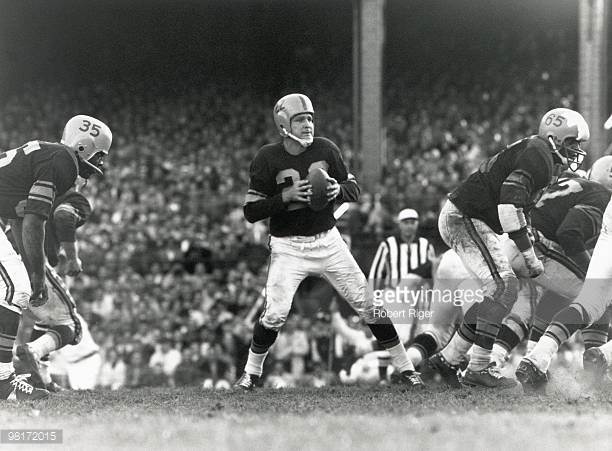 We’ll start today off with quarterback.

We referenced Layne the other day when ESPN asked fans to rank the best quarterbacks in franchise history. Layne came in third, as he should be, but I’m sure many fans wouldn’t have thought of him if prompted. Layne was a dying star when he was traded to Pittsburgh but like the ones in the sky, he burned bright.

The late 50s, early 60s Steelers are not thought of being successful. In 1955 and 1956, the team couldn’t best .500. When Layne was traded after two games, the team went 7-2 under his command. His old team, the Detroit Lions, were put under his curse, the quarterback exclaiming they wouldn’t win a playoff game for 50 years. 59 years later, they still haven’t.

It took Layne several games to get used to his new teammates but when things clicked, they clicked. He threw for 265 yards and a pair of scores to beat Washington in Week 6 and followed that up with four more to beat the Eagles. Pittsburgh didn’t lose in their final seven games, winning six and tying the other.

He was king of the long ball, posting gaudy looking averages. In ’58, he threw for a franchise record 409 yards on just 23 completions, over 17 yards for each one . Those 409 yards wouldn’t be broken until Tommy Maddox threw for 473 in 2002. Terry Bradshaw never even came close to four bills.

Talent alone, Laybe was one of the best quarterbacks of his era. The original Brett Favre, he wan’t the hardest worker or biggest film room junkie. He’d drink his teammates under the table, party all night, and not miss a beat on Sundays. The rest of the Steelers – and the league – had trouble keeping up with him.

One story that sums him up. Layne crashed into a streetcar before his final game in 1962. He would tell the story nearly 20 years later, transcribed by the Chicago Tribune after his death in ’86.

““Knocked it off the track, just like they wrote,“ he said. “But it wasn`t at dawn, like they keep writin`. I`d left the party about 10:30 because I wanted to do real good in the game the next day. Next thing I knew I was bleedin` in the hospital and there were reporters all over the place. I got out of the hospital and played the whole game. The worst part of the whole thing was I finished second that day and it was my last game.`”

It was, however, a game the Steelers won, beating Washington 27-24.

In five seasons with the team, Layne went 27-19-2, making him the first winning QB in franchise history. He threw 66 touchdowns in 55 games and rushed for eight more. There were , to use a contemporary term, a freakin’ buttload of interceptions – 81 in all – but Layne carried the team on his back. Always on Sundays, sometimes on Saturday nights, too.

““He was a unique leader,“ said Yale Lary, who played on the great Detroit teams with Layne and later joined him in the Hall of Fame. “When he said block, you blocked. And when he said drink, you drank.“”

Quarterback. Drinker. Winner. They don’t make ’em like they used to.