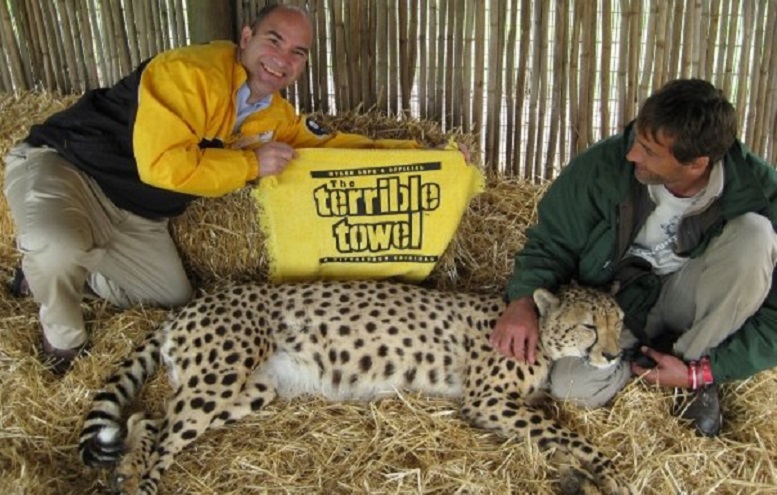 Name a place where have you taken your Terrible Towel.

The Terrible Towel is a talisman that has become known throughout the NFL. The average Pittsburgh Steelers fan knows that the towel was the brainchild of Myron Cope back in 1975. It started out as a call for fans coming to Three Rivers Stadium to grab black or yellow hand towels or wash rags from their linen closets to cheer the team on. It debuted in a December 1975 playoff game against the Baltimore Colts. Several players including Jack Ham, Ernie Holmes and Andy Russell did not buy into it saying, “we’re not a gimmick team.” Perhaps the 28-10 victory that included Andy Russell’s 93-yard fumble recovery return for a touchdown changed their minds (that ball can be seen in the Steelers’ Walk of Fame lockers at Heinz Field). Here is a link to the Steelers history about the Terrible Towel:

In any case, what began as a voluntary raid on our linen closets was soon monetized. Gimbels Department Store (RIP) began selling some of the first Terrible Towels in 1978 since there was a constant run on their black and yellow hand towels. Forty plus years later the Terrible Towel is still going strong. Most know that a portion of the proceeds go to charity.  The specific charity is the Allegheny Valley School a non-profit hat provides services to disabled persons. What less people know is that Myron Cope’s autistic son Danny was a resident there since being a child.

Myron Cope is given the lion’s share of credit for conceiving of the Terrible Towel, but like all great ideas there is often some underlying inspiration. In this case, I believe it came from a completely different sport. In the early 1970’s Pittsburgh was still very much a baseball town. Transformation to a football mad city was underway. The Immaculate Reception made on December 23, 1972 being the main catalyst followed by the Steeler’s first Super Bowl victory two seasons later accelerating the change. But the Pittsburgh Pirates had just won the World Series in 1971 overcoming a 2-0 deficit to the heavily favored Baltimore Orioles who had FOUR pitchers who won 20 games or more that season. Roberto Clemente, who was much loved in the city while being accused of being a malingerer by some at the same time (welcome to Pittsburgh), was the Series MVP. The Steelers were third in sports popularity in the Burgh but quickly gaining on Pitt Football after going 16-56 between 1966-1972.  The Immaculate Reception was a triumph for the city of Pittsburgh but we often forget that just eight days later the tragic loss of Roberto Clemente occurred while he was flying relief supplies to Managua, Nicaragua following a devastating earthquake. He insisted on going on that flight during a storm because he wanted to make sure that the donated supplies got to the people who needed them the most.

Being a Pittsburgher, Myron Cope had to have been impacted by the Pirates, their recent success and their lore. Before Cope, the most famous sports announcer in Pittsburgh was gravelly voiced Bob Prince, the Gunner. As a young boy, I had moved to Maryland in the mid 1960’s with my family. A yinzer with Buc Fever that my new classmates in the DC suburbs could barely understand. I did find a few buddies who were also from the Pittsburgh area who were part of that early diaspora. In the evenings, we would tune our radios to KDKA which could still reach us 200 miles away. I guess the FCC was not so strict on the power emanating from the signals in those days. The broadcast was usually a bunch static with every third word being discernible. That is, until Bob Prince spoke. Somehow; his rough guttural voice somehow cut through the static clear as day and we could enjoy Pirate broadcasts into the evening.

In 1966, Prince introduced the Green Weenie as a hex against opponents while simultaneously a charm for Pirate players. The story goes that Prince was inspired when Pittsburgh Pirates trainer Danny Whelan waved a green rubber hotdog at Houston Astros pitcher Dave Giusti pitching to a Pirate and told him, “you’re going to walk him!” Which he promptly did. Now, no one asks what Whelan was doing with a foot-long green rubber hotdog at a game; and was it even a hotdog? What is remembered is that the Pirates won the game and a new fad was born. I call it a fad since it just did not last. Pirates fans started with long green balloons but soon plastic green weenies were manufactured and were seen in numbers at games from 1967-1974 then poof. Myron must have certainly been aware of the green weenies just as he was the next charm: Babushka Power. As the popularity of the green weenie waned; Prince had a new marketing idea. Quite a few older women still wore babushkas into the 1970’s; so, Prince asked all female Pirate fans to wear babushkas to the games and wave them to rally the Pirates. Babushka Power did not last but the visual effect of all those head scarves waving must have had an impact; the next December the Terrible Towel was born.

Football used to be a Fall sport. Today, thanks to NFL marketing and thee average fan’s willingness to follow; it is a yearlong event. The Terrible Towel has followed suit; once pretty much restricted to being carried to home games at Three Rivers Stadium; they are seen at fields throughout the league as visiting Steelers fans make their presence seen. It has even transcended to other sports as you see the Pittsburgh Penguins with their version of the Terrible Towel and opponents like the Nashville Predators wrapping a catfish in a terrible towel in an attempt to nullify its power. Other teams have tried to emulate the towel with giveaways on gameday. Alas, sadly, they usually pick white that look like so many flags of surrender as they are meekly swished to and fro among a sea of Black & Gold towels whirling & twirling feverishly away.

The Terrible Towel has become a yearlong activity too. Almost any spot-on earth may have been blessed with presence of a Terrible Towel – even out of the world since it was taken to the International Space Station. Combat zones; wonders of the world; Mount Everest, below the sea; anywhere and everywhere average Steelers fans can be seen with their towels. Here is a Terrible Towel photo gallery  from the Steelers website.

My own Terrible Towel(s) has been to quite a few places – how about yours; where have you waved it? Either humble abodes or manses proud; no matter; wave the Terrible Towel.

Just one tune today on a nice warm day that started out cool; it’s getting to be that time for Mungo Jerry doing In The Summertime