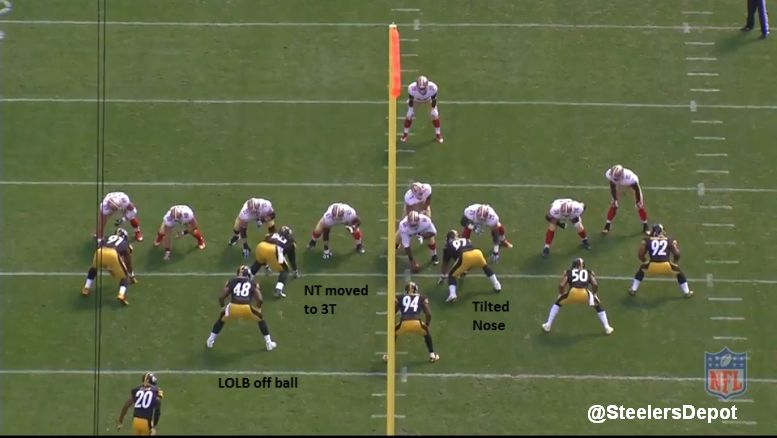 I don’t know if Keith Butler is one of your favorite coaches on the Pittsburgh Steelers but I do think he is one of the most honest and willing to talk X’s and O’s of the big three (Tomlin, Haley, Butler). He had a lengthy Q&A session with the media during minicamps. Much of the discussion revolved around the secondary and coverage changes, stuff we already wrote about, but there was a moment that seemed to veer towards the team’s use of their over front.

“A lot of times in basic situations, meaning first or second down, we like to match up the tight end on Cam, on Tuitt, those guys,” he said, via the team site. “That turned out to be a real good defense for us last year in terms of average numbers they produced. In terms of the running game and passing game. So we’ll continue to develop that.”

This was an idea introduced early in Butler’s tenure, traced all the way back to Week Two of the 2015 season versus the San Francisco 49ers. As Butler hinted at, and we’ll expand, it primarily came against 12 and 13 personnel, multiple tight end sets.

Here’s a look at it from that 49ers game, which is also in the headline photo up above.

The regular nose tackle is moved to the three tech of the strong side of the formation. The weakside end becomes the tilted nose, Joe Greene has origins in doing that, and the strongside end aligns to the tight end’s outside shoulder. The backside linebacker is on the LOS and the strongside comes off the LOS, essentially making it a 4-3 look.

It’s an idea that isn’t used often over the course of the season because the circumstances have to align. A run situation, a team that’s successful on the ground, and teams that go heavy at tight end, as opposed to ones that live in 11 personnel. But it’s been an overall successful wrinkle and something Butler deserves credit for.