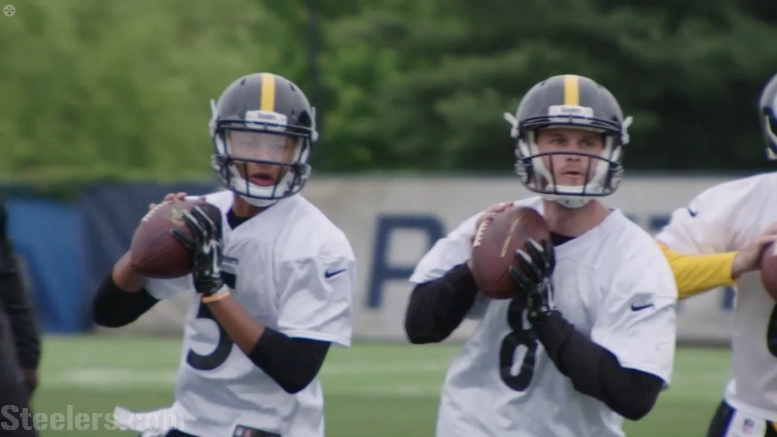 Arguably the one thing about Pittsburgh Steelers rookie fourth-round draft pick Joshua Dobbs that we felt pretty comfortable would not be much of a worry would be his ability to learn the offense. As we head toward training camp, however, it seems that his learning curve hasn’t been as steep as even he anticipated.

“Well coming to this setting they actually showed me that we ran a lot of traditional offense in college” the quarterback recently told Jacob Klinger. “We ran the same play, same scheme, same progressions, the same runs that I’ve run in college, whether it’s red zone or in the field so it’s a little different, of course, in a huddle rather than getting signals from the sideline”.

In other words, the Tennessee passer was surprised to find just how much he was already familiar with when it comes to what he will be asked to do at the professional level. “Outside of [being in the huddle] it’s still the same plays, still the same scheme, still the same type of verbiage I was running at the college level to help me translate over to the NFL level”.

While it might not seem like much, I happen to think that this is an especially important point for a young quarterback who is coming into the game known to have some mechanical issues that are going to need to be adjusted.

Without having to worry all that much about learning an entire new offensive system, Dobbs and his coaches can pay greater attention to working on his mechanics and in working to build a stronger rapport with his teammates.

Of course, he will still be constantly in the play book, and even for a rocket scientist, so to speak, there will be times where he will be thinking on the field. Entering a new environment no matter what the field is enough to make anybody’s head swim until you get acclimated to your new environment.

But the transition has gone pleasantly well so far, from the sounds of things. Even quarterbacks coach Randy Fichter told Klinger that it’s evident Dobbs has “been exposed to a handful of things” that he wasn’t expecting him to know. “He’s seen things”.

He added, “whatever new concepts, he’s sharp enough to figure that out”.

Fichtner also mentioned to the reporter that on the days in which Ben Rethlisberger rested in the spring, the team did give the rookie quarterback some reps with the first-team offense, though on those days he primarily worked with the second team, and when all quarterbacks were participating, his line was with the third-team group.

Ideally, Dobbs is a player who is never going to even see the field until after Roethlisberger retires, barring mop-up duty in a blowout victory, or in a meaningless regular-season finale with their divisional championship and seeding already locked into place. But it would be better to have him ready to go as soon as possible. Of course, first he has to work on unseating Landry Jones.