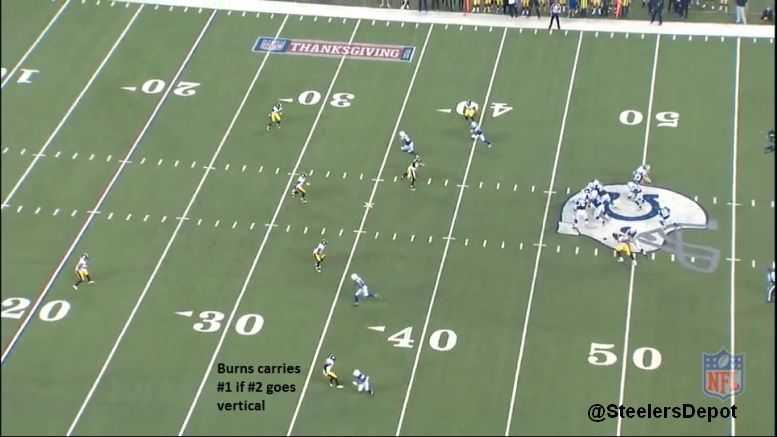 Kicking off this week with another Film Room. Know you guys have been asking for more of this and I love you all for it. My favorite topics to write about.

Keith Butler had a lengthy conversation with the media during last week’s minicamp. Much of it revolved around schematic changes in the secondary. Playing more man, which is easy for anyone to understand, but he also spent a minute talking about pattern matching, or a “matchup zone,” as he referred to it.

Here’s what he said, via Matthew Marczi’s article on the subject.

“We just need to enhance our matchup zones. Matchups zones to me is like a man-to-man coverage”, Butler told reporters. “You match the guy when you figure out whether he’s one, two, or three. We count from the outside in whoever becomes one, two, or three. Those type of things we’re matching on”.

We’ve written about the concept a lot. Including recently. Then, we discussed perhaps his most common match, Palms, with the outside corner trapping the #2 (slot) receiver on any out-breaking route.

There are times where the team matches without it even looking like it. Today, we’re going to look at a simple example.

Here is one of the Steelers’ pattern matches out of an inverted Cover 2 look. You probably know the basics of Cover 2; the corners sit in the flats, two high look, the MIKE ‘backer getting depth. That is part of what we see on this play against the Indianapolis Colts. But pattern matching tweaks the look. 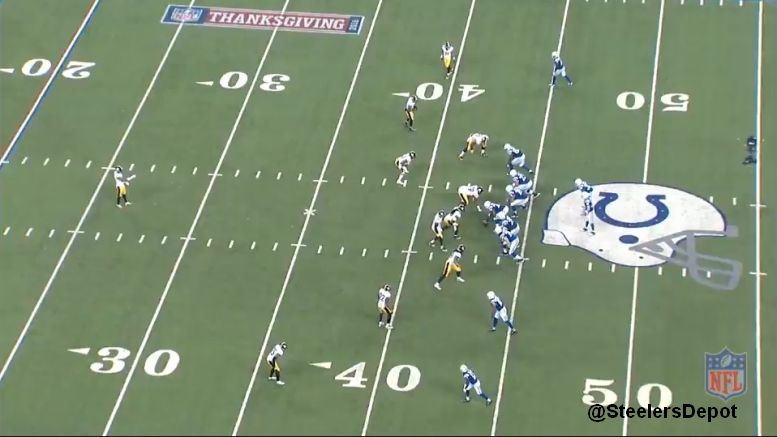 Pittsburgh is trying to disguise their look as best they can. It looks like Cover 1 pre-snap. Perhaps a safety blitz by Mike Mitchell, something you see against a lot of 2×2 sets. But the secondary rotates on the snap of the ball. Sean Davis moves to his Cover 2 landmark, two yards to the inside of the numbers and Ross Cockrell gets depth, becoming the inverted safety. A sky look, the safety (Mitchell) with less depth than Cockrell, the corner. 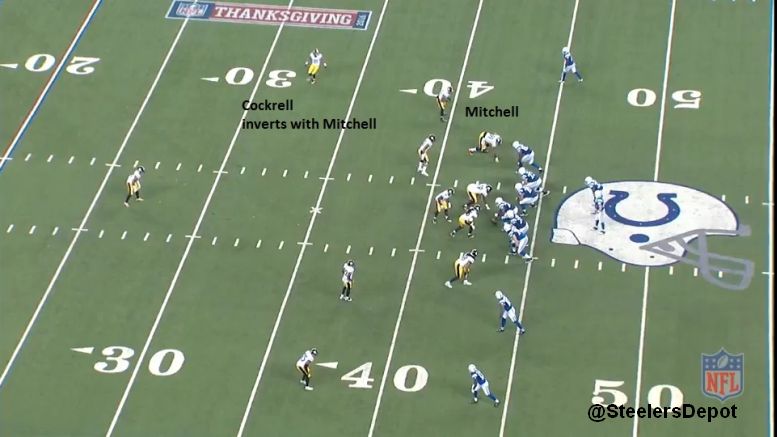 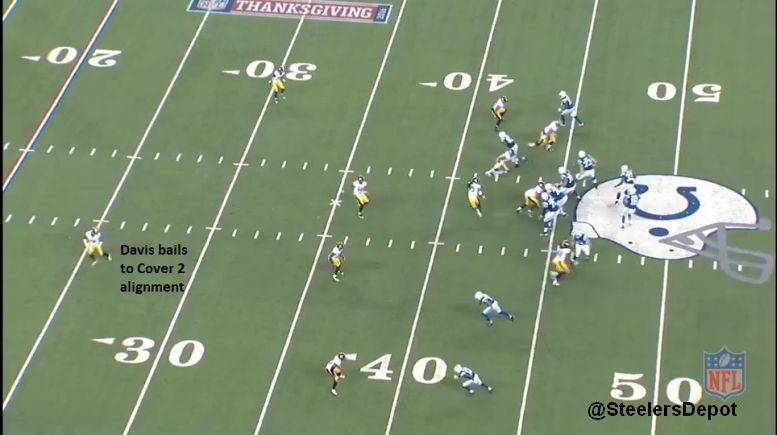 You see the pattern match to the bottom. Cover 2 and Cover 3 are vulnerable to four verticals. In a spot dropping Cover 2, the corner would funnel the #1 receiver inside to his safety help and sit in the flat. It’s vulnerable though to vertical concepts. Because if both #1 and #2 release vertically, as they do on this play, who will pick both up? It’d be two receivers versus one safety, big trouble for the defense.

If #2 would have jumped out, then yes, Artie Burns would have trapped him, passing off #1 to the safety. That’s the essence of pattern matching. You’re playing a man. You just don’t know who until the receivers declare.

But they both go up, so Burns takes all of #1 vert. 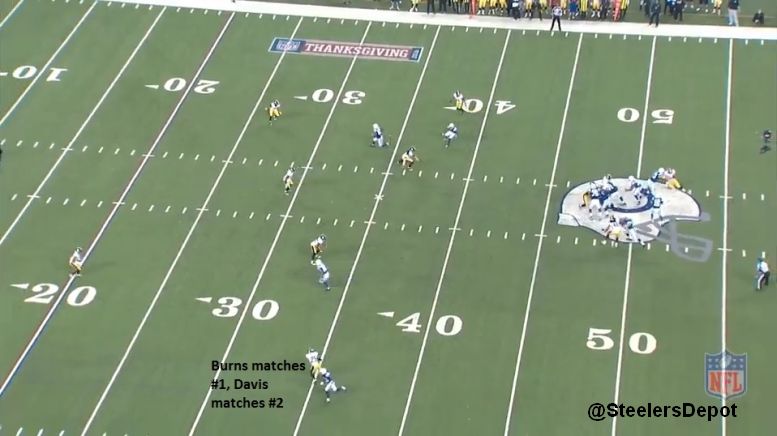 Now check the top of the screen. Mitchell rolls into the box as the sky safety, playing the flat. As #1 sits inside on the curl, Mitchell’s football IQ comes into play. With #1 on a curl, you have to be alert for common route combinations off it. What is one of the most common with #1 sitting? Smash, #2 running a corner. So Mitchell immediately begins to get depth and look to squeeze any potential corner route off. 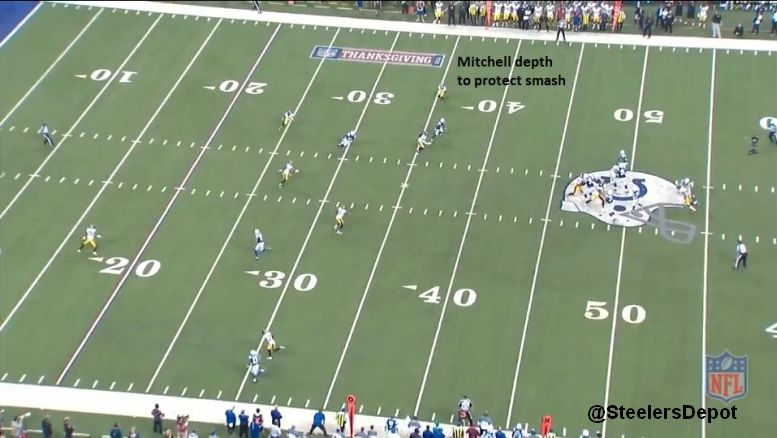 Of course, no corner route ever comes. Dwayne Allen runs a dig instead. Lawrence Timmons, in his usual MIKE depth, is able to keep vision on the route and the QB, driving on the ball. 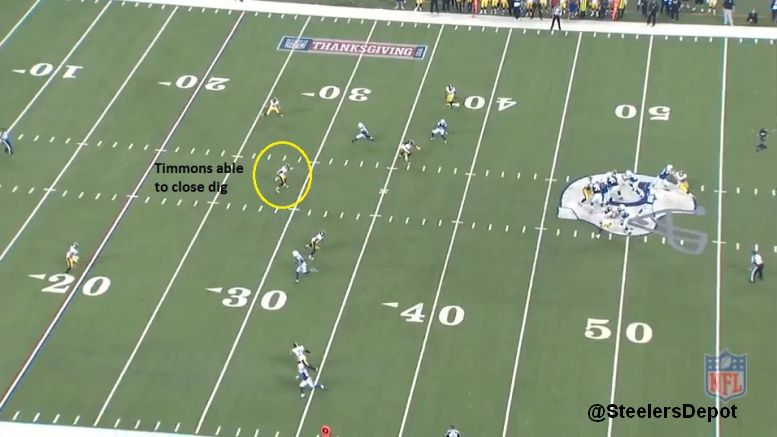 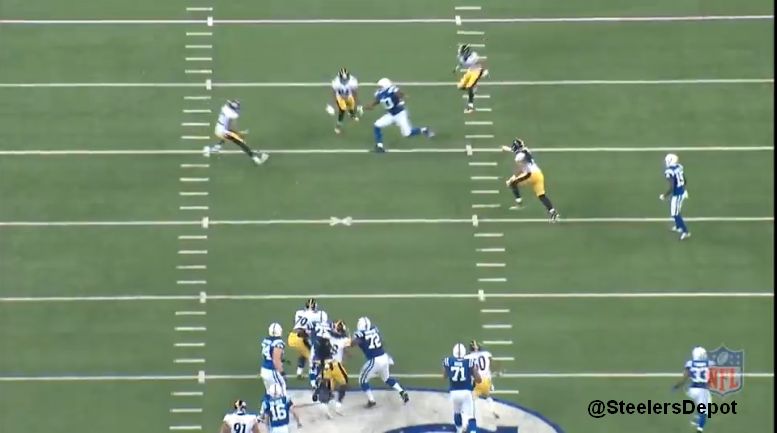 It’s slightly off target anyway and falls incomplete. Steelers get off the field on 3rd down (Colts would convert on a 4th down fake but ehh, let’s pretend that didn’t happen).

On paper, it might look like just straight Cover 2. Or even Cover 6. But pattern matching, and any sophisticated NFL coverage – which they almost have to be at this point – has a ton of moving parts on each play.

Ideally, this is what the Steelers defense will look like in 2017. Clearly, they want to run a lot of Cover 2. They did more of that than any other team last year. But a straight Cover 2 is tough to run in the league present day because of its simple, obvious vulnerabilities. Marrying this coverage with something more exotic like pattern matching is what this defense needs. When it all works together, it’s a beautiful thing.