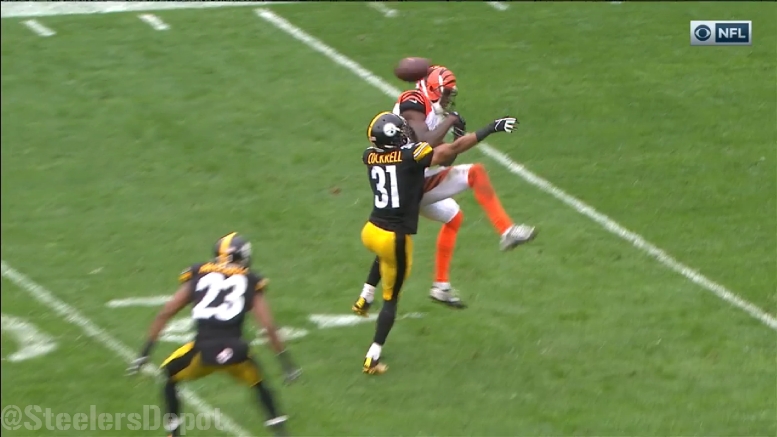 Pittsburgh Steelers cornerback Ross Cockrell is entering his third year with the team and with nearly all the OTA practices now behind him, the Duke product talked Wednesday during an interview on Steelers Nation Radio about a few of the things he’s been working on this offseason.

“Well, strength is a big part of it, obviously, because of some of the size of the receivers that we play,” Cockrell said. “You go up against the Dez Bryants, the Martavis Bryants, those guys are big and strong and they’re physical. And so, you have to make sure that your body’s right for the grind of the season. But other than that, I’ve got to make sure that my eyes are disciplined enough so that I can make more plays on the ball.”

While Cockrell started every game for the Steelers last season and ultimately led the team in passes defensed, he failed to record an interception and thus it’s not a surprise that he’d like to be able to make more plays on the ball in 2017. He was also asked Wednesday what kind of receivers he enjoys covering the most and while he did indicate that he enjoys going against a shifty wide receiver like teammate Antonio Brown in practice, he said in games he prefers to cover bigger wide receivers.

“I like the big guys,” Cockrell said. “The big guys aren’t as shifty and you know what you’re going to get. They’re just going to try to muscle you all the way around the field and the guys like Brandon Marshall and the Dez Bryants, those are the guys that just want to push you around and I enjoy that, because I can gear up for the fight.”

Cockrell also talked a little Xs and Os on Wednesday during his interview as he was asked to explain what match-up zone coverage entails.

“Match-up zone is a man scheme within a zone. We have all three [kinds of coverages] and when we do play our match-up zone, there are man-concepts within a zone, Cockrell explained. “So, you might not be chasing a guy all the way across the field, but if he comes up about 10 yards, you buy him, and that’s yours and then you may have to run across the field.”

In case you missed it, Alex Kozora recently wrote about this coverage.

2017 will be Cockrell’s second season playing with fellow cornerback Artie Burns, who the team drafted in the first-round last year and he was asked to comment on what he’s learned about his teammate so far.

“One of the things that I noticed right off the bat with Artie is that he’s a fearless player,” Cockrell said of Burns, who registered three interceptions and 13 total pass breakups during his rookie season. “He wants to go after it, he wants to go big and sometimes you got to learn when to take that chance, sometimes you got to learn when to make the tackle.

“But one of the things that I’ve seen coming up now in the OTAs and stuff is that he wants to be a leader and that’s a great thing for me because him and me now can just bounce off each other ideas, what are we seeing on the field. His football knowledge has really gone up.”

As for two of the younger cornerbacks on the roster, Senquez Golson and Cameron Sutton, the Steelers first of two third-round draft picks this year, Cockrell was also asked to comment on what he’s seen out of them so far this offseason

“Well, from both those guys, they’re coming in, they’re not taking a backseat to anybody. They’re putting hands on receivers, they’re getting after the football, so, that’s the main thing that you want to see right now at this moment,” Cockrell said “It’s just guys that are going to step in and be ready to compete. So, we’re seeing that from both of them and then once we get to Latrobe and we put the pads on, when real football starts, we’ll see who’s going to put their nose in there. And then of course the durability is going to be something. That’s a stat that you can’t really measure, but it’s key for this game.”

As things stand right now, Cockrell appears to be on track to remain a starter in 2017 after signing a one-year restricted tender earlier in the offseason. It will be interesting, however, to see if either Golson or Sutton can eventually wrestle the job away from him.