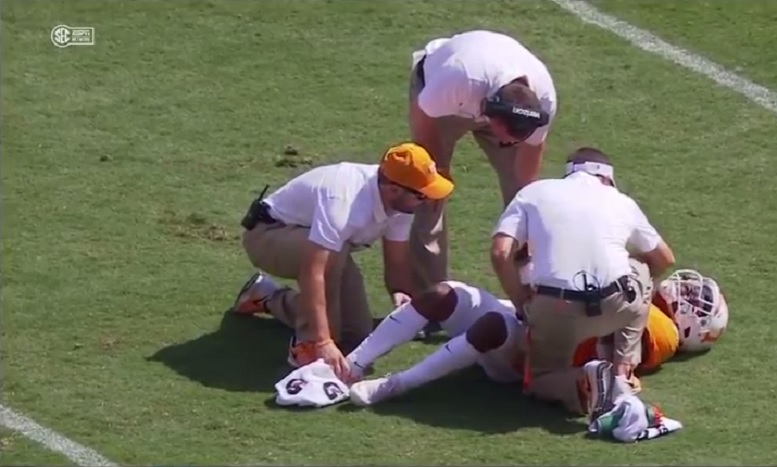 When it comes to evaluating Pittsburgh Steelers third-round cornerback Cameron Sutton, one aspect that I happen to think seems to be getting glossed over a bit too much is the fact that he played through most of his senior season through an injury. Many have been quick to remind me that Anthony Chickillo suffered an ankle injury last year and will be amazing this year. Sutton played through an ankle injury as well, and that is obviously going to show up on tape.

The Volunteers came out of their September 17 contest with Ohio victorious, but in doing so they also lost their best cornerback when Sutton suffered a fractured right ankle in the first quarter of the game. When the injury occurred, Tenneseee still had a lot of football left to play. That was in Week Three.

He was expected to miss two months due to the ankle injury, but he attacked his rehab process vigorously and was able to return a week sooner, participating in their final four games of the season, but he missed six of them.

That was something that caught the Steelers’ eye, and General Manager Kevin Colbert talked about it during their post-draft press conference. “He had an injury issue the last year that he came back from, which was impressive for a senior”, he said.

“In that climate last year when kids weren’t finishing bowl games, this kid made an effort to come back and play in their last game and their bowl game. We were very impressed with that”. As noted, he actually played in Tennessee’s final three regular season games—one more than he was expected to be able to—and he chose to participate in their bowl game, a victory over Nebraska.

During his conference call, Sutton was asked about his ankle injury and how the recovery process went, and he told reporters that he didn’t really feel 100 percent back until he participated in the Senior Bowl, after the season was over.

It’s very possible that if Sutton chose to forgo his senior season and entered the draft as an underclassman, he would have been drafted in the second round, perhaps even bordering on a late-first round pick, similar to Artie Burns. Between his sophomore and junior years, he had four interceptions with 19 pass deflections in 26 games, getting his hand on nearly one ball a game despite the fact that teams tried not to throw in his direction.

“Just the opportunity to get back out there is something that I don’t take for granted and it’s a true blessing”, Sutton said after he got back from his ankle injury. He was even telling his coaches that he wanted to come back two games earlier than he actually did return—perhaps if they allowed he, it would have been out there hobbling around to be out there with his teammates. That’s the kind of player he is.