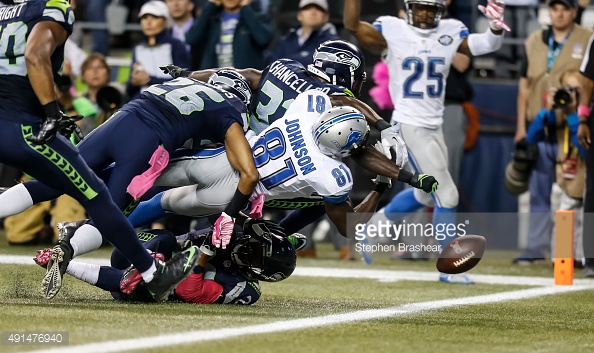 Maybe it’s just been me, but it seems to have been a while since we have heard much of former Lions wide receiver Calvin Johnson since he retired. But he made some news recently due to comments that he made following a football camp that he hosts in Southfield, MI.

Concussions suddenly became the topic du jour after Tom Brady’s wife told a reporter that the New England Patriots quarterback suffered a concussion during play in the 2016 season, even though he was never reported to have had one. This drew some controversy, and even prompted a response from his agent that contradicted his wife, but the topic was breached, and Johnson commented on it as well.

“Guys get concussions, they don’t tell the coaches”, he said during his football camp. He acknowledged including himself in that category as well, saying, “it happens”. Why? “I don’t tell the coach sometimes because I know I got a job to do”, he said. “The team needs me out there on the field. And sometimes you allow that to jeopardize yourself, but that’s just the nature of the world”.

This certainly is not something the NFL will have been happy to read, as, at least on the public relations front, this is precisely the sort of attitude that they are attempting to eliminate from the game, even asking players to self-report concussions, which is something that Pittsburgh Steelers quarterback Ben Roethlisberger has done in recent years.

As Dave Birkett noted in the article from the Detroit Free Press from which the above-quoted passages are transcribed, Johnson did tell ESPN last year that he has had his “fair share” of concussions, in spite of the fact that he had never been formally diagnosed with one.

“They’re going to dispute that, but anytime you black out, anytime you hit the ground and everything is stars and stuff, any time your brain hits your skull, that’s a concussion”, he told reporters yesterday. “No matter how severe it is, it’s a concussion. Now granted, some people get nausea. That’s a severe concussion when you get hit like that and you get nausea and stuff like that. But if you play football long enough”, he concluded, it is virtually assured that you will have a concussion or two.

So why is he talking about this, other than the fact that it became a current topic of discussion? Because it’s something that he wants to communicate to the young players that he works with at his football camp every year. Because he knows how important it is to get the message out, and clearly.