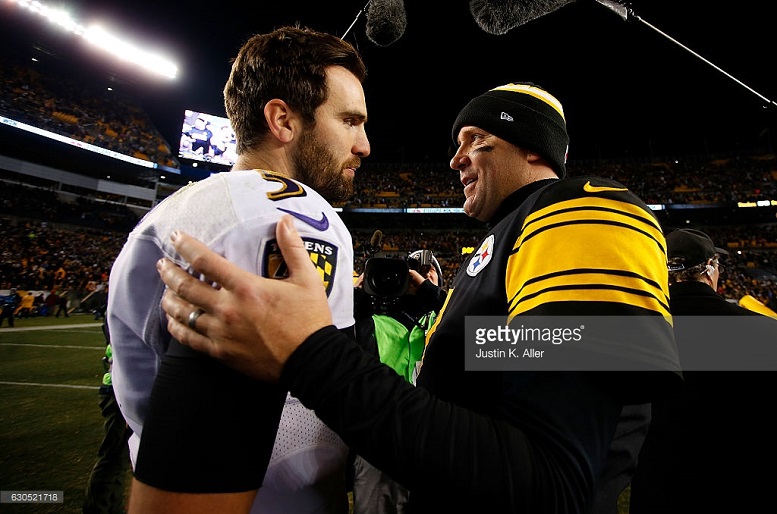 Much like I started last summer here at Steelers Depot, I’m bringing back the “Ranking the Rooms: AFC North” series for a second go-around here in the slow days off the off-season.

Kicking things off today, we’ll start at the very top once again with the most important position group in all of football: the quarterback room.

When you have easily the best quarterback in the division and arguably one of the top 5-10 signal callers in the league (add in a lock for the Pro Football Hall of Fame) and it makes the No. 1 selection for Ben Roethlisberger and the Steelers quite easy.

Roethlisberger hinted at walking away from the game this off-season, so who knows how long he’ll continue to run the show for the Steelers’ offense, but for now he’s head-and-shoulders better than any quarterback in the AFC North.

Behind Roethlisberger, Landry Jones is a steady backup and knows the system well, but he’s not a long-term option in case of injury or Roethlisberger’s retirement.

Rookie Joshua Dobbs brings a name to the room behind Roethlisberger and Jones, so it’ll be interesting to see how he develops moving forward, but for now it’s clear that the Steelers are the cream of the crop in the AFC North when it comes to quarterbacks.

Joe Flacco has been hit-or-miss the last few seasons for the Ravens and has dealt with injuries in that span, but for now he’s easily the second-best quarterback in the division behind Roethlisberger, especially after Andy Dalton fell off big-time last season without a deep receiving corps and a bad offensive lien in front of him.

With Flacco, he’s a dink-and-dunk guy that relies on after-the-catch action from his receivers and running backs before taking shots down the field. He’s called Check-Down Joe for a reason.

Despite sitting at No. 2 now, Flacco and the Ravens could fall behind the Bengals at No 3 if Dalton and the Bengals make a major jump next season with the offensive weapons Cincinnati has added, while the Ravens have lost a ton of weapons on the outside, including the retirement of Steve Smith Sr.

For as capable of a starter Flacco is, he needs serious weapons to work with. I don’t think he has much outside of the tight end room right now. It could be a tough year for Flacco.

Behind Flacco, Ryan Mallett is a proven NFL starter who has seen plenty of action on the field. Mallett has a big arm and can fill in for Flacco in spots, but he’s not a serious threat for other teams. That being said, he’s up there in terms of capable backups across the league.

Second-year pro Dustin Vaughan is an afterthought with the Ravens.

As most of you know, I’m a big fan of Dalton. I think he gets the short end of the stick when it comes to evaluating his game because he’s undersized (and probably because he’s the Red Rifle), but he’s a good NFL starter for a franchise that was consistently good over the last four years before falling off a cliff last season.

A majority of that didn’t have to do with Dalton. The Bengals let Marvin Jones and Mohammed Sanu walk, while neglecting to search for upgrades at center and right tackle along the offensive line.

Add in the struggles of Jeremy Hill, the loss of Gio Bernard to injury and the offensive line’s inability to hold up in protection for Dalton and it’s easy to see why the veteran quarterback struggled.

After drafting John Ross and Joe Mixon, the Bengals got Dalton better weapons to work with, but once again the offensive line will be awful.

Behind Dalton, AJ McCarron is a proven backup that helped get Cincinnati into the playoffs a few years ago before being knocked out by the Steelers in the Wild Card game, but he has that experience.

Should Dalton go down, Bengals fans should feel comfortable rolling with McCarron for long stretches.

For the second straight year the Browns are the worst QB room in the AFC North.

However, there appears to be a light at the end of the tunnel.

Cody Kessler played really well as a rookie last season despite missing time due to multiple concussions and injuries, but he showed flashes of a young Dalton under Hue Jackson from his Cincinnati days.

Kessler should start the year as the No. 1 guy for the Browns, but rookie second-round pick DeShone Kizer is the clear future piece for the group.

I liked Kizer a lot coming out of Notre Dame. He has a big arm, the right build for the position and the right mindset. I can’t wait to see him develop under Jackson and his offensive staff.

He has a chance to be something special down the line.

Brock Osweiler was arguably the worst starting quarterback in the NFL, but the Browns had a long-term plan in trading for him by acquiring the Houston Texans’ second-round pick in the 2018 NFL draft to take on Osweiler’s enormous contract.

I doubt Osweiler sees much action on the field for the Browns at any point in his tenure with the franchise.

Second-year quarterback Kevin Hogan was alright for the Browns in spot duty last season, but I just don’t see a ton there with him long-term for Cleveland.