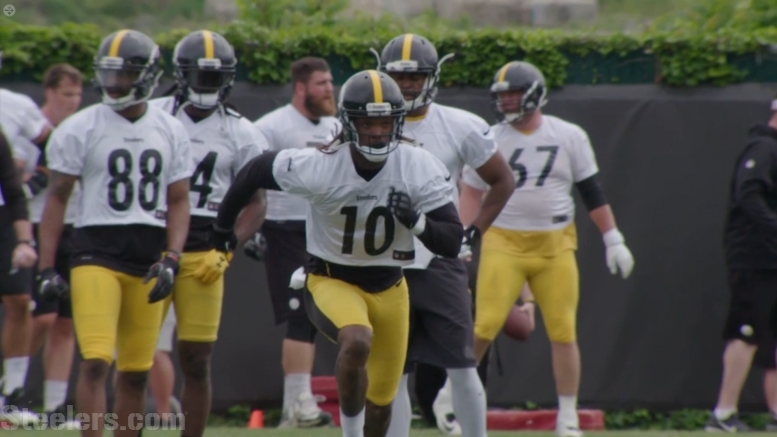 I don’t doubt for a second that there are still some hurt feelings, some trust issues, and some fences to mend in the Pittsburgh Steelers when it comes to wide receiver Martavis Bryant and his relationship with his teammates, his coaches, and the ownership, all of whom he knows quite well that he has let down in the past couple of years with his off-field indiscretions.

The former fourth-round draft pick may have been given first-team snaps in his first practice back on the field, but he knows that everything has to be earned, and re-earned, and he is not taking anything for granted. He knows that he has a lot to prove, as much to himself as to others.

But one person he doesn’t have to worry about winning over is offensive lineman Ramon Foster, whom he credited two days ago, along with Maurkice Pouncey, in being critical in helping him while he was in rehab during his suspension last year.

“He doesn’t have to prove anything to me”, Foster said of his young teammate during a sit-down interview with Missi Matthews on the field of the UPMC Rooney Sports Complex recently. “You know, he has so much going on with himself that there’s no need to add any pressure to his situation. Just Maurkice and I talking to him in the offseason when he wasn’t around, you know, you need a lot of help when you’re dealing with that type of stuff”.

Foster has been an ambassador for the team inside and outside of the locker room for the past several years, so it should be no surprise to watch him take the reins to help out a troubled teammate. He is the team’s player representative for the NFLPA, and has been awarded by the local media for his relationship with reporters.

But he knows that his greatest role right now is that which he holds to Bryant as he works his way back into the good graces of many, and gets a firm footing on this new chapter of his life. Both of them know it won’t be easy.

“We downplay it in a way”, Foster said of Bryant’s situation, “but it’s a serious matter, not just for him, but his family and his support group, in that he needed a support group too, so I’m glad that Pouncey was there also for him”.

Matthews asked him about how Bryant has been received in the locker room so far and if there were concerns about how his teammates were accepting of him, but according to the veteran lineman, it hasn’t been a problem—or really even come up.

“Nobody’s even mentioned it”, he said. “If anything I feel like the masses are excited. They see him out here, they see how he looks—he looks like a frickin’ made-up player”, he said of his seemingly improbable physical stature. “You could tell his demeanor’s different and there’s nothing to prove to anybody”.