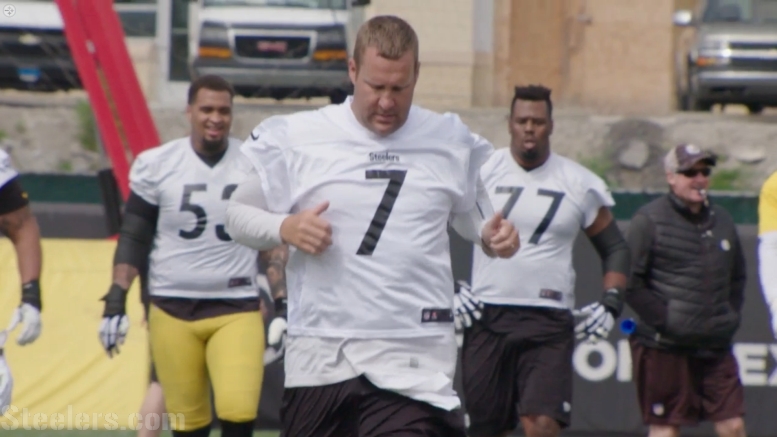 It was at some point last season I believe that Maurkice Pouncey said—presumably somewhat jokingly—that when Roethlisberger goes, he is going too. Roethlisberger is 35. Pouncey will only turn 28 in July, and he still has a few years left on his contract.

But whether or not it was sincere, it does speak to the bond that the quarterback shares with his linemen, and it’s something that Ramon Foster echoed yesterday in sitting down with Missi Matthews out on the field at the UPMC Rooney Sports Complex to discuss a number of topics, one of which being Roethlisberger’s decision to return for the 2017 season.

Foster, the team’s player representative for the NFLPA and often one of the primary conduits between the locker room and the media, has always been a thoughtful speaker and has even been given an award for his relationship with local reporters.

With that thoughtful approach is also reflected a macroscopic understanding of the game that they play, and we see that in his comments. He said that it’s “awesome” that Roethlisberger chose to return for the 2017 season, noting that “an organization goes as a quarterback goes”.

“For Ben to say that he’s committed the way that he is that’s all the confirmation we need as to what we want to get done this year”, he said. Foster understands better than anybody just how close the Steelers came. He is the only player remaining who came in during the 2009 season and has been here the entire time.

That was the year after the Steelers won their most recent Super Bowl, and the year before they were last there, and lost. Since then, they have had two non-playoff seasons, a pair of one-and-dones, and finally returned to the doorstep of the Super Bowl last season. So he knows what it means for Roethlisberger to be back for more. And he doesn’t want to see that end.

“We’ve got secret agreements with him that he can’t leave until some of us leave too, so hopefully he sticks around for a while”, he joked with Matthews, echoing what Pouncey said a year ago. It might be worth nothing that Foster, at 31, is the oldest of the linemen, though both of their tackles are or will be 29 during the 2017 season.

I have no doubt that the fact that the Steelers have stability along the offensive line is a big reason why Roethlisberger is still hungry for more. Much in contrast to earlier times in his career, he was only sacked I believe 17 times last year, the lowest rate of his career, and the team as a whole finished second in the league in sacks allowed.