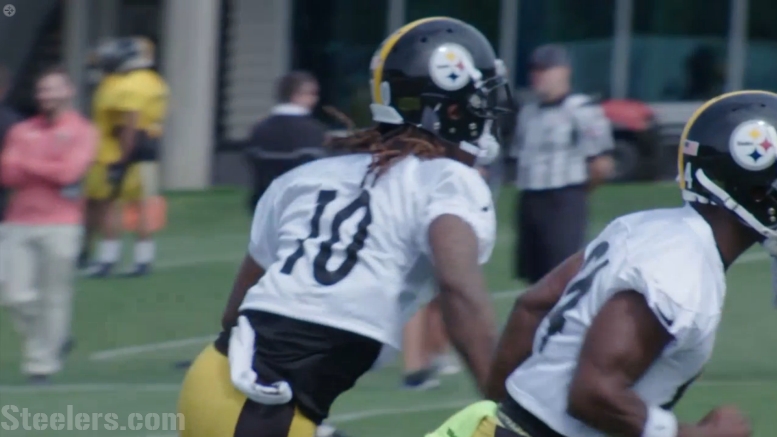 “It’s still going to take time”, Martavis Bryant told reporters yesterday on the first day of the second week of OTAs for the Pittsburgh Steelers. He is talking about rebuilding a rapport on the field with quarterback Ben Roethlisberger, but it could apply to so many different aspects of his return to football after serving a suspension for over a year.

Jeremy Fowler wrote yesterday that Bryant admitted he was able to make some plays in practice on the day, but he seemed more interested in the things that went wrong than what went right. Still, he was confident that “with the work put in, the chemistry will come back”.

The two, of course, had an obvious chemistry in the wide receiver’s first two seasons in the league, even if Bryant was still raw in many aspects, which included dropping passes, rounding out routes, and simply running the wrong routes.

But the last time he was on a football field, in the road against the best defense in the league, without the best wide receiver in the league opposite him for the first time in his career, he posted arguably his best game, or at least one of the best, catching nine passes for 154 yards against the Broncos in the Divisional Round of the 2015 playoffs.

During the regular season that year, he caught 50 passes in 11 games for 765 yards and six receiving touchdowns. He had eight receiving touchdowns in just 10 games played during his rookie season. And that was before he was truly dedicated to the game.

Of course, he is in many ways starting over right now, so he knows he can’t simply pick up where he left off. He has to build back up not just himself, but also his on-field relationships with his teammates, none more important than that of the rhythm between wide receiver and quarterback.

“All I know is with trust comes consistency”, he told reporters on the day. “As long as I handle my business, the rest should come back. I’m not going to stress over that. I’m just going to continue to do what I’m doing’.

And what he’s been doing, much of which has been documented for consumption on social media, is committing himself to his physical fitness. He has significantly bulked up over the course of the past year, something that we have already documented, but he has also retained his speed in doing so.

While caution is warranted, it is difficult not to get quite excited about the prospect of a fully-committed and engaged Martavis Bryant, with a chip on his shoulder, being plopped back into this offense. He has all the ability in the world, and he seems finally ready to harness it.

One thing I would certainly like to see improve from the last time he was on the field is an improvement in his catch rate, or more specifically, his drop rate. I have him marked down for 14 drops in 2015, eight of them coming on passes through less than 10 yards beyond the line of scrimmage.