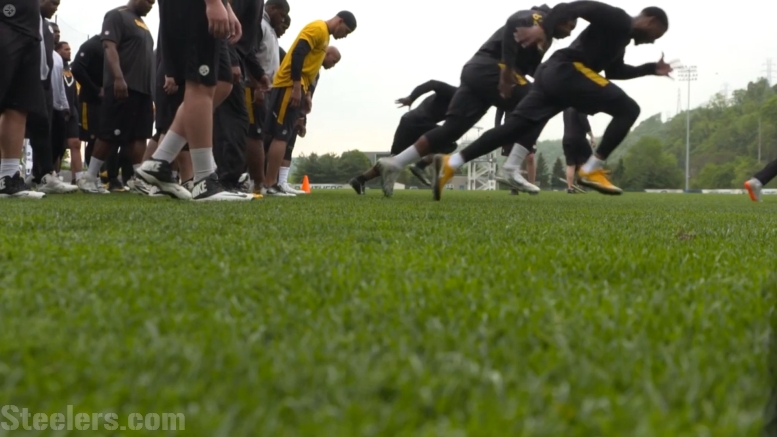 We haven’t even gotten to OTAs yet, which means it’s time for irresponsibly early roster predictions—time to get in as much wrong as early as we possibly can. So here’s my 53-man roster hunches for the Pittsburgh Steelers entering the 2017 season, wherein I lean toward a conservative approach for the most part. Not looking for surprises or things I consider unlikely. The situation will evolve over the course of the summer, but I wanted my choices to reflect the right now, not the maybe in a few months.

Yeah, there are going to be no surprises here. The Steelers already put a stop to that when they released Zach Mettenberger. These are their guys and only an injury would shake things up.

The running back position is less clear—well, one spot, anyway—but while Knile Davis has a poor YPC figure over the course of his career, he is an obvious upgrade on special teams over Fitzgerald Toussaint, which is about all he’ll be asked to do as long as Le’Veon Bell is healthy.

Due simply to depth, the wide receiver position is going to be tough to get right early on. At the moment, I’m finding it difficult to keep Justin Hunter on the roster because it doesn’t seem that he offers any plusses over other players retained and he’s not going to contribute on special teams. Sammie Coates and Darrius Heyward-Bey, the new back-end of the group, will do that.

Lingering doubts at the very least about the long-term prospects of Ladarius Green factor into keeping four tight ends, but the Steelers also continue to be intrigued by Xavier Grimble’s potential as he moves into his third season, and second offseason, with the team. Jesse James is their everyman tight end, while David Johnson is their versatile grinder.

The flexibility of Chris Hubbard makes it an easier decision to stick with eight offensive linemen in favor of adding another player at another position. Brian Mihalik is a good player to have in that he could potentially be rosterable as a ninth lineman, but you also won’t worry too much about him getting picked off the practice squad.

Aside from the quarterback position, I think the defensive line and the offensive line are the two groups most set in stone, and they more or less established that with the addition of Tyson Alualu. Johnny Maxey can get another start on the practice squad.

After the numbers at linebacker in recent years, it feels weird to carry only nine in total this year, but it seems pretty likely to happen. L.J. Fort has been surpassed in terms of special-teams contributions by the other reserves and I’m struggling to find a place for him on the roster.

Here is where I start getting conservative. Seventh-round rookie Keion Adams seems to be the guy that has reasonable potential to flash in the preseason and earn a spot on special teams. But it’s March right now, and for the time being I’m going to lean toward the veterans as the rookie has a steep hill to climb.

The same can be said for the very raw rookie fifth-round cornerback, Brian Allen. It’s very possible that he earns a roster spot, but it’s too early to put that down on paper in May. Senquez Golson’s injury history is a red flag, but we’ll know more about that soon during OTAs. I’m looking forward to getting a better picture of Coty Sensabaugh as well.

This is a solid group of safeties who have all gotten some starts for the team within the last year, with some significant special-teams contributors to boot. Jacob Hagen can push for a roster spot, but right now it seems more likely that another position will offer more value for the 53rd man.

I don’t think there’s really any discussion here. The Steelers don’t even have another kicker on the roster right now and they’re not looking for competition.

Jordan Berry’s tenure as the Steelers’ punter is probably a bit less secure, but he is still more likely than not to retain his job. He did improve last season in his second year, though not as much as I would have liked.

The most interesting roster battle in the league right now is between long-term incumbent long snapper Greg Warren and rookie sixth-round pick Colin Holba. If Holba wins the job, this could reshape the power structure of the AFC for the next decade or more.

Or perhaps we learn that Warren’s body is breaking down.

As you might gather, I’m not thrilled with the current options at certain positions, so when it comes to filling out the running back and safety positions, I think it’s more likely than not that they add players from outside of the 90-man roster. That could be true of the inside linebacker and offensive line positions as well, but more so for the aforementioned.

The Steelers need, or prefer, 10 offensive line bodies for practice purposes, so Mihalik and Ethan Cooper make the most sense. Demarcus Ayers is too good not to try to keep, but with six already on the 53, they probably only retain one wide receiver on the practice squad this year. Of course the rookies, Allen and Adams, both end up here, as do practice squad veterans Maxey and Hagen, with Keith Kelsey at inside linebacker rounding out the group. Akil Blount and his athletic numbers could be more enticing though.