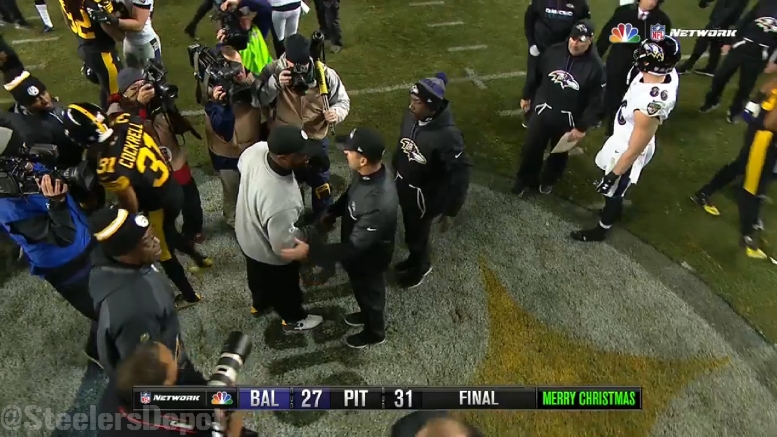 The day after the draft, I posted my thoughts, my initial reaction, to the Pittsburgh Steelers’ draft haul based on my understanding of their needs and wants and what was available to them at the time that they were selecting. I am hoping to be able to provide the same sort of insight for the Steelers’ divisional opponents, perhaps from a bit of a Pittsburgh perspective.

The Ravens defense last season ranked ninth in the league in terms of points per game, just one spot and six total points ahead of the Steelers. They gave up the seventh-fewest total yards, eighth-fewest yards per play, and had the second-best third-down defense.

But they had just 31 sacks, even if they did come up with 18 interceptions and 10 fumble recoveries, five more turnovers than the Steelers had in total, who had 38 sacks, tied for the ninth-most in the league.

So while one could argue that their defense was already strong, they have largely focused on that side of the ball this offseason, adding safety Tony Jefferson and cornerback Brandon Carr in free agency, though they traded defensive end Timmy Jernigan and suffered the retirement of Zachary Orr, while releasing players, most notably Elvis Dumervil.

They used their first four draft picks on the defense, starting with the young, talented cornerback Marlon Humphrey, who will probably not play right away behind Carr, Jimmy Smith, and Tavon Young. In the second and third rounds, they added edge rushers Tyus Bowser and Tim Williams, as well as defensive end Chris Wormley.

Chances are good that Bowser and Williams will get a lot of burn as rookies, because they don’t have much at the edge defender position right now other than the aging (and showing) Terrell Suggs. Michael Pierce will probably log a lot of Jernigan’s lost snaps, but there will certainly be playing time for Wormley.

After losing two offensive linemen, the Ravens used a pair of Day-Three picks on linemen Nico Siragusa and Jermaine Eluemunor, neither of whom seem to be much more than a lateral move from their already mediocre current in-house replacement options, but the latter of whom I have reason to believe is from The Lord of the Rings.

The draft finished up with Chuck Clark, a six-foot safety who will likely fill out the bottom of the depth chart. If the Ravens want to used three safeties, they will more likely than not utilize Lardarius Webb, whom they released and re-signed at a cheaper price.

Looking at the Ravens’ roster, and their draft, however, there seem to be obvious holes in the starting lineup on offense. They wanted a wide receiver but the top three flew off the board in the first round before they could get one. They needed linemen, but they waited until Day Three in a weak class. Bold strategy. Let’s see how it pays off for them.