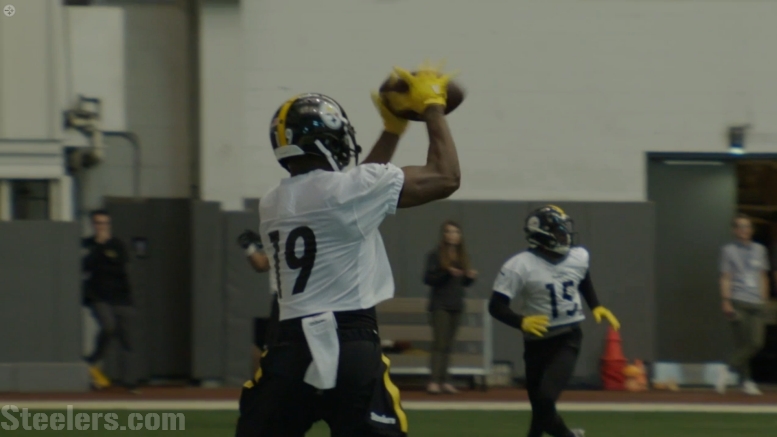 It’s one thing for a young player to excel during rookie minicamp, and it’s entirely another for him to do so during OTAs. Frankly, that is a lesson that Pittsburgh Steelers rookie second-round wide receiver JuJu Smith-Schuster is learning as he finds that he was being graded on a curve previously.

“It’s a lot different”, he said of the transition from rookie minicamp to now working in OTAs with the full 90-man roster—or very close to it. Not that Head Coach Mike Tomlin didn’t try to warn him as he quipped when a reporter asked him about speed during the rookie camp that they hadn’t seen anything yet.

“All of a sudden the tempo’s faster”, Smith-Schuster told Teresa Varley yesterday at the indoor facility at the UPMC Rooney Sports Complex after rain forced the team indoors for the final session of the first week of OTAs. “Everyone’s just a lot faster and everybody’s smarter on the field”.

Still, he also believes that he is coming along, and that he has good teachers to thank for it. “I’m learning a lot just these past few days. I’m learning so much information that help me along the way”, he said. “Coach Mann, he’s also been a great coach. Everything he’s teaching me has been working”.

This week has been the first opportunity for the rookie to get to work with the veteran wide receivers, and he said that he has been taking full advantage of that. When asked what he has been most looking at in studying the experienced player, he said without hesitation that it was watching them release.

“That’s one thing I’ve been watching a lot”, he said of watching Antonio Brown in practice, who was wowing even his veteran teammates such as Martavis Bryant, “is how fast he gets off the ball and his route-running”.

I think it would be fair to characterize the 20-year-old’s early demeanor as nothing short of encouraging, and it raises, at least for me, the expectations of him being an early contributor during his rookie season, no matter where that might come on the field. After all, it’s not as though it’s uncommon for rookie wide receivers to contribute on this team.

Bryant, for example, caught 26 passes for 549 yards and eight touchdowns during his rookie season in 2014. Emmanuel Sanders caught 28 passes for 376 yard and two touchdowns. Mike Wallace caught 39 passes for 756 yards and six touchdowns.

There is nothing, except perhaps the depth chart, that would impede a rookie wide receiver from contributing to this offense. It’s just a matter of putting the work in. And to that end, Smith-Schuster is on point so far. Not that it’s been easy.

“It’s a lot of studying. I feel like I get about four hours to myself a day”, he said, noting that “a majority of the time I’m in the facility working, eating, and just studying plays, watching film”. But that’s the sort of work ethic that it will take for him to climb the depth chart over the summer.