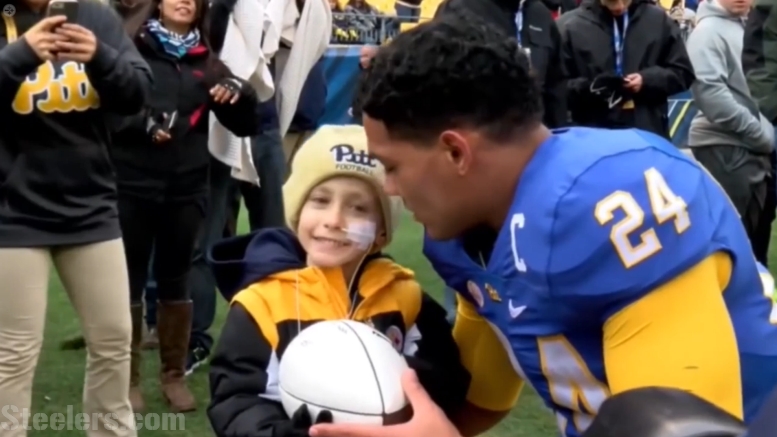 He’s probably not going to like this article, but he knows as well as anybody that it’s a part of his legacy. Since the Pittsburgh Steelers drafted Pittsburgh running back James Conner in the third round of the 2017 NFL Draft, we, and most, have been avoiding the topic and instead have focused on the football aspect.

But we talk about durability issues and off the field issues. We talk about how many games John Ross might play for the Bengals or what sort of volatile situations Joe Mixon might be stepping into in Cincinnati. So why not talk about the other character traits that have gotten these players where they are?

Conner penned an article to the league’s general managers not long before the draft acknowledging that he knows he is perceived as ‘the football player who beat cancer’. He will, to some, always be that, even if he wants to write his own legacy on the field.

He will have time for that. But as he does that, he will also be penning a success story that will continue to serve as an inspiration to others who are going through what he has already gone through himself. And to be fair, it’s not a topic that he is completely unwilling to discuss.

Missi Matthews recently sat down with him to interview him for the team’s website. At one point she asked him, while he has been an inspiration to so many already, who was it who inspired him and kept him going while he was fighting and going through cancer treatments.

“Everybody”, he said. “We play off of each other. Everybody in the world who tells me I’m an inspiration or a motivation for them, I use it right back. So I just continue being that for other people. I always say I play football for people who can’t”.

“I’m just blessed and fortunate to be able to tell my stories and play the game”, he went on, “so it’s easy for me to stay motivated because I know where I’ve been”.

The Steelers may not have drafted Conner out of sentiment, or because it was a ready-made feel-good headline for their offseason, but that doesn’t mean we should just pretend that his achievement of conquering cancer is not going to be a part of his legacy.

Everything that he accomplishes on the field will be a testament to the will required to overcome adversity, and is a fitting source of inspiration for those who find themselves in like circumstances. It’s hard to imagine while you’re in the midst of all sorts of treatments that somebody who once was in the same shoes as you was able to go on and become a professional athlete.

There’s plenty of time to talk about what he’s going to do on the field, and we’ve already weighed in quite a bit on what he did during his college career—and even touched on how his battle with cancer shaped his on-field performance—but I thought it would be an injustice to let it go on much longer without making this important point, which transcends sports, and which touches the lives of virtually everybody. I for one can’t think of anybody who hasn’t been affected by cancer in some way.