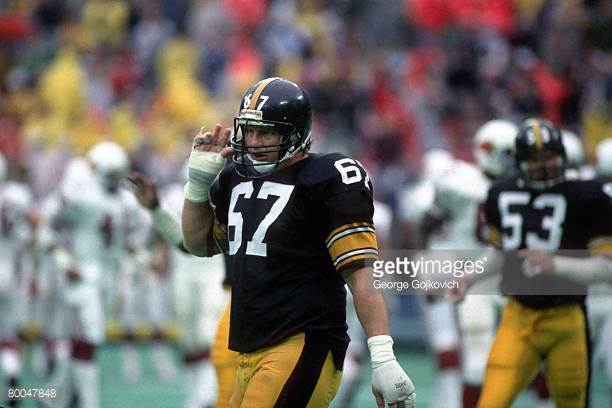 We posed a question similar to this a year ago. But that was just regarding the current roster. I want to take it one step further. Who are the most underrated in Pittsburgh Steelers’ history?

I decided to write about this after reading Mike Tanier’s list of the 25 most underrated players of all-time. It’s a good read so check it out (after you answer the title’s question).

You can take this two ways. The most underrated by the franchise’s own fan base or by the national media rating a Steeler. Let me throw a couple options of each but definitely let me know your input below. Lots of names we could consider.

Lynn Chandnois – Arguably the most underrated and overlooked. A forgotten name of the pre Chuck Noll era, a common threat on this internal list. He played just seven seasons for the Steelers and only 13 total his last two years. Still, he went to a pair of Pro Bowls and is the best returner in franchise history.

He is third all-time in NFL history in kick return average, 29.6 yards. That trails only Gale Sayers and Cordarrelle Patterson. Chandnois’ best season came in 1952, returning two kicks on just 17 tries, leading the league and earning one of his Pro Bowl berths. He was a do-it-all player, a running back who ran for 16 touchdowns and caught 162 total passes. Arguably the best player on bad teams, never did they surpass the .500 mark when he was there, defenses still struggled to stop him.

His career would’ve been even better had Buddy Parker not cut him in a fit of rage. Buddy Parker. Definitely not underrated.

Bill Dudley – This one is understandable because of how long ago he played. A first round pick out of Virginia, he played three seasons with the team, broken up by serving in World War II. In two of his three years, he led the league in rushing and once, he did so in punt return average. Like Chandnois, he did it all as their unquestioned best player. Punted, kicked field goals, caught and threw the ball. He spent the majority of his career elsewhere but never had the success he did in Pittsburgh.

I think Steelers’ fans are sorta aware of him but most couldn’t tell you a thing about his football career. It’s time for a reminder.

Marvel Smith – Someone a little more recent. The Steelers don’t have a fruitful history of renowned offensive tackles and Smith might’ve been that guy if it wasn’t for health. Unfortunately, that made him easy to forget about and his back injuries is what’s commonly associated with him. Still, he started 108 games and made a Pro Bowl in 2004.

Mike Wagner – The Steelers’ defense of the 70s is littered with household names: Jack Lambert, Mel Blount, and Joe Greene. That shoves Wagner’s name into the back of people’s minds, even Steelers’ fans. He was with the team for all four, starting three, and made some of his biggest players in the postseason. In 11 playoff games from 1974 to 1978, he picked off five passes. Two of those came in Super Bowls while two more came in the AFC Championship in 1976 vs rival Oakland.

Ramon Foster – Maybe I’m wrong but I think Foster’s career would be summed up by most fans as “fine.” And it’s more than that, to me, at least. Foster has enjoyed a really strong career. Consistently excellent and so far, he hasn’t shown any drop off in play. 101 starts and still going strong. I know he’s not top-tier but man, Foster is a guy you don’t want to forget about in 20 years. But sadly, probably will.

Gary Dunn – When you think of Steelers’ nose tackles, Casey Hampton is the first to come to mind. But Dunn was Hampton before Hampton, the first nose tackle as the team transitioned from their 4-3 of the 70s to a 3-4 of the 80s. He had 18 career sacks, including six in the 1982 and 1983 seasons.

Per Pro Football Reference, his career arc is similar to William Perry, a name most football fans know. I doubt half the Steelers’ fan population even knows/remembers Dunn existed.

Donnie Shell – This one is obvious. Shell is one of the most criminally underrated by the national media, right up there with L.C. Greenwood, and someone who should be in the Hall. You don’t need me to make the case for you; you already know. Five Pro Bowls, three-time All-Pro, who finished his career with 51 interceptions. For six straight seasons, he picked off at least five passes.

Someone please get this man in Canton.

Aaron Smith – Steelers’ fans know how important he was to the franchise. An old-school run-stuffer who left the game right before it was populated by supreme athletes, he started 152 games and racked up 44 sacks. From 2000 to 2006, he didn’t miss. Remarkably consistent. Consistently remarkable.

But because he was a run stopper first, most in the national media didn’t care about him at the time. The passage of time hasn’t helped.

Andy Russell – Fire up any documentary on the Steelers’ dynasty and soon enough, it’ll make its way to the Steelers’ linebackers. They’ll discuss Jack Lambert and Jack Ham but not poor Andy Russell. To be fair, Russell wasn’t as good as either of them but he was still rock solid.

Seven time Pro Bowler. Two time World Champion. 18 career interceptions. Think of it this way: he was one of the few people Chuck Noll deemed good enough to keep as he handed out pink slips like candy to the original roster he inherited. A compliment of the highest order.