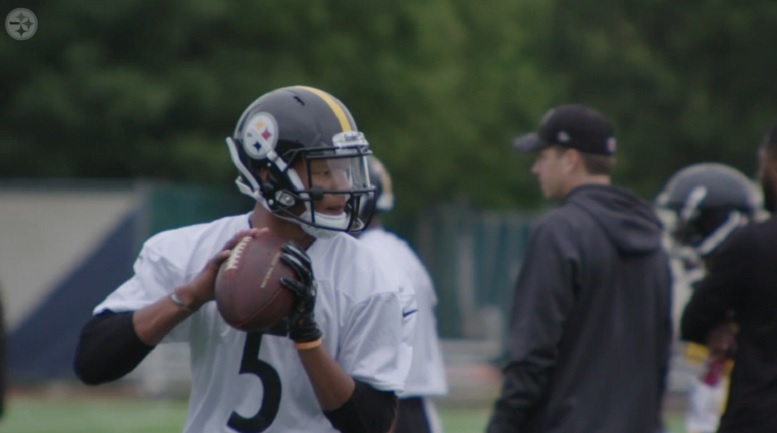 New Pittsburgh Steelers quarterback Joshua Dobbs just had quite an eventful 24-hour period as the team’s fourth-round draft pick graduated from Tennessee on Thursday and was on the field Friday for the start of the annual rookie minicamp. Even though Dobbs presumably got into Pittsburgh very late Thursday night, or early Friday morning, he didn’t appear to be tired at all.

“Of course, of course,” Dobbs said when asked if he was able to get any sleep after making the trek from Tennessee to Pittsburgh. “I got some sleep when we got in. Just enough and was able to come in ready to go today.”

During the pre-draft process, you probably heard Dobbs being compared to Dallas Cowboys quarterback Dak Prescott, who wound up being their starter during his rookie season due to an injury to then-incumbent Tony Romo. On Friday, Dobbs was asked what he thinks about those comparisons to Prescott and especially after the first NFL season the Mississippi State product had that included him leading his team to the Divisional Round of the playoffs.

Dobbs did talk, however, about being recruited by Mississippi State prior to deciding to commit to Tennessee.

“I was, I was recruited by Mississippi State,” Dobbs said. “He [Prescott] was two years ahead of me. So, I was on a recruiting visit and he was there. So, it was cool though to cross his paths.”

Dobbs transition to the NFL game figures to be fun to watch happen and he was asked Friday if he believes he’ll need to make many adjustments to the way he plays.

“Well, of course there’s always differences when you go from one person’s offense to another, but it’s a similar scheme, similar terminology,” Dobbs said. “So, there’s always going to be some adjustments, always going to be some improvements that you’re trying to make as you move forward, but you know there’s always similarities in the game just because it is football. There are similarities, but a lot of things that you have to adjust to. So, we’ll just take it one day at a time and keep it in stride.”

During a recent interview with Missi Matthews of steelers.com, Steelers offensive coordinator Todd Haley was asked what he planned on telling Dobbs when it comes to what his role with the team will be and what he’ll expect out of him as a player once he arrives in Pittsburgh as a rookie quarterback.

“That’s all been spelled out, even beforehand, I think,” Haley said. “But he’s going to come in on the ground floor, so to speak, and he’s a smart enough guy that he understands that he’s got to just be grinding day in and day out. And there aren’t going to be a ton of reps early on, I mean that’s just the nature of the position.

“There can only be so many, but a young guy like that has to be learning on a daily basis, watching sometimes. They’re not physical reps, they’re mental reps and then when you do get opportunities to get out there and actually have some physical reps, you’ve got to take advantage of them.”

While Dobbs’ reps will likely dwindle quite a bit once the OTA sessions and training camp get underway, this weekend he’s sure to get plenty of them.

“You’re always processing information and so of course it was the first day of install, a little more install later,” Dobbs said Friday when asked if he was able to “wing-it some” during his first official practice with the Steelers without thinking. “So, you’re just growing, trying to come out and rep and be successful in what you’re learning upstairs. And then you want to build on each practice and continue to improve moving forward. It was a good day and I’ll look to improve in our next session today.”

It's not rocket science but Josh Dobbs takes a few snaps pic.twitter.com/LanegKH5tF