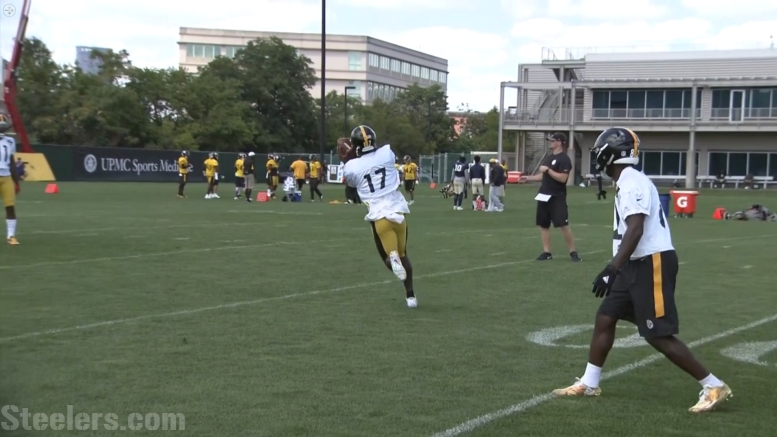 Topic: Will Eli Rogers hold on to his job as the starting slot receiver to start the season, and to finish the season?

Now that it quickly appears to be on the path to being settled that Martavis Bryant is going to assume his starting position in the offense—and since the Ladarius Green question as already been answered—it would seem to me that the biggest question remaining on the offensive side of the ball is how long Eli Rogers can hold on to his job in the slot.

This is a role that the third-year wide receiver held throughout his first healthy season with the team a year ago, whenever he was not sidelined with an injury or being benched for disciplinary reasons. But that was also a year in which Bryant was suspended and Markus Wheaton was near-perpetually out of the lineup, while Sammie Coates’ contributions essentially ended after five games.

This year, Bryant is back, Coates is hungry to establish a role for himself that would allow him to pick up where he left off after the first five games, and we are waiting to see how fast JuJu Smith-Schuster, the rookie second-round pick, can get on the field.

I don’t know that the smart money, frankly, can favor either side right now, but the easy case for Rogers is the fact that he’s already been there and done it. He’s been praised for his ability to gain separation out of the slot since he came in as an undrafted free agent, and they kept him on injured reserve because of how much they believed in him.

But while he certainly didn’t do anything to lose his starting role, the fact of the matter is that players like Coates and Smith-Schuster can bring elements to the position that he cannot, namely the vertical ability of the former and the size, blocking ability, and willpower in contested catch situations of the latter.

At the end of the day, I think it’s pretty likely that by midseason, we might not see a ‘starting’ slot receiver, but rather that we will see a heavy rotation there depending on the game circumstances.