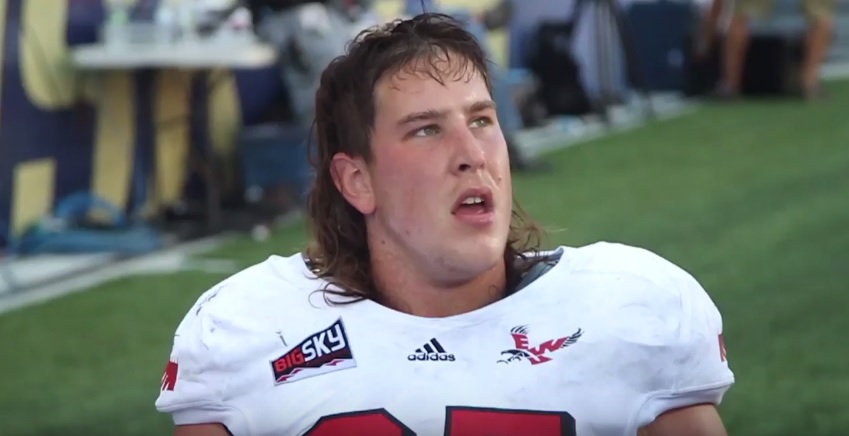 Next up is the newly signed offensive tackle Jake Rodgers.

I thought this series was over until next winter until the team went out and signed Rodgers Friday afternoon. Unlike many, he isn’t a first year player or UDFA. Drafted by the New York Giants in the seventh round of the 2015 draft, he has a little more clout than the typical player we future, though to date, no real measure of NFL success.

In high school, Rodgers served as your classic big man on campus. A three star athlete, he played baseball, lettered in basketball three times and did it all on the gridiron: a tight end, defensive end, kicker, and punter. Scout.com tabbed him as a three star prospect and committed to Washington State for the 2010 season. He redshirted his freshmen season but got on the field, starting in I believe 2012 – the timeline isn’t completely clear –  and playing everywhere.

Five starts at right tackle. Three on the left. Three more at right guard, a final one on the right, and a partridge in a pear tree.

He transferred to FCS’ Eastern Washington for the 2013 season for reasons I couldn’t completely unearth. Maybe something related to an injury in spring practice and a battle for a starting job he may not have won because of it. A knee injury caused him to have a bumpy initial season there, starting four games in all.

He started 2014 predominately at right tackle though with his versatile background, saw action on the left side, too. Sadly, in December of 2014, his father – John, in attendance to watch his son play – collapsed and had to be rushed to the hospital in an ambulance. He did two weeks later and clearly, was one of the biggest moments of adversity his son and his family ever faced.

Jake talked about how tough it was, but also the strong family support he found comfort in, during an interview with NFL Draft Diamonds two years ago. He said his dad would be prepared that he continued his dream of playing in the NFL.

“I’ve been lucky to have a great family and group of friends and people who care about me. It’s also what I know he would have wanted me to do and he would be very proud of me and that helps a lot.”

The Atlanta Falcons gave him such an opportunity, taking him in the 7th round of the 2015 draft. The NFL Network crew had this to say after the pick.

“I like Jake Rodgers. I think this guy is a late rounder who absolutely can make a team…he’s got quick feet, he’s got good feet. He can get out there and get into space and move,” Lance Zierlein said, who mentioned his father – a former offensive line coach for the Steelers – had a similar high opinion of.

Unfortunately, the Falcons opted against keeping him on the practice squad. It took until December for him to latch on with his next squad, signing with the New York Giants to their practice squad and staying there until the following September when he was waived/injured. Again, he had to play the waiting game, getting healthy and waiting on a call, The Carolina Panthers signed him in November of last year and carried him until May 2nd, giving him the pink slip to make room for their UDFAs.

Clearly, Pittsburgh had a positive evaluation on him at some point, immediately signing him. Given the strength and depth along the offensive line, the team didn’t bother drafting one and only signed one as a UDFA, guard Ethan Cooper. That could open the door for a practice squad spot but we’ll have to see exactly where the team wants him to play, a move inside to guard could happen, and of course, the strength of his own play. But he’s seemingly an impressive athlete and might still be rocking the awesome mullet you see in the header photo. He’ll be fun to watch.