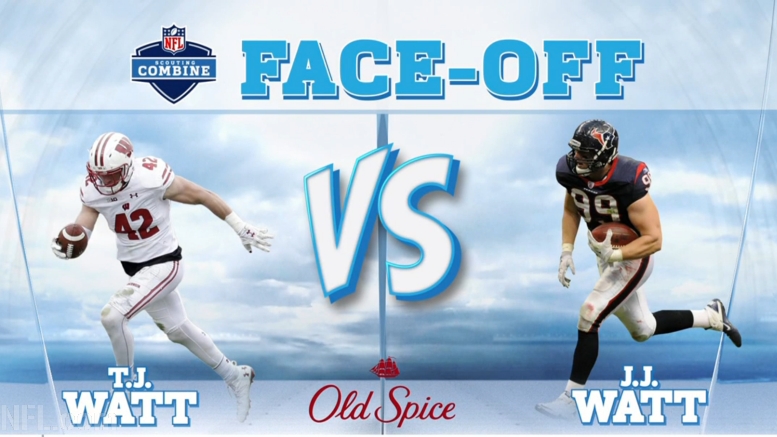 You should probably begin to prepare yourselves for it now, because you’re definitely going to be hearing it pretty soon, and then again in late December. The Pittsburgh Steelers drafted outside linebacker T.J. Watt, the young brother of Houston Texans defensive end J.J. Watt. The Texans will host the Steelers on Christmas Day.

The (obvious) headlines will write themselves. ‘I’m Dreaming Of A Watt Christmas’. There, I said it. I got it out of the way and out of my system. I apologize. But at least I didn’t say anything about the Harbowl between the Ravens and 49ers four years ago.

But, okay, there really is a storyline here. Watt is a generational talent who became the first player ever to win the Defensive Player of the Year Award three times in a row. That’s just a ridiculous and unprecedented feat, and all three of them were warranted.

T.J. has the same blood line, and, really, he has the athletic ability to back up the genetic component. As we have shown in recent days, he met with all of the trait trends that the Steelers have gone for in recent years according to Alex Kozora’s study. He is a rare specimen in his own right.

And we are talking about a game late in the season. By that point it’s pretty realistic that we can expect Watt to have carved out a role for himself, at least in a rotation, for the Steelers’ defense, so he is going to be on the field, I think. He will be on special teams anyway.

And J.J., provided that he is recovered from his back injury, will be there as well, and that will certainly be a fun little test for this offensive line. Perhaps T.J. will give tackles fits the way his older brother does some day.

Interestingly enough, the two have never played against each other outside of the backyard before, so to do so this year will be a first for them, as well as a special treat. Some may want to trivialize bloodlines in the NFL, but they do help.

J.J even said at some point during this offseason that he believes his younger brother is more advanced at this stage than he was went he came out, even though he was a top-10 pick. Mike Tomlin was asked about T.J.’s seemingly quiet nature, but he said that J.J. was a similar was when they interviewed him out of Wisconsin several years ago, and that he became the person he is now over the years.

That is a story of a prospect reaching his potential, and that is a story that the Steelers are hoping to see duplicated in T.J. And you can bet that he will have the help of his older brother on his journey, which is no insignificant resource.

There may be some mixed opinions about the type of personality that J.J. Watt has—I personally have no problem with him—but his passion, effort, and work ethic cannot be denied. On those points, his younger brother appears to be a clone. Let’s hope Houston can contain both of them in one stadium this Christmas.