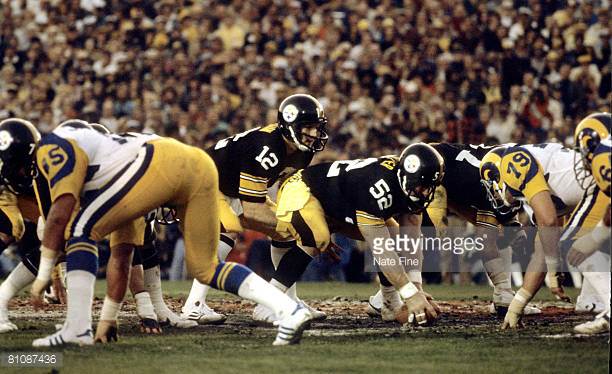 Although the fourth round of the draft still allows for some river boat gambling by NFL front offices it’s the beginning of the talent level where players are expected to at least provide quality depth to team rosters.

The Pittsburgh Steelers have excelled in the top rounds of the draft and their relative success in the fourth slot through the years has helped them build championship-grade squads.

When you factor in elements like talent limitations, injury and…yes…suspension, you could place much of this group in the “close but no cigar” category.

But that doesn’t mean the Steelers haven’t drafted some genuine Cohibas in the fourth round.

Many young fans like myself (at the time) would claim Lynn Swann as their favorite receiver during the roaring 1970’s. But years later as our tastes matured (and we started enjoying coffee and Brussel sprouts) we would be hard pressed not to admit Hall of Famer John Stallworth was the superior player of the two when considering their full careers.

Although “Swanny” was spectacular and balletic, Stallworth steadily made many of the big plays including under the Super Bowl spotlights. All comparisons aside, many consider the two to be the top receiving duo in NFL history. Stallworth played for 14 productive seasons with the Steelers with 537 receptions (the team record until Hines Ward bested it in 2005), 8,723 yards and 63 TD’s. Stallworth was tall with excellent speed and leaping ability which allowed him to often rise above the crowd to claim the ball. A Calvin Johnson type of player Stallworth was highly valued by his coaches and teammates and was voted the team’s MVP twice.

The player known as “Mad Dog” because of his unrelenting drive to get to the quarterback was once described by Dan Rooney as “one of the greatest players to ever wear a Steelers uniform”. Technically, he gathered 46 sacks (this wasn’t an official statistic back then) but his most famous one came in Super Bowl IX when he bottled up elusive Minnesota quarterback Fran Tarkenton for a safety, the only points scored in the first half of the game the Steelers would eventually win 16-6.

The most surprising thing about his play during this game was that he was hospitalized before and after the game for pneumonia but played anyway. White was one of the famous four of the Steel Curtain defensive line.

Outside of Pittsburgh few fans know about Aaron Smith, but many of the Steelers defensive coaches considered him the most valuable player on the squad. Smith, a lanky man with unique athleticism and strength took a couple of years to master the 3-4 end position but once he did, many considered him among the best to have ever played the role. Unselfish and willing to do the dirty work while the Steelers linebackers got the limelight Smith almost always was double-teamed against the pass but still managed to gather 44 sacks during his tenure. During his prime, the left side of the defensive line was almost always impossible for teams to penetrate and many of them just stopped trying.

A truly great Steeler in both play and blue-collar character.

The question that will always tease and tantalize Pittsburgh Steelers fans and coaches alike: How good could Ike Taylor have been if he could only catch? Unfortunately, Taylor’s bad case of the dropsies has always hindered his Pro Bowl participation, but his size, thoroughbred speed (once clocked at 4.3), incredible fitness ethic and competitive drive still made him one of the best shutdown corners in the league during his best years.

A self-claimed, tongue-in-cheek graduate of “Swaggin University” Taylor was a key pillar of the great Steelers defenses of their more recent Super Bowl runs and remains among the favorites in the locker room with teammates and the media.

At one point in his quietly impressive career Deshea Townsend was considered the top slot defender in the league and was a vital (albeit unheralded) cog in Coach Dick LeBeau’s league-leading defenses. Much like Aaron Smith, Townsend was always willing to take on whatever duties would best benefit the team and was as reliable and steady as they came. Even though he played in spot duties and various positions he managed to get 21 interceptions for the Steelers (seven more than Ike Taylor).

Earl Holmes (1996) A steady force against the run, Holmes had some chops as a blitzer from the inside linebacker position.

Kevin Henry (1993) A 3-4 defensive end who played with some Aaron Smith similarities in that he was a disruptive pass rusher.

Willie Colon (2006) Once regarded as one of the most promising right tackles in the league Colon’s career was plagued by injuries during his stint with the Steelers.

Larry Foote (2002) A very consistent player at inside linebacker who proved to be a good value at the fourth round.

Ninth Round+
Eighth Round
Seventh Round
Sixth Round