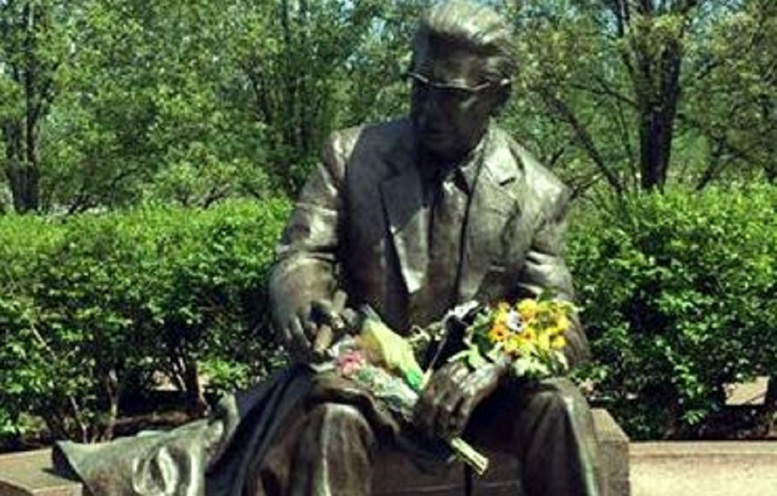 Yesterday, I made a last-minute decision and drove 200 miles up to Pittsburgh to pay my respects. Very glad to have done that. The Heinz Field staff was very nice and escorted visitors to the viewing of Dan Rooney’s closed casket with a line extending through the Great Hall. Art Rooney II was there to greet every one of several thousand visitors who came to say farewell. A line of Rooney family member formed a line to thank everyone.

The Champion’s Club was draped in black with some faint music playing in the background – I think it was “Danny Boy”. A very fine portrait of Dan with the American flag. It must have been his official photograph as Ambassador to Ireland. Near his casket were several flags including the Stars & Stripes, Ireland’s and the city of Pittsburgh’s. You could see the sadness in Art’s eyes but still very engaging. My words to him though of little comfort were, “The Chief has his son with him now.” It was the only thing I could think to say.

Some people were openly crying; others just had a somber stare. But the Rooney progeny brought a smile to more than a few. Graciously introducing themselves and comforting the comforters at times. Several Pittsburgh Steelers were there. I saw Andy Russell, Lynn Swann, Matt Bahr and others. Everyone behaved in their presence. No one was going to jag around. Once outside, it was a brilliant sunny day. Many people stopping by the statue of Art Rooney with several bouquets placed in his lap. My visit was all of twenty minutes but it felt good to have paid my respects. I hopped in my car and drove straight back to Washington DC. A lot of you did not have the opportunity to make the visit so just thought to share what I experienced with you.

Draft day is fast approaching; the preseason schedule published; before we know it OTA’s and then another training camp will have us fully back in gear for 2017 season. The Pittsburgh Pirates have started their season. The Pittsburgh Penguins are on the verge of getting through the first round against the Columbus Blue Jackets. Pitt basketball fizzled failing to make the NCAA or NIT tournaments. But Penn State wrestling crowned 5 individual champions to win their 6th NCAA championship in seven years. These distractions have served Steeler fans well in the lull.

I’ll finish this with some music from BlackMahal, that recorded Black, Gold & Silver (Lombardi Baby) just before the 2010 Super Bowl. A Punjabi band that also is a fan of the Steelers – how many NFL teams have a Punjabi band making music about their team? Anyway; they have a recording of Dan Rooney being asked if there was enough room in the trophy case for another Lombardi. Dan’s answer; “We’ll make room!”