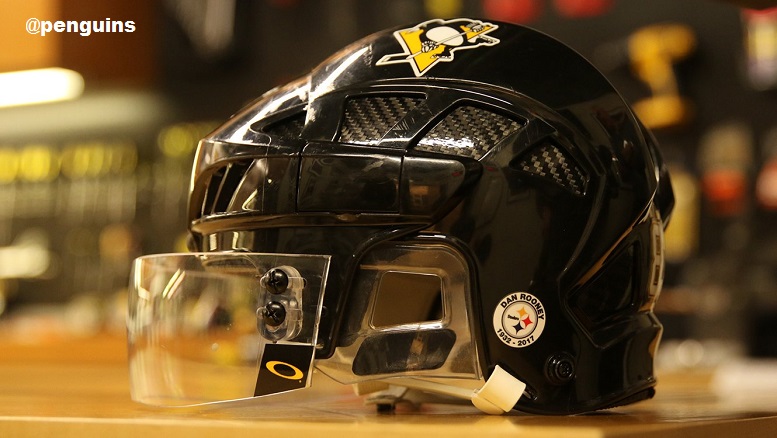 The Pittsburgh Penguins announced a few hours ago that they will honor Dan Rooney, chairman of the Pittsburgh Steelers who passed away this week, by wearing a decal on their helmets in their Friday night playoff game against the Columbus Blue Jackets.

As you can see below, the helmet decal includes Rooney’s full name in addition to the Steelers logo along with his birth and death years.
Penguins president/CEO David Morehouse and team owner Mario Lemieux both issued statements on Rooney’s passing on Thursday.

“Dan Rooney exemplified the very best of Pittsburgh. He was classy, courteous, dedicated, honest, hard-working – and, most of all, he never forgot where he came from. He and his beloved Pittsburgh Steelers set the standard for operating a first-class professional sports franchise – both on and off the field – and his generous contributions to our community will never be forgotten. From a personal standpoint, I was honored to call him a friend and always appreciated his unwavering support of the Penguins. We send our deepest condolences to his wife, Patricia, and the entire Rooney family. Mr. Rooney was a champion and a true Pittsburgh icon. He will be missed.”

“Mr. Rooney was an amazing man who made such tremendous contributions to the NFL, the City of Pittsburgh and the people of our community. I feel very fortunate to have known him. He impacted many of our lives, and he left a legacy that makes us all proud to be Pittsburghers.”