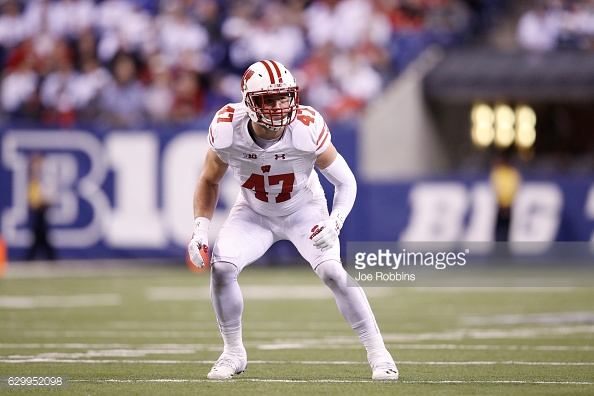 If you’re into seven round mock drafts, stop drilling, you’ve hit oil. Our buddy RJ White over at CBS Sports conducted a massive seven round mock, complete with trades, a mighty endeavor indeed. Obviously, we’ll focus on what haul the Pittsburgh Steelers brought in.

With the 30th overall pick, White has the team taking TE David Njoku from Miami. Here’s his justification for passing up a defensive player.

“Here it’s with Njoku, a freakish talent at tight end who steps right in as the third option in the passing game behind Antonio Brown and Le’Veon Bell. There will be plenty of talent available over the next few rounds to help the defense, but there aren’t many tights on Earth with the athletic ability of Njoku.”

Tight end talk sure has quieted down from when we started this thing, going from an early round possibility to maybe not taking one at all. The Steelers haven’t shown much interest in tight ends during the pre-draft process, though to be fair, we’re not expecting a national guy like White to know that. But it’s still unlikely a tight end is the pick early on.

He goes with a popular pick in the second, snagging OLB Derek Rivers. Despite being from the FCS level, the Steelers have shown a quite a bit of interest in him, sending Joey Porter to his Pro Day and bringing Rivers in for an official pre-draft visit. Some think Rivers will be there a round later. We’ll see how it plays out.

Another popular Steelers’ mock in the third, going with CB Rasul Douglas. Carnell Lake was at his Pro Day and again, another pre-draft visitor. Long speed is a question and he’s stiff but he has a baseline profile that’ll be attractive to Pittsburgh. Tall, long, with great ball skills, picking off eight passes in his only year as a starter with WVU.

Vince Biegel is listed as an inside linebacker for the team’s other third round selection. White writes he’s a “limited talent who needs coaching up but has all the intangibles you could want from an over-achiever,” which isn’t the best endorsement but an apt one. He mostly played on the EDGE in college but the idea of kicking him inside makes enough sense.

For the first time since Deshea Townsend, the Steelers take an Alabama player, selecting safety Eddie Jackson in the 4th round. He’s coming off a broken leg that he now claims to be fully recovered from. Jackson hasn’t been getting much publicity this draft season, partly due to injury, and partly due to the talent he played with in college. Before going down last year, he finished 2016 with 24 tackles, 2.5 for a loss, and an interception.

One of those wacky trades pops up in the 5th, with the team apparently trading their 5th and a 7th to move up to take WR Josh Reynolds. The pick makes sense on paper, though I still contend it’s a little low for where Reynolds will end up, but he fits the bill as an athletic, big-play Z receiver this team covets.

With just one pick left, White has the team taking offensive linemen JJ Dielman. Dielman, from Utah, could be considered a swing player, who started 2014 and 2015 at right tackle before moving to center his senior year. A senior year that was unfortunately cut short after five games due to a leg injury. Linemen is low on the totem poll of needs but then again, it is a 6th round pick, so to get angry would be pedantic.

Lot of work went into this and you can certainly appreciate the time and effort so be sure to check his mock out, which I’ll again link right here. If you enjoy these, I’ll be posting my 5th annual seventh round mock next Wednesday.

I’ll recap all the picks here too.