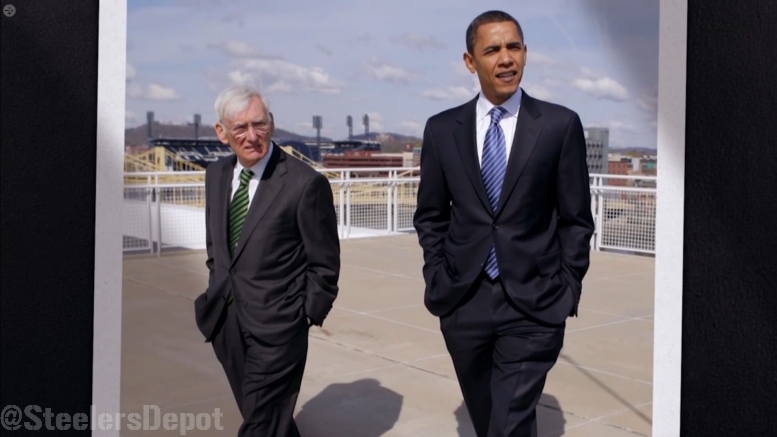 Correct me if I’m wrong, but I don’t believe that Pittsburgh Steelers President and Chairman Dan Rooney necessarily considered himself to be an overly political person. Yet while he considered himself a Republican, he found himself stirred by the speech that then-candidate Barack Obama gave following his victory in the Iowa caucus in early 2008.

Dan Majors wrote last week that he told his son, Jim, that it was “the greatest speech I’ve seen since John Kennedy”. Rooney ultimately got himself involved with Obama’s campaign and helped him to get elected, introducing him at an event at the Civic Center.

After Obama entered office, he appointed Rooney to the fitting ambassadorship to Ireland, though he later said that they were also considering him for the ambassadorship to the Vatican. Either would have been applicable, as he was also a devout Catholic.

Upon adding Ambassador to his title, Obama at the time said of Rooney, “I am honored and grateful that such a dedicated and accomplished individual has agreed to serve as the representative of the United States to the Irish people. Dan Rooney is an unwavering supporter of Irish peace, culture, and education, and I have every confidence that he…will ensure America’s continued close and unique partnership with Ireland in the years ahead”.

Rooney served in that post with distinction, playing an integral role in growing the Ireland Funds. He also became the first US ambassador to Ireland who visited every county in the Republic. The president of Ireland, Michael Higgins, paid his respects to the man he worked with from 2011 to 2012, noting the role that he played in that time.

Obama, too, naturally paid his respects to his ambassador. He said in a statement that “Dan Rooney was a great friend of mine, but more importantly, he was a great friend to the people of Pittsburgh, a model citizen, and someone who represented the United States with dignity and grace on the world stage”.

He continued, echoing in his original statement eight years ago that, “I knew he’d do a wonderful job”, but said, “naturally, he surpassed my high expectations, and I know the people of Ireland think fondly of him today”.

The former president concluded by offering his “condolences to the Rooney family, some of the most gracious and thoughtful people we know—even as we celebrate the life of Dan Rooney: a championship-caliber good man”.

While Obama and his wife have been living it up recently, cruising near the waters of Tahiti on a luxurious lot with other celebrities, the 44th president is in Pittsburgh today to honor his former ambassador at his funeral. That he would seemingly cut his vacation short in order to be on hand to honor the life of one of his many ambassadors during his first term in office, I think, says something about Rooney’s impact, both personally and professionally, on both the world stage and on those who play on that stage.