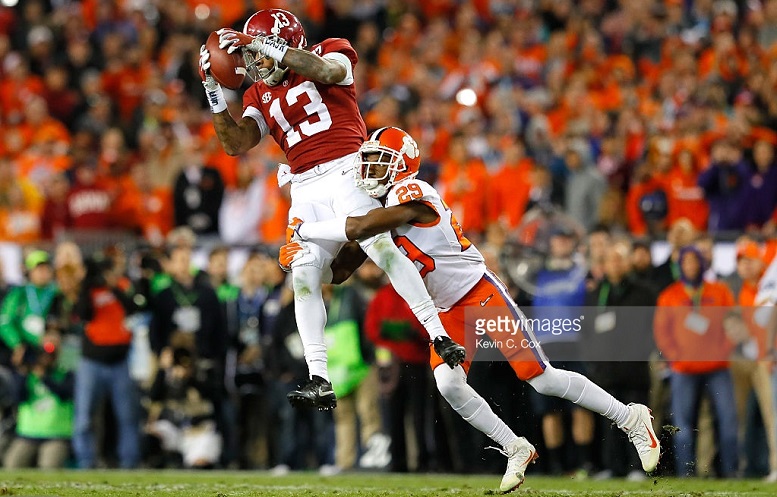 – Already 23 years old, will turn 24 in December
– More quick than fast, will not outrun many NFL defensive backs
– Sometimes gets carried away blocking, getting overly aggressive
– Limited route tree, but perhaps more by team design and QB situation
– Has a bad tendency to run east and west, instead of north and south to gain yardage
– 11 drops in the last 2 years and has some issues with contested throws

– Consensus 4 star recruit
– Birmingham Player of the Year in high school
– Finished his high school career scoring 138 touchdowns as a QB and S
– Red-shirted his 2013 freshman season
– Finished his college career with 33 games played, 129 receptions for 1713 yards (13.3 yard average) and 12 touchdowns, 13 rushes for 82 yards (6.3 yard average), along with 10 kickoff returns for 191 yards (19.1 yard average) and went 2 for 2 on passing attempts for 36 yards (18 yard average)
– Didn’t play in 3 games his redshirt junior year: 2 due to a left knee injury and 1 due to a violation of team rules per HC Saban
– Being a father of 2 children helped make him decide to declare early

Lined up wide right, the receiver gets a free release off the line at the snap. He hand fights with the corner, getting pushed out of bounds, but continues to track the ball without breaking concentration. Stewart adjusts his route to catch the ball in the end zone while the corner and safety look on.

The split end gets sent in motion and handed the ball on a nicely developed jet sweep where he out quicks the DE to the corner. #13 reads his blocks, finds a seam, and explodes into the open field. The former Crimson Tide member started running out of real estate and got tripped up after a nice rushing gain!

Split out on the right, the receiver comes out and attacks the middle of the field. He then comes back to block for his RB that catches a pass in the flats. Stewart takes the defender out with a block using his shoulder pad across the DBs thigh pad to spring #34 on his way to the end zone. #13 adds so much to a running game.

The receiver, split out on the right, gets a free release then runs a quick curl. Stewart catches the ball and protects himself while falling forward for an 11-yard gain. This shows his willingness to attack the pigskin and take the big hit as well fighting for additional yardage.

This is a hard nosed receiver who doesn’t mind mixing it up as blocker or catching the ball. He can make defenders miss in space and will occasionally get behind the defense. His speed doesn’t threaten anyone, but can make a lot of contested catches. The former high school quarterback needs to improve his route running, and decrease his number of drops. I see Stewart as a lesser Hines Ward which could help the Steelers out both in the run and passing games. The problem is that Stewart might go too early for the athlete that he is in the 2nd round, but would be a steal in the 4th.

Games Watched: vs. USC, Vs. Mississippi State, vs. Auburn