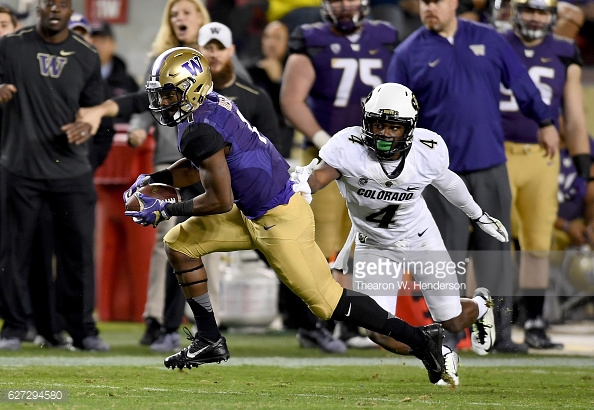 We’ve kept close tabs on Fox Sports Dieter Kurtenbach’s mock drafts throughout this offseason and to his credit, they’ve gotten progressively better. I’m apparently serving as his ombudsman for these things. Kurtenbach has been rolling out more mock drafts than even I have and he updated his latest one earlier this week, hitting us with another four round edition.

This one is pretty respectable too, starting off with the Pittsburgh Steelers taking CB Chidobe Awuzie in the first round. If you know me, you know Awuzie is a personal favorite of mine. Here’s Kurtenbach’s justification

“Big Ben might be pining for more offensive weapons, but the Steelers need someone to start as a slot cornerback next year, and Awuzie has prototypical cornerback size but also the quickness to play against opponents’ fastest receivers. Add in his ability to help in the pass rush (eight sacks, six hits and 17 hurries, per Pro Football Focus) and you have that slot corner.”

He certainly looks good on paper so it’s hard to fault Kurtenbach for the notion. Awuzie is capable of playing on the outside or in the slot, giving the team some flexibility for his future. Unfortunately, the tea leaves aren’t telling us he’s coming to Pittsburgh with the team showing very little interest in him throughout the pre-draft process. There’s still a chance he won’t even be on the board, getting an invite to the draft which often means a Day One pick. Dallas at 28 is one team to watch.

The Steelers stay on the defensive side of the ball in round two, taking Alabama OLB Tim Williams. Pittsburgh certainly has done their homework on Williams, bringing him in for a visit, working him out privately, and attending Alabama’s Pro Day. Off the field concerns are holding him back.

Pittsburgh goes offense with their two third round picks. Wide receiver Chris Godwin at 94 and running back Tarik Cohen at 105. Godwin certainly makes a great deal of sense though I’m not convinced he’s going to last that long after a fantastic workout. Cohen is much more disagreeable, a scat back who put up huge numbers at North Carolina A&T but the obvious comparisons to Dri Archer will give many fans heartburn.

That comparison isn’t totally fair to Cohen and his game has serious talent. But his slight build isn’t what the Steelers are looking for and the pick doesn’t make much sense.

Finally, in the fourth, the Steelers double-dip at outside linebacker, selecting Illinois’ Carroll Phillips. It makes sense given the need and their interest though, as I wrote in my recent scouting report on him, I am far from a fan.

Again, check out his entire mock draft at the link here.