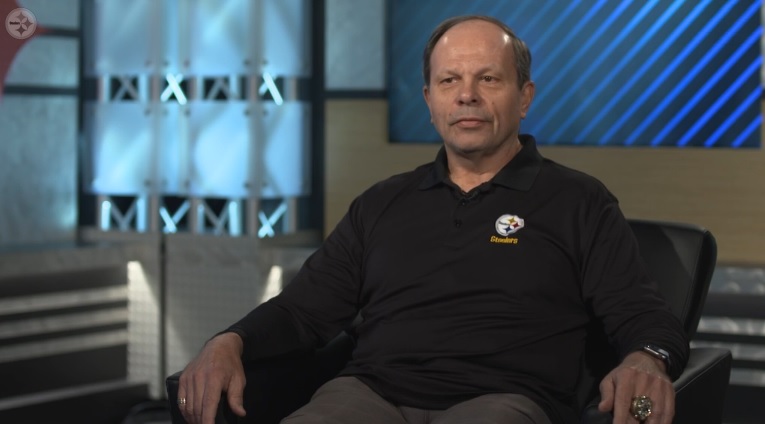 I love quirky interviews. The guys you rarely get to hear from, tucked away out of the spotlight. If the Steelers’ head chef was interviewed, you can bet I’d write about it (L.T. Walton loves Thai food!). So I geeked out when Missi Matthews from Steelers.com sat down with Mark Gorscak, team scout and man who conducts the 40 yard dash.

That’s been his job for the past 14 years but it was one he accidentally embraced and then immediately attempted to get out of.

“I got roped into it and I’m a sap,” he told Matthews. “They needed a guy to stat [the 40] and like an idiot, I volunteered to help out. [Long time scout C.O. Brocato] saw me do it and said, ‘you’re in, I can work with you.’ And I go, I ain’t doing this, are you kidding me? Because you’re in front of all your peers.”

The scout called up Kevin Colbert to have him persuade Gorscak into taking the job. And Colbert gave him one very good reason for taking up the offer.

“You got to look at it from the Steelers point of view. You’re on the floor and get to know all those players down there. If there’s any trouble, if anything goes wrong, or if anything goes great, you’re going to know about it. It’s valuable to us. And that’s why I did it.”

What the players run draws the headlines but there’s another number scouts track: the number of steps you run it in. Gorscak said one of the most impressive 40 times he had ever seen run was Calvin Johnson, who ran a 4.4 flat in 2007. He did it in only 18 steps, beating the average of 22 to 24.

“Dri Archer ran real fast….Calvin Johnson was 6’5, Archer was 5’8. He did it in 18 steps and he didn’t have the length. That was phenomenal about the amount of power he forced out to go forward.”

Maybe Archer isn’t the best example of counting steps but it’s a cool little insight I don’t recall ever being referenced before.

Though it’s easy to think the entire group is a nervous wreck with all eyes on them, Gorscak says it doesn’t bother most prospects.

“I don’t care if it’s Division Three, I-AA, Championship game, they have focus. They’re determined, they have passion about the progress they’re trying to make.”

You can expect Gorscak to be back for his 15th year at the 2018 NFL Combine.