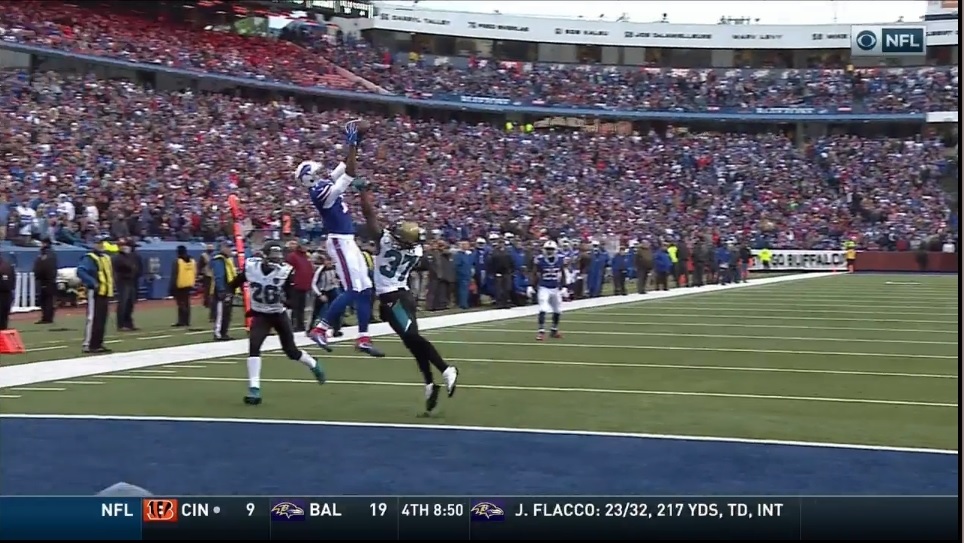 I was hoping and thinking our first free agent breakdown would be of somebody a little more high profile. But alas, it was Justin Hunter, who conceivably could miss out on the 53 man roster. It’s a little underwhelming and disappointing but Hunter deserves a thorough look just like anyone else.

Spent the morning watching him during his career. Here’s my analysis.

– Height/weight/speed player with impressive numbers coming out of college (6’4 196, 4.44, 39.5 vert)
– Long-strider with build-up speed and shows ability to be a big-play, vertical threat, athleticism to beat bracket coverage/double-teams
– Tracks the football well, adjusts to the flight of the football, with leaping ability to high point the ball over practically anyone else
– Shows hand/eye coordination on difficult throws, passes that get deflected or players who get in his line of sight, able to make juggling catches
– Threat of speed is respected and forces corners to play with cushion and open hips earlier, creating space on underneath breaking routes
– Versatile player who lined up outside and in the slot

– False steps off the line of scrimmage and is often late off the ball because of it, too much time wasted to take his first step forward, most often seen in off-man and zone coverage when he has space
– Prefers to “hop” at the top of his routes on short/intermediate game and struggles to separate vs press coverage
– Will drift out of breaks on crossing routes, letting DBs undercut him and contest the football
– Struggles to stack CBs vertically and creates too many contests with the cornerback, needs to use size/speed to box the DB out
– Limited YAC threat who isn’t “quick to the tuck,” most of his yards comes in the air
– Career incredibly inconsistent, boom-or-bust, and majority of impact came on vertical portion of the route tree

There’s no question the Steelers have a “type” at WR. Sammie Coates. Martavis Bryant. Justin Hunter. Tall, fast, explosive. And it’s hard to blame them; those are the game-breakers, the dynamic threats who can turn the tide of a game or salt one away.

Hunter’s second round value never matched with his actual production: 78 career catches but for 12 touchdowns and nearly 17 yards per catch. He’ll flash for a moment and then disappear for the rest of the game, often rotating in and out of the lineup.

But even in 2016 where he caught just ten passes for the Buffalo Bills, he made big plays. Four of those ten catches found the end zone. This might’ve been the most impressive, running this flag route, adjusting to the ball, high-pointing, and leaping over two defensive backs for the touchdown.

And in Week 6 against the San Francisco 49ers, he beats this bracket coverage. Lined up in the slot, he runs another flag route, beating the inside/outside leverage he’s facing and catching this well-thrown touchdown pass.

Hunter isn’t just an outside, X type of receiver. He spent a surprising amount of time in the slot, something I didn’t expect, and started Week 13 against the Oakland Raiders inside. 6’4 in the slot, often against a 5’10/5’11 cornerback? That’s an obvious mismatch.

Four of Hunter’s 12 career touchdowns have gone for 40+ yards. Another three have come inside the ten. In total, 58% of his touchdowns have come from inside the ten or 40+. That’s the “feast.” Splash plays around the red zone, an area where the Steelers’ offense did falter down the stretch, or from way downtown so the offense doesn’t always have to go 10 plays, 80 yards. Long, sustained drives.

The bad? There’s plenty of that, too. Hunter is slow off the line when given space, taking a false step by picking up and putting down his backfoot to generate more explosion off the line. Watch how much later he gets off the line than anyone else, being the last guy to take his first actual step forward. 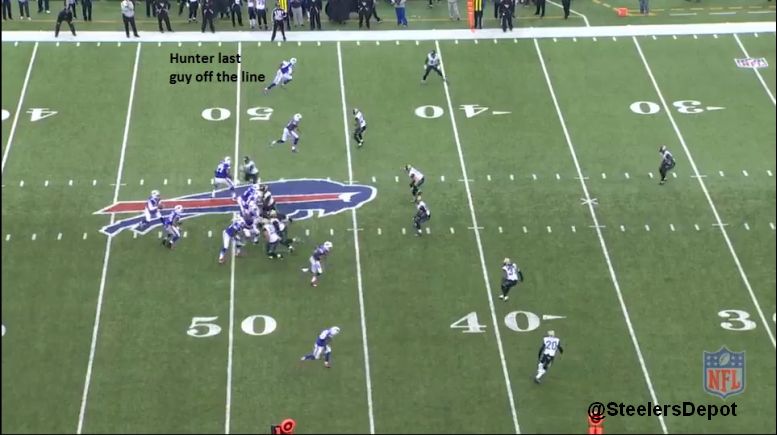 I get that he’s a long strider but I’d like to see him to eliminate some of those bad habits.

He’s more decisive against press coverage because he has a direction and sense of purpose coming off the line but that doesn’t mean he does a better job separating. He is high-cut and stiff when trying to make nuanced movements in his stem. It usually ends up with him mirroring the cornerback, like you’re walking down the street and awkwardly do that thing where you keep changing the same direction with a total stranger. Lots of wasted time/motion. Here he is at the bottom of your screen.

His route tree has mostly been vertical routes or at least, ones that use his threat of speed to create space (deep out where the CBs flip their hips to protect vertically) so when he’s running something else, he’ll get exposed. Watch him drift on this dig route, breaking at the 48 but by the time the ball gets there, he’s drifted to the 45. 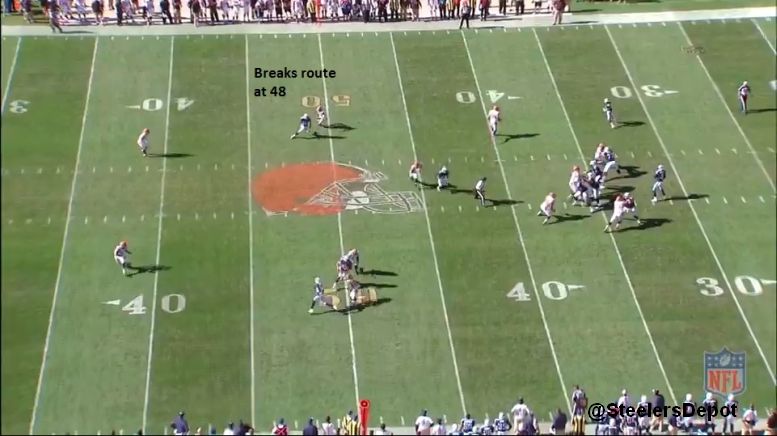 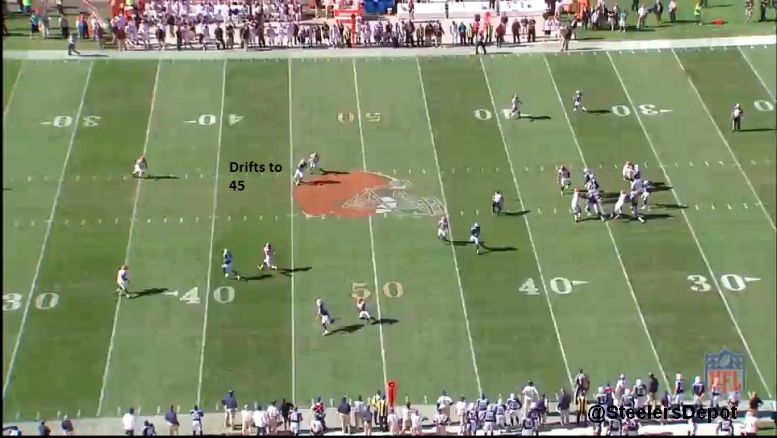 I’m pretty much in-line with what Dave Bryan wrote earlier today. Hunter serves as an insurance policy for Bryant and Coates. They’re all cut from the same cloth, all peas in a pod. They’re dynamic vertical threats who are still trying to figure out the rest of their game. Bryant is clearly the most advanced, Coates began to figure things out before his fingers turned into mashed potatoes, and Hunter has never quite gotten it.

In an explosive, vertical-minded offense that at the worst, helps create space for underneath threat, Hunter’s skillset fits right in.

As you may know, it’s almost a guarantee any free agent Kevin Colbert signs makes the roster. Hunter may be the exception. If Bryant is reinstated and Coates looks good in camp, I personally expect him to, Hunter’s spot is in question. He’s not going to offer anything different than those two and Darrius Heyward-Bey is a deep threat and excellent special teamer. Throw in Eli Rogers and you have five receivers. Hard to see any of those guys, unless there’s self-inflicted wounds, getting bumped off the roster for him.

It’s possible the team keeps six receivers. But is there a compelling reason for Hunter to be that guy? He’ll look good in shorts and make some big plays in camp, but I can’t guarantee he’ll be there Week One.