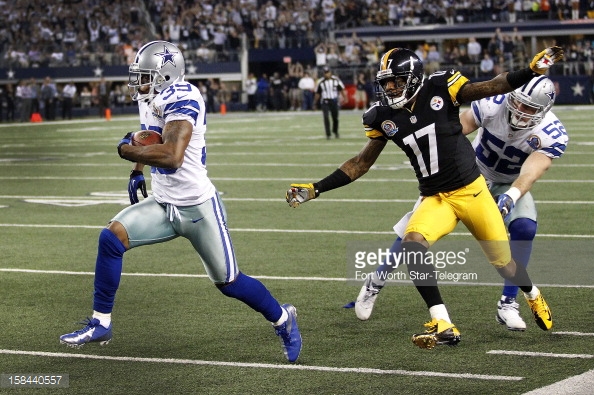 While Pittsburgh Steelers fans have spent the past week and a half since the start of free agency watching the paint dry, their rivals in the division, the Baltimore Ravens, have been perhaps the most active team in the entire league, making some significant signings and re-signings that has focused largely on improving a defense that was already the better half of their roster.

Their latest move was to bring in a veteran cornerback to shore up some instabilities that they have had at the position for the past couple of years. They agreed to a deal that with a club option could extend to four years with former Chiefs and Cowboys defensive back Brandon Carr.

A former fifth-round draft pick, Carr has never been named to a Pro Bowl, but he has been a solid, steady, and dependable player for the past nine seasons, with the previous five in Dallas. He had started every single game of his career since his rookie season in 2008, the longest active streak at the position.

He has not made as much of an impact, however, in recent years; in fact, his lone interception during the 2016 season was his first since 2013. He has not recorded 10 or more passes defensed since that time, either.

He was more of a break-on-the-ball defender previous in his career, however, which he may be asked to do more in Baltimore. He recorded 14 interceptions in his first six years, as well as 88 passes defensed. While his played in more zones with the Cowboys, he was more active in run support, another feature the Ravens will covet.

Carr will pair with former first-round draft pick Jimmy Smith, who while healthy during the past couple of seasons has looked like a shutdown cornerback at times. But Smith has been the opposite of Carr in terms of durability.

Smith missed eight games during the 2014 season, and while he played in every game in 2015, he did so while nursing injuries. He missed the final five games for the Ravens last season and has in total missed 22 games in five seasons.

For his part, the 2011 draft pick has recorded eight interceptions with 46 passes defensed in 56 starts with one touchdown, a sack, two forced fumbles, and 226 total tackles. Provided that he can return to form, the Ravens should have an improved cornerback pairing from last season.

And they will go nicely with the promising second-year cornerback, Tavon Young, a mid-round pick who ascended the depth chart and in fact played some very fine ball, ending up in the starting lineup. The addition of Carr will give them the opportunity to work him more in the slot.

The Ravens also made an adjustment on the back end, releasing safety Lardarius Webb, who made the conversion to that spot in 2016 and replacing him with free agent Tony Jefferson, who is one of those ‘moneybackers’ that are becoming increasingly prominent around the league.