With the Pittsburgh Steelers locking down another free agent, we’re breaking him down for Steelers’ Nation. Cornerback Coty Sensabaugh is a far cry from Logan Ryan or Dre Kirkpatrick and he’s coming off an especially rocky 2016 campaign. So get to know who he is, where he struggles, where he succeeds, and how you can expect him to be used in Keith Butler’s defense.

We’ll set this report up similar to the one on Ladarius Green a year ago. We’ll break Sensabaugh down in run support, coverage, special teams value, and how he’s been used in his career.

Quick background on his career arc. Drafted by Mike Munchak and the Tennessee Titans in the third round of the 2012 draft. Started 27 games for them and parlayed that into a three year contract with the Los Angeles Rams in the 2016 offseason. But that ended quickly. He started the first two games, got benched to begin the second quarter in Week Two, and was released after Week 4.

The New York Giants scooped him up and he played 113 defensive snaps the rest of the way. To keep track of things, here’s the uniform number he wore at all three places since we’ll be showing clips of him with each team.

It’s actually pretty good. Better than maybe what I expected after seeing some comments. Over the several games I watched, I witnessed only one missed tackle when Denard Robinson cut inside and upfield on him when Sensabaugh was the force defender.

He shows the ability to get off stalk blocks and make open field tackles on backs. Good job to keep vision on the ball, work off the block, and make the tackle in the open field.

Sensabaugh isn’t a powerful tackler but a good wrap up player who comes to balance and drives through with his lower half. When he’s able to keep his feet in coverage, he can close space and wrap up well.

In his only year as the full-time starter, starting in 15 games in 2015 with the Titans, he had 17 tackles against the run, making up about 29% of his total tackles of the season, which led all Titans’ cornerbacks. He isn’t going to be fierce in this area but he’s far from a liability, either, and he’ll stick his face in the fan. He’s been a base corner before so he knows the role and responsibility comes with it and the slot can be just as active.

Onto my scouting report of him against the run to sum things up.

The Good: Willing tackler. Does nice job to wrap up. Keeps vision on the football and able to shed stalk blocks in the run game. Comes to balance in the open field. Not afraid to take on bigger backs, doesn’t show fear, and generally embraces the run. Isn’t so over-aggressive he prioritizes the ball over the tackle, makes sure to wrap up. Supports run on the perimeter and doesn’t let the back get the edge.

The Bad: Not a powerful, impactful tackler. Tackling angle can be raised a bit, does shoot a little too low and vulnerable to runners being able to step out of his tackle. Doesn’t have great size and could have problems against bigger/taller receivers downfield.

Ah, the big question. Much like Justin Hunter, I feel like it’s been a mixed bag for Sensabaugh. He’s never been much of a playmaker – just three turnovers caused in his career, two interceptions, one forced fumble.

He earned a sizeable contract with the LA Rams heading into 2016. That ended briefly, struggling in the first two weeks, like getting torched by Tyler Lockett for this big pickup. He wasn’t great against the San Francisco 49ers either, who boasted one of the league’s poorest offenses, and the Rams still gave up 28 points in a dreadful Monday night game. Here’s an example of the former at the top of your screen.

And maybe the worst look he ever had, getting quite literally run over as a member of the the New York Giants – the team he went to after the Rams – against the Cleveland Browns. I really don’t even know how to break this one down. He’s at the top in the slot. The one getting truck-sticked.

What got him that contract with the Rams was better player in 2015 and moments like this. He reads this speed out, undercuts the route, and makes a house call.

The Good: Good feet and ability to transition out of bail technique, flipping his hips to run vertically or flip to close downhill. Uses leverage well and the sideline to his advantage. Reads the underneath game well and shows ability to make plays on the football. Works hard to stay in-phase, in hip pocket. Aggressive mentality in coverage and wants to make plays.

The Bad: Doesn’t have a reputation as a playmaker, only two career interceptions. Slightly better than average deep speed but vulnerable to getting beat over the top by the fastest receivers. Opens the gate too late in pedal or bail technique, allows receiver to eat up his cushion and makes him vulnerable to getting beat over the top. Boxed out by bigger receivers downfield. Not ideal in press due to a lack of strength and elite speed.

As a starting corner, he didn’t do much with the Titans, at least, not in the games I watched and the snap counts I took a look at via Football Outsiders. Ditto with the Rams, even when he got benched. He saw a variety of work with the Giants though.

He served as the left end on the field goal block team, the right jammer on punt return, and L1/R1 on the kick coverage unit. His most notable play I saw on special teams was a touchdown-saving tackle against the Cincinnati Bengals, tackling Alex Erickson to stop this long return from finding the end zone. Good angle, effort, and speed to make the play.

Sensabaugh is William-Gay like in how he’s been used, which is to say he’s been all over the map. With the Titans, he was the saw starting action at both outside corner spots who kicked to the slot in nickel and sub-packages. In LA, he played strictly on the outside at RCB. And with the Giants, he moved back to the slot, where I believe he began his career in Tennessee.

So essentially, he’s played everywhere and that versatility is helpful to deal with any injuries without playing a ton of musical chairs. If Gay makes the roster, having experienced depth won’t be an issue. Quality, a different story, but they won’t resort to throwing players into roles they’re not comfortable with. Sensabaugh and Gay plug a lot of holes.

Tennessee, with Dick LeBeau, he got used in a lot of Cover 3 and play with outside leverage, the goal to funnel the route tree to the single high safety. With the Rams, and maybe this created the issues he had that led to his benching/release, he played a lot more man coverage with inside leverage and forced to cover the vertical game without as much help like he did in Tennessee. Here’s one example of the difference. 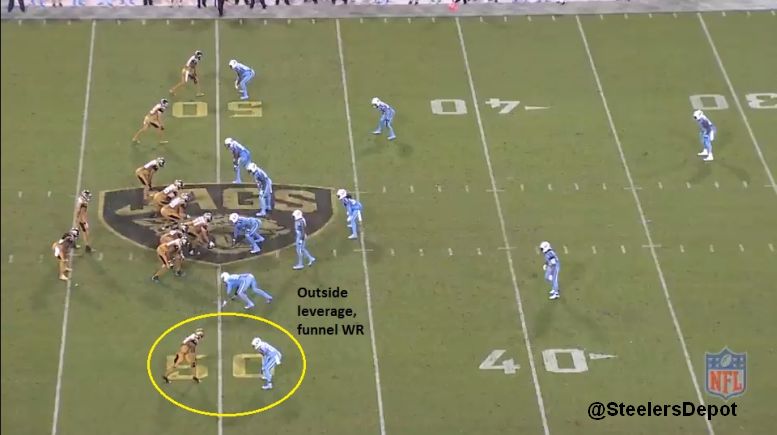 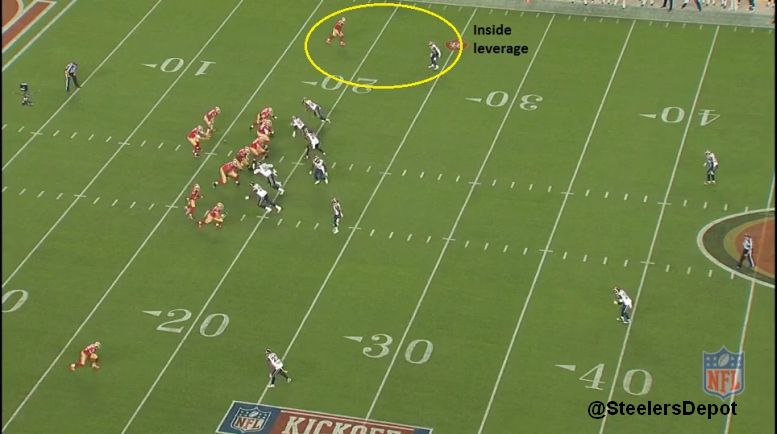 With him being in the slot with New York, leverage doesn’t really matter, but I felt like he played more man than zone. Of course, at all three stops, there was a mix of man and zone coverage. I liked him as a Cover 2 corner, able to reroute and sink with any vertical outside release and then driving on any throw to the flat.

Ok, we’ve reached the end and thank you if you stuck around. Like I’ve been hinting at, Sensabaugh is the new Gay. Little worse against the run, little better in coverage, with a lot of versatility. That doesn’t mean Gay is getting bumped off the roster – we’ll get a better idea of that post-draft. But given the weak-sauce depth at cornerback, I expect Sensabaugh to make the team and there is a scenario where both guys can make the squad.

The Steelers had to sign a veteran cornerback to give them something extra before the draft and reduce the obligation at least a fraction of a bit. In that sense, I am happy but by no means ecstatic. This wasn’t *the* move I was expecting Kevin Colbert to make at the position.

Sensabaugh isn’t the big, comfortable mattress for this team to sleep on. He’s the futon your roommate in college had. It won’t last forever but in a pinch, it’s cheap and serviceable.