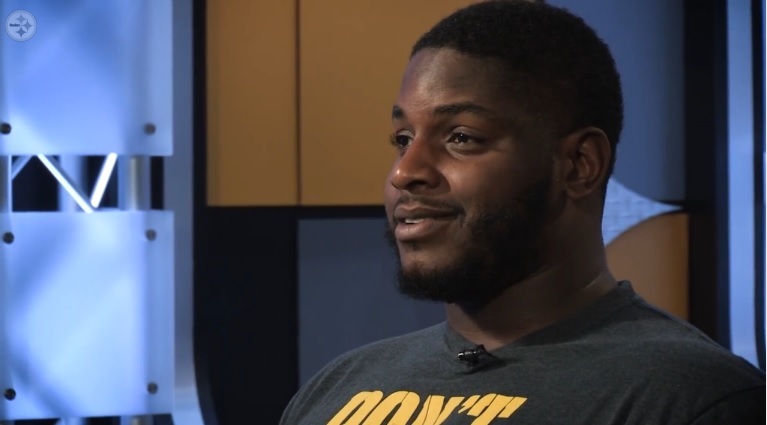 The nickname “J-Wobble” grew on Javon Hargrave throughout the year, maybe in the same way his performance on the field grew week-by-week. Heading into Year Two, he says he’s ready to take the next step forward.

Hargrave sat down with Steelers.com’s Missi Matthews to discuss his rookie year. There was the obvious jump to the NFL, especially coming from FCS South Carolina State, the quality of it all, but the quantity was also an adjustment for him, playing more football than he ever had before.

“I feel like I just played two seasons of college football. We only play 11 games of college. I just finished my 23rd game of the NFL. So it’s way longer than college. You have to really prepare yourself and take care of your body for that long ride.”

Luckily, Hargrave was in a locker room with enough veterans to learn how to do just that and no one is wiser than James Harrison.

He, like every other defensive linemen on the team, praised Cam Heyward’s leadership and involvement with the team, even after he was lost for the season. It was Heyward’s injury that put Hargrave into the spotlight and forced him to be an impact player.

“I had to grow up real quick. I had my ups and downs but ended up getting better over the course [of the season].”

Not that Hargrave didn’t want the challenge.

“I had big plans for myself coming into this situation. When my opportunity came, I just felt like I had to get better and seize that moment.”

His rookie year ended with 27 tackles, two sacks, and his first NFL touchdown, recovering a fumble in the end zone against the Cleveland Browns. He won the starting nose tackle job out of camp and became a key cog in the Steelers’ nickel defense, their majority personnel grouping, when Heyward went down.

He’s risen to the occasion and succeeded on every level. From one of the most dominant college careers for an interior defensive linemen, to a great Senior Bowl and Combine week, and now, to showing he can hang in the NFL. Hargrave says he knows what he has to do to build on that for 2017.

“I know my rookie year, I started picking up on things kinda late. Now, I just want to be able to study film more and be able to pick up on things the offense likes to do.”

I said it when writing about Stephon Tuitt but it’s worth repeating. With a healthy Heyward, the Steelers will have one of the best – maybe the best – three down front in the entire NFL.