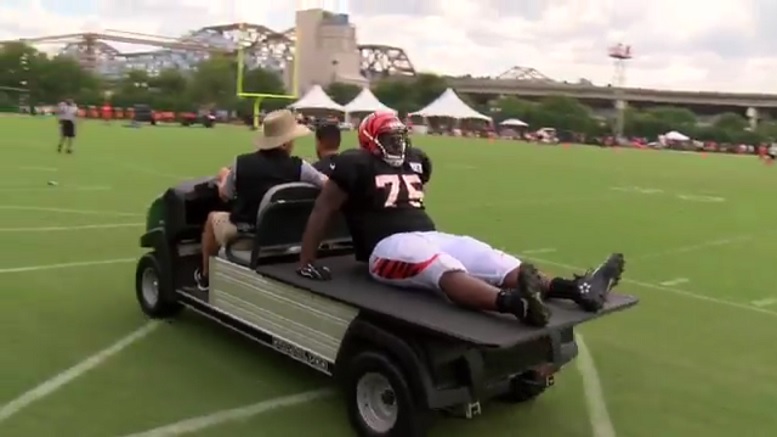 The Cincinnati Bengals have seen some significant defections at the start of free agency along their offensive line. Yesterday saw one of their veteran defensive linemen depart in free agency, as defensive tackle Domata Peko agreed to join the Broncos on a two-year contract worth $7.5 million with just over half of that guaranteed.

That is quite a nice little contract for a player such as Peko at this point in his career. Entering his 12th season at the age of 32—he will turn 33 in November—Peko is generally regarded as a run-stuffing 4-3 nose guard, which is a role that has been falling out of favor with the increased frequency of three-receiver sets from offenses.

Originally a fourth-round pick of the Bengals in 2006, Peko has spent his entire career with Cincinnati and has been a consistent starter since his second season, only ever missing games in the 2009 season. He recorded 37 tackles and three passes defensed, though with zero sacks a year after posting a career-high of five.

It’s likely that Peko will be replaced by another fourth-round pick, 2016 NFL Draft selection Andrew Billings, which is a name that will no doubt be familiar to the majority of our regular readers. It was quite a surprise to seemingly all but the actual people doing the drafting that Billings slid all the way to the fourth round when he was considered to be draftable as early as the first.

It would make little sense at this point to walk back the fact multiple writers of this site campaigned for the drafting of Billings as a possible first-round draft pick, if not later, but the draft analysts also found his slide surprising and prompted the networks covering the draft to contact teams to find out why they were not evaluating him as highly as their own experts had.

The obvious answer came back that teams weren’t willing to spend so much on a player that would offer little in the way of the passing game, in spite of the fact that they viewed him very highly otherwise, and that he would be a first-rounder in another era.

The Pittsburgh Steelers selected Javon Hargrave in the third round of that draft as a small-school product who was highly productive as a pass rusher. Including the postseason, he registered three sacks during his rookie season.

Billings’ rookie year did not go so well, as he spent it on injured reserve, accompanied by the team’s first-round draft pick, cornerback William Jackson III, whom the Steelers would have drafted had he been available, according to their own defensive backs coach.

I would imagine that there are a number of Steelers fans who will be interested to following Billings’ career as it gets started in 2017. With Peko’s departure, that leaves an obvious opening and a chance to claim a starting spot in the run-stuffing position, and there isn’t exactly a lot of competition for him to overtake, with Pat Sims posing the biggest threat.