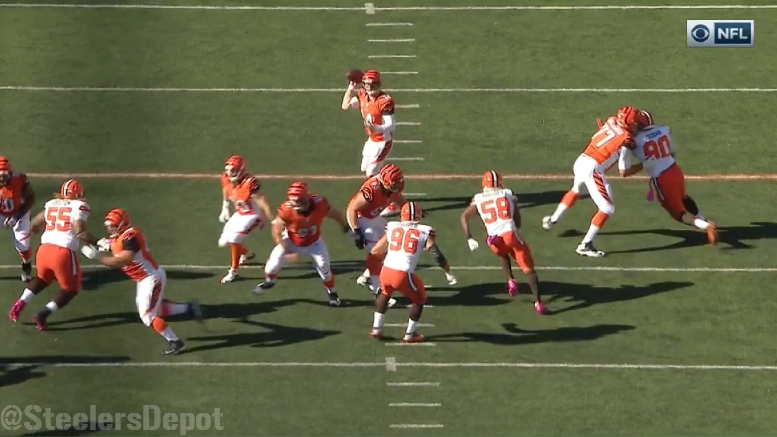 So far, it has been another year, another exodus out of Cincinnati, as the Steelers’ rival Bengals are once again hemorrhaging significant talent with an almost apathetic disposition toward it. All they have really done so far is retain cornerback Dre Kirkpatrick while seeing their other two two-tier free agents, and other less substantial but important players, depart as well.

Contract agreements were announced before free agency even officially begun for longtime left tackle Andrew Whitworth and five-year veteran guard Kevin Zeitler, both Pro Bowl players and the Cincinnati Bengals’ two best offensive linemen. It was assumed that they would lose one. To lose both almost defies belief.

Could you imagine if the Steelers lose Maurkice Pouncey and David DeCastro in the same offseason? And lest we forget, the Bengals also lost their veteran starting right tackle the previous season. Speaking of whom, given the failures of their first- and second-round picks from the 2015 NFL Draft at the tackle position, a reunion with said tackle may still be in the cards.

Cincinnati last offseason lost their starting Pro Bowl safety in Reggie Nelson with nobody particularly threatening to replace him. They lost the right tackle, Andre Smith, thinking at least one of their young and high-pedigreed tackles would be able to step up. And they lost Marvin Jones and Mohamed Sanu, two of their top three receivers, forcing a rebuild of the receiving corps on the fly that wasn’t entirely successful, and certainly not seamless.

In addition to the defections of Whitworth and Zeitler already this season on the offensive line, the Bengals have now also lost two key members of their defensive line. As I have previously written about, longtime defensive tackle Domata Peko signed a free agent deal elsewhere.

Yesterday, they also lost rotational defensive end Margus Hunt, who played a bigger role last season than he had previously in his career. The only other defensive end of note on the roster currently outside of their starters is Will Clarke.

There are, at least, options to replace Peko’s role, including last year’s former fourth-round draft pick in Andrew Billings, who is coming off of a rookie season spent on injured reserve. The Bengals are a defensive front who values using a heavy rotation, however, so it is inevitable that they will have to make a substantial addition here.

They are reportedly going to be hosting Connor Barwin, and the suggestion is that they will likely draft multiple defensive linemen, but they are certainly doing themselves no favors entering the draft with clear holes on their team, especially after losing their two best offensive linemen.