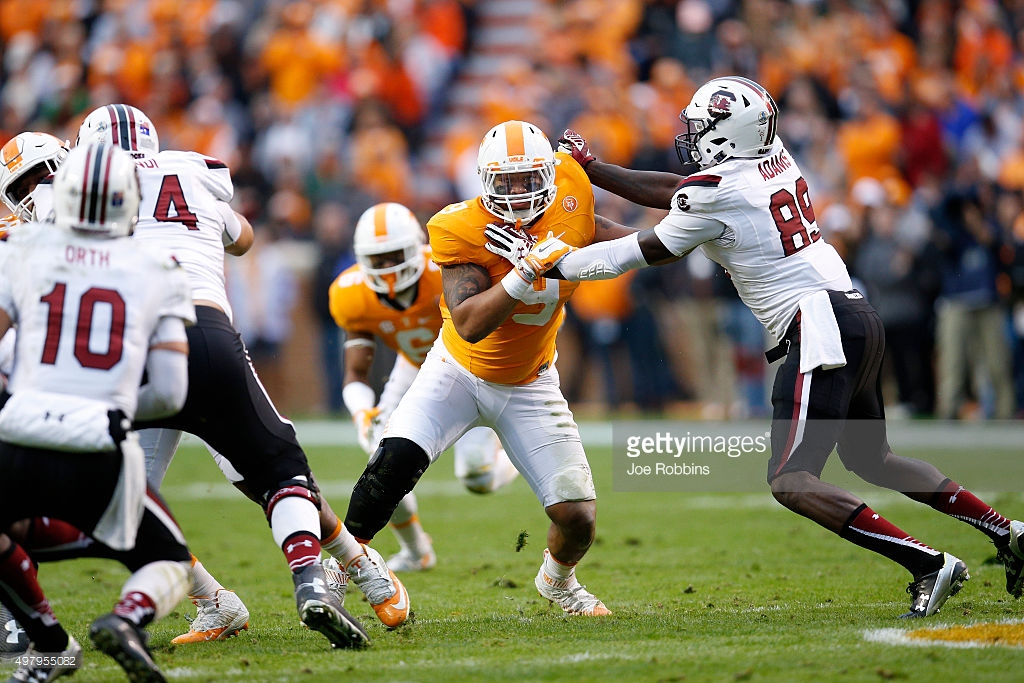 Halfway home! We flip over to the defensive side of the football today with the front seven working out, the defensive line, edge guys, and off-ball linebackers. Let’s break down some things to look for.

– Auburn’s NT Montravius Adams needs to have a big day and I am cautiously optimistic he’ll do just that. His 40 time won’t be good, which is fine, the guy is 304 pounds and thickly built, but he shows a good first step off the line. His ten split should be, needs to be, above average. And I’m curious to see how he looks by the time he hits the on field drills. Conditioning was a problem on tape. Let’s see if he’s improved his stamina.

If he can come anywhere close to that, he’ll walk away with one of the best workouts anyone has had in five years. And he already put up 33 reps on the bar despite his freakish 35 inch arms. It’d be tough for the Cleveland Browns to pass up on him.

– Another Texas A&M kid, Daeshon Hall, could impress. He’s long like Garrett with a good first punch. Could see him go somewhere like Cincinnati who like that type.

– Reviews are mixed on Iowa DT Jaleel Johnson. He’ll flash as a pass rusher but it isn’t consistent enough. If he can show a good ten split and some impressive explosion numbers, he may start to change minds.

– Of course, Villanova’s Tanoh Kpassagnon will be one of the most intriguing guys to watch. Crazy size, 6’7 289 with nearly 36 inch arms. Dude is rocked. Dying to know what kind of athlete he is. And someone the Steelers have interviewed.

– Ditto with Isaac Rochell. Lacks length but I think he still makes sense as a five tech. Wasn’t a big pass rusher in college and gets pressure with effort more than an actual go-to move so let’s see if his testing can move the needle a bit.

– Tulane DT Tanzel Smart probably isn’t a fit in Pittsburgh but I still want to check him out. He’s a squatty dude but showed a quick first step and violent hands at the Senior Bowl. Let’s check out his ten split and how loud he is hitting the bags in drills.

– Eddie Vanderdoes had success earlier in his career at UCLA before an injury derailed things. At 6’3 305 with length, he’s someone to check out.

– Demarcus Walker is a little tweener-ish though probably not as much as some make him out to be. 6’3 280 with 33 inch arms. If he can test really well though athletically, someone will be determined to find a way to make him work.

– Michigan’s Chris Wormley is someone the Steelers interviewed. Has five tech size with a first step fit  for a three tech. His ten split should be one of the better times, relative to his size. Strong club move and should show off his violent hands.

– Keep an eye if Tennessee’s Derek Barnett works out. Reportedly was very sick today and is trying to feel up to putting in work tomorrow. If he does and his numbers aren’t great, you can probably attribute it to that. The fact he’s going out there competing would speak highly enough of him.

– Ohio’s Tarell Basham isn’t getting much buzz but he’s a put together and powerful pass rusher. Has great size and length, weighing in at 269 pounds with 34 1/4 inch arms. Translates when he converts speed to power.

– I think I only watched two games of TCU’s Josh Carraway and it was hard to gauge how productive he can be as a pass rusher. Wasn’t really used in that capacity. His baseline athletic testing is going to be more important than the typical player. At 6’3 242 with 34+ inch arms, he deserves a close look.

– Carl Lawson is obviously going to be a name Steelers’ fans should be interested in. Put up an insane 35 reps on the bar. His COD numbers and ten split will be important as will how he looks moving backward in coverage. Something he didn’t do a lot at Auburn.

– Anxious to check out Takk’s McKinley’s change of direction numbers. On tape, I saw someone who looked tight. Maybe he’ll prove me wrong, I don’t want to pretend like I *know* how he’ll test. Look for the ability to bend in drills too, even in drills with the bags on the ground. Is he flexible enough to get low and slap each bag as he moves down the line?

– Haason Reddick could walk away with the fastest 40 time of the entire day. In fact, I really expect it, faster than even Jabrill Peppers. Regardless, he should test through the roof and look the most natural in coverage drills. Did well when he moved off ball in the Senior Bowl.

– Big day for Derek Rivers, the Youngstown State kid the Steelers clearly have interest in. A big day would obviously be huge and show he’s not just a guy who succeeded against FCS competition. Of course, if he does, that likely takes him out of play for Pittsburgh’s 62nd pick. Would have to take him at 30…not that I’m complaining about that.

– Jordan Willis has a Jarvis Jones stigma around these parts and it’s a fair comparison to make. So Willis has a chance to shatter that notion if he can turn in respectable times tomorrow. He won’t fly but if he run somewhere i the high 4.6’s, I’ll be pretty happy. His agility drills will be much discussed too. As they should be.

– Can’t say I’ve been a big fan of Ryan Anderson so far. Just see an average athlete without a real go-to move. Think he needs to test really well to stay relevant in an uber-deep edge class.

– As I mentioned on the last The Terrible Podcast, Houston’s Tyus Bowser should look really good dropping into coverage. Did it more than maybe anyone at Indy at his position and could have the Steelers very interested.

– Florida’s Alex Anzalone is someone I’ve talked up in the past. Big guy (6’3 241) so let’s so how well he moves. Gators’ career was marred by injury so this is a chance to get a good, healthy look at him.

– What will be Jabrill Peppers time? And don’t compare that figure with the linebackers. Save it for Monday with the defensive backs. That’s where he’ll play at the next level. He should show straight line speed and explosiveness. Those are his best traits.