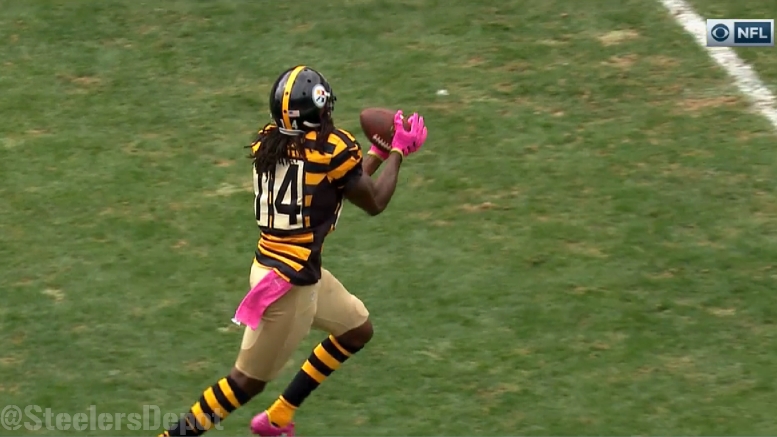 It’s lucky for Pittsburgh Steelers wide receiver Sammie Coates that first impressions aren’t everything. The 2015 third-round draft pick did not spend much time impressing his coaches during his rookie season, which helps explain the limited amount of time that he saw on the field that year.

But he saw a much-expanded role at the start of the 2016 season in part due to growth and in part due to necessity. Injury and suspensions granted him the opportunity to essentially function as a starting wide receiver in spite of the fact that he only saw a couple dozen snaps throughout his rookie season.

And he made the most of that opportunity while he was healthy. His stat line through the first five games has probably been rewritten here enough that many of you have memorized it by now: 19 catches, 421 receiving yards, two touchdowns. He caught six passes in each of his last two games in that series and posted his first 100-yard game and his first two touchdowns in the game in which he suffered a hand injury that derailed his season.

The second-year wide receiver fractured two fingers on his left hand in addition to sustaining ligament damage. The debilitating injury clearly affected him throughout the rest of the season. He was limited to just two receptions for 14 yards in his final nine regular-season games—he sat out the last two with a hamstring injury—after catching six passes of at least 40 yards in the first five.

Jeremy Fowler initially reported that Coates was believed to undergo treatment in the offseason for his hand for a few weeks to determine whether or not he would need surgery. He evidently did not require that long after he verified himself on social media that he indeed went under the knife.

This obviously raises questions about why the Steelers did not bother to do this during the regular season when you consider the fact that he was very sparsely used. They waited and waited on him throughout the year, attempting to re-insert him into the lineup on multiple occasions. He did finally come down with a 30-yard pass in the AFC Championship Game against the Patriots, but he also dropped or failed to secure a few other catchable balls.

I must say that I was relieved to read that Coates had undergone surgery. I took it as confirmation that the hand injury was a major obstacle in his ability to catch the ball, which seemed to disappear after the first five games when it had previously been present, with ample evidence.

The former Auburn product really looked like he had the potential to take the league by storm as he continually showed weekly improvement and statistical production in the early stages of the season. The hand injury was like running into a brick wall. Hopefully this hand surgery is the rope that will allow him to climb over that wall and resume the course that he set on at the outset of the 2016 season.