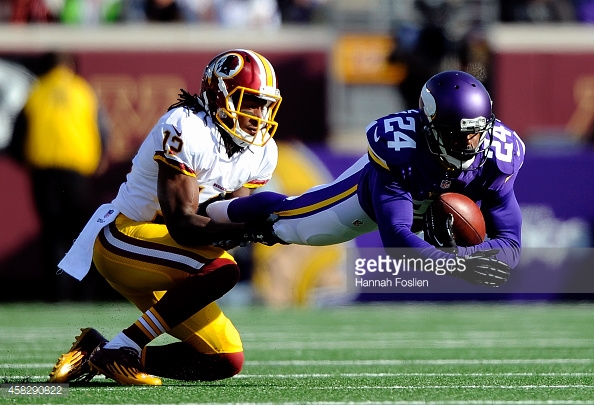 This isn’t just the par-for-the-course dot connecting. The Minnesota Vikings seem likely to part ways with slot cornerback Captain Munnerlyn. And if history tells us anything, the Pittsburgh Steelers could have interest.

First, the Vikings. The Star Tribune is reporting the team is likely to move on from Munnerlyn, given their interest in fellow slot corner K’Waun Williams and selection of Mackensie Alexander in last year’s draft. Munnerlyn spent the last two years with Minnesota, serving as their #3 corner, picking off two passes and forcing a pair of fumbles.

With just average production and the fact he’s about to turn 29, his price shouldn’t come at a steep tag.

When he signed with the Vikings before the start of the 2014 season, the Steelers did have reported interest. Here’s a tweet from Scott Brown in March of 2014 about what cornerbacks the team was looking at.

Munnerlyn obviously on the list. The Steelers need to, at the very least, bolster their slot depth at corner. William Gay is the only cornerback on this team who has ever taken a snap there, assuming Sean Davis stays put at his strong safety spot.

And Munnerlyn also played with the Carolina Panthers from 2009-2013 so a guy like Mike Mitchell knows who he is and could offer some insight, for whatever that’s worth.

As a backup or starter, he makes sense. The latter might make even more and could instantly stabilize the Steelers’ depth there. It would push Gay into the top backup role everywhere, both outside corner spots and in the slot, instantly giving the Steelers a good group of four cornerbacks. If Senquez Golson plays well and shows why he was their second round pick, you have your five corners to roll with in 2017 and are feeling good about the short and long-term outlook of the roster.

It would ease any obligation the team feels of drafting a cornerback high, giving them more flexibility. Though they could always reinvest in the position, rarely a bad idea, and open Golson – or maybe even Gay’s – job up for grabs, or if the entire group plays well, just carry six cornerbacks. There’s options, is the point.