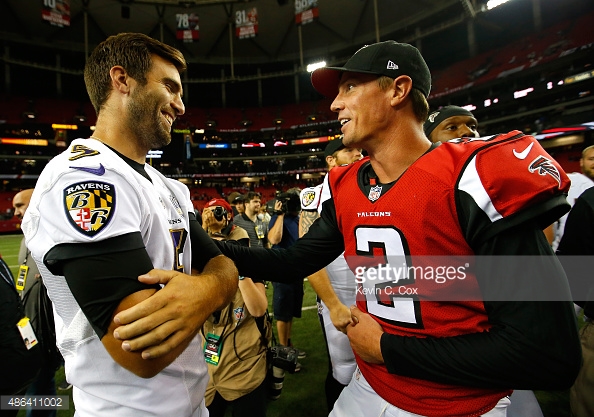 If the Baltimore Ravens regret not being more aggressive in the 2008 NFL Draft, they certainly would never admit it. And, really, it would be a hard argument to make. They drafted Joe Flacco and he led them to a Super Bowl, during which he was the game MVP and had an altogether excellent postseason run.

But Ian Rapoport wrote yesterday that things could have taken a different turn, as Baltimore was prepared to invest heavily in trading up to select Matt Ryan, who was drafted by the Falcons and who was the league’s MVP for the 2016 season—and, oh, was just in the Super Bowl last night.

It was known even at the time, of course, that the Ravens were considering moving up to get Ryan, but according to Rapoport, it nearly happened, and Baltimore was prepared to give up quite a bit to make it happen, if only the Rams, who held the second-overall pick, didn’t push it a step further.

The Ravens were going to give up their entire draft class to move up from the eighth spot in the first round to the second. Oh, and by the way, the Ravens had two third-round and two fourth-round picks, though no pick in the fifth. They also had an extra pick in the seventh round. Some of those extra picks were compensatory, of course, which were not yet tradeable at the time.

According to Rapoport, however, the Rams asked for an additional second-round draft pick the following year, at which point the Ravens balked and backed out of the trade. They settled on picking Flacco after trading back (thereby gaining some of those extra picks) from eight to 18, and things have generally worked out pretty well since then.

The Ravens did reach the playoffs in every season of Flacco’s career up until the past two years, and only in one of those years were they not particularly competitive—the year he suffered a torn ACL. But if we are evaluating pure quarterback play, it is easy to make the evaluation that Ryan is clearly the better quarterback between the two.

That doesn’t mean they got a discount after Baltimore had to work out a new contract for Flacco after winning the Super Bowl in 2012. The Ravens are paying him more than he is worth—paying him as if he were Ryan—and they have been stuck with that contract.

Both of those players made important contributions to the team during their Super Bowl season, even if they are no longer on the team. Either way, one cannot fault whatever decision that they made, because they did add some hardware to their trophy case.