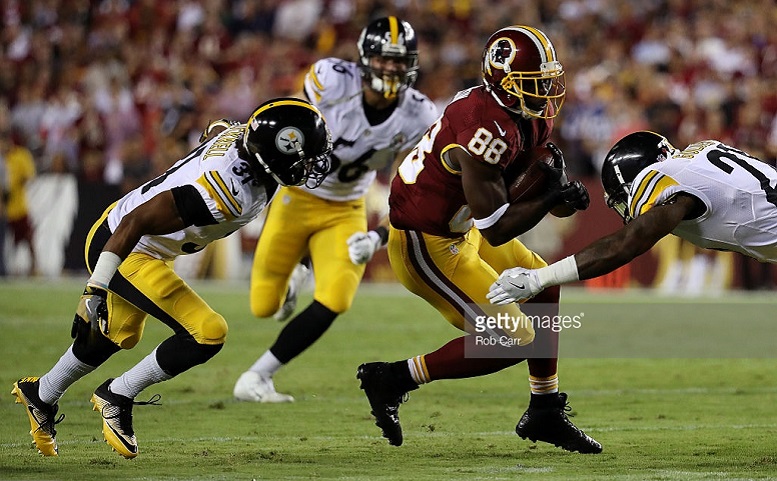 In a recent piece for ESPN.com, Pro football Focus attempted to suggest a soon-to-be free agent that each NFL team should sign during the offseason. In the case of the Pittsburgh Steelers, PFF suggested they sign Washington Redskins wide receiver Pierre Garcon and below is their reasoning as to why:

The Steelers have one of the top wide receivers in the NFL, but consistency from a No. 2 receiver is something they have lacked in recent years. Martavis Bryant has the straight-line speed to terrify opposing defenses, but he is coming off a season-long suspension, so how much faith should the Steelers have that he can contribute for a full season in 2017? Another option at the No. 2 spot was Sammie Coates, but while he led the league by averaging 20.7 yards per catch, he also led the league in drop rate, dropping 25.0 percent of the passes thrown his way. Garcon would add the needed consistency. He dropped just one of the 80 catchable passes thrown his way in 2016 for Washington, and he would be the perfect No. 2 opposite Antonio Brown.

Garcon, who signed a signed a five year $42.4 million contract with the Redskins in March of 2012, has since caught 376 passes for 4,549 yards and 21 touchdowns over the course of the last five seasons in which he missed just 6 regular season games. He will turn 31 in August and is set to become an unrestricted free agent on March 9.

While Garcon still appears to have a few productive years left in him, when you look at this year’s crop of wide receivers who are set to become free agents in a matter of weeks, he’s likely to be highly sought after and thus is likely to command a pretty decent contract. That, alone, is one reason to think the Steelers will not be interested in signing him during free agency.

Sure, the future of current Steelers wide receivers Martavis Bryant and Sammie Coates might be murky right now, but let’s not forget that the team still has wide receivers Eli Rogers, Demarcus Ayers and Darrius Heyward-Bey all under contract for the 2017 season. Additionally, if the Steelers want to throw a little less money at a free agent wide receiver during the offseason, they should probably just go ahead re-sign Markus Wheaton, not that I think that will ultimately happen.

PFF would have been better served to suggest the Steelers sign a moderately-priced free agent outside linebacker or cornerback instead of a wide receiver as that’s more likely to happen should they ultimately spend any considerable money once again during the first few weeks of the free agent signing period.