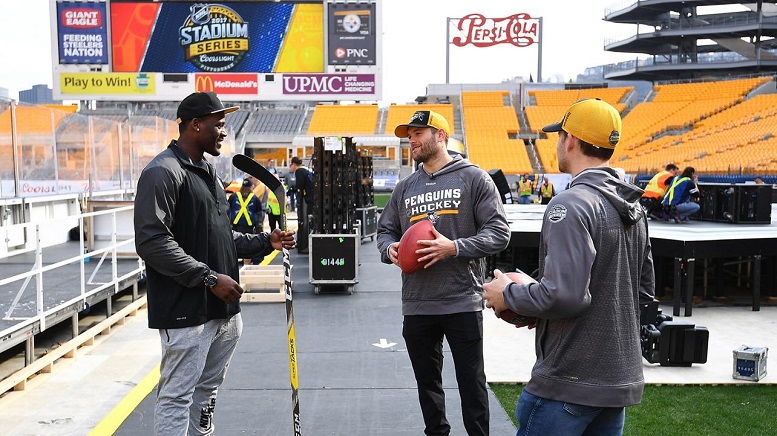 The NFL combine is coming up this weekend and will be televised on the NFL Network. The league continues to try to make every NFL event a marketing opportunity. My understanding is that spectators will be allowed in during certain events like the bench press. Three hundred pro prospects all together under one roof – a mega-opportunity for coaches & scouts check out the latest pro prospects. I wonder if any interaction happens between fans and coaches.

The above average Pittsburgh Steelers fans will be watching the combine and closely following every bit of broadcasting to handicap the odds of players that the Steelers will draft; keeping their eyes out for hidden athletic gems that briefly sparkle but may be the next great late rounders or undrafted free agents ala Antonio Brown (6th rounder) or Donnie Shell/James Harrison (undrafted free agents) that the Steelers scarf up. Dave Bryan & Alex Kozora already have mock drafts up for your review and critique. No mockery – give a good narrative response on the picks you agree or disagree with.

Before we know it, the free agency period will have started. Dave Bryan has already posted many articles on the Steelers free agents. Matthew Marczi has good analysis on each Steelers free agent along with his outlook of whether they will stay or go. Just put “Free Agents” in the search box on the Steelers Depot homepage to read them one by one. NFL.com has gotten into the act with a list of the “Top 101 available players” by Gregg Rosenthal & Chris Wesseling. They include four Steelers:

# 54 James Harrison – Surprised that he made the list at his age.

# 56 Lawrence Timmons – Very surprised that he is behind Deebo but perhaps it’s based on his position.

# 93 DeAngelo Williams – A testament to DWill’s personal training that a 34-year-old running back that has had injuries the past two years would crack the top 100.

What is surprising is a couple Steelers that did not make that top list – Markus Wheaton & Jarvis Jones. What am I missing here?

On to other Steelers offseason distractions:

The Pittsburgh Penguins beat the Philadelphia Flyers 4-2 in the Stadium Series event at Heinz Field this past Saturday night. They even had some Penguins from the zoo make an appearance slip sliding on the hockey ice. Arthur Moats was on hand to watch the game. He suggested having a frontline of Sidney Crosby, Antonio Brown & Le’Veon Bell along with a mask-less James Harrison in at goalie. I wonder if AB could pull off an ice capade double axel if he scored a goal.

The Pittsburgh Pirates began their Grapefruit League games, winning the first two games.  Of course, like preseason football it is more important to identify players that belong on the roster than winning games. Tyler Glasnow struck out 6 of 7 batters he faced to maybe convince the Bucs to reserve one of their reliever slots for him.

University of Pittsburgh’s men’s Basketball is in a nose dive. An 59-63 loss to Wake Forest and then 67-85 to North Carolina has destroyed any chances of an NCAA bid and with a 15-14 record will probably not even get an NIT bid unless something big happens in their upcoming games against Georgia Tech & Virginia. Welcome to the ACC; Yoi.

Ok folks; I’m sure everyone will be abuzz with news about the number of 220 bench press repetitions or those sub 4.3 40 times record next week some college players; but in a flash once the free agency period opens; we will be awash in news about signings. For Le’Veon, James, Lawrence & some other Steelers the theme is an old song by the Clash: “Should I Stay or Should I Go.”