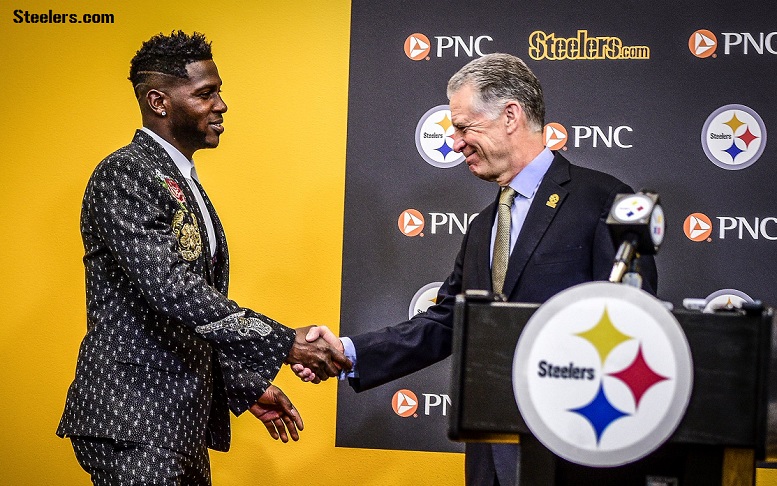 The Pittsburgh Steelers signed wide receiver Antonio Brown to a four-year, $68 million contract extension on Monday and on Tuesday the team held a press conference to announce the new deal. After that media session ended, Steelers team president Art Rooney II was interviewed by Mike Prisuta of DVE Radio on Steelers Nation Radio and he was asked what he’s now expecting from Brown now that he’s signed his new contract that will hopefully keep in Pittsburgh through the 2021 season.

“Well, he’s been playing at a pretty high level, breaking records, and so I think that we’ll be happy if he certainly continues at that level,” Rooney said. “I think one of the things you look for in a great player is consistency and that’s what the great players give you. It’s year in, year out great play and Antonio certainly has shown that. Over the last four years he set records for the most receptions over a four-year period in the league so he’s setting all-time records, which is significant, and so I think we’ll be happy if he is able to maintain that level and continue to make plays like he made on that Christmas day game.”

Even though Brown’s 2016 season will likely be remembered for that great touchdown that he scored late against the the Baltimore Ravens on Christmas day, his Facebook Live session following the team’s win over the Kansas City Chiefs in the playoffs will be as well in addition to him getting penalized a few times during the season for excessive celebrations following scores. With that said, Rooney indicated during his talk with Prisuta that he’s not too worried about those kind of things being an issue with Brown moving forward into his career in Pittsburgh.

“I think Antonio is a player that wants to be a great player, wants to do what’s necessary for the team to win championships and so I think when you sit down and talk to Antonio, that comes through and so I’m not worried about off-the-field kind of things,” Rooney said. “He’s an individual who’s one of the marque players in the league and he’s being pulled in a lot of different ways. And I’m not making excuses for him, but he just has a lot of different things kind of that he has to deal with that probably most other players dont have to deal with.

“And so we have to talk once in a while and he’s always willing to sit down with Coach [Tomlin] and kind of talk about where things are, things he has to deal with,. So I’m not really concerned about those kinds of things with Antonio. His focus really is on doing whats necessary to be a great player and to help out team win.”

During his talk with the media on Monday, Brown spoke about how well he relates to Rooney and the rest of the Steelers organization and because of that the team’s president was asked by Prisuta what it is about the wide receiver, individually, that resonates with him.

Brown’s work ethic is indeed rare as is his consistency and that’s why he received the lucrative contract extension on Monday from the Steelers that now makes him the highest-paid player at his position in the league.