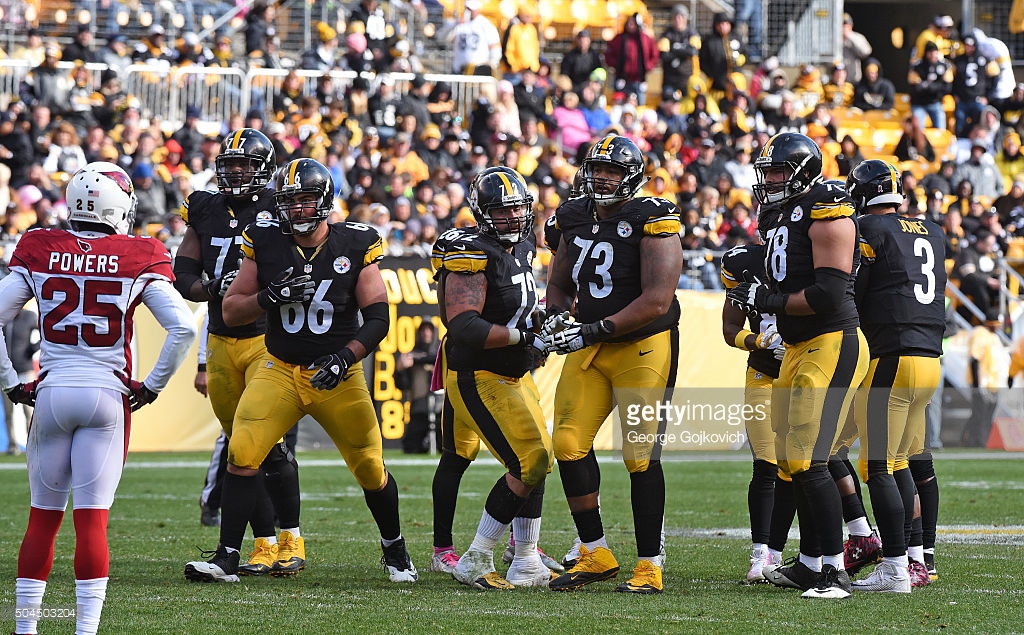 When the Pittsburgh Steelers host the Miami Dolphins at Heinz Field tomorrow the game will feature the only two running backs to rush for more than 200 yards in a game this season; Le’Veon Bell and Jay Ajayi. In week Six, Ajayi did so against the Steelers, let’s look at how Bell can return the favor tomorrow in the playoffs.

Since that horrible Sunday in Miami the Steelers have discovered a viable and effective power running game. The offensive line has been one of the best groups in the league and have managed to stay healthy for most of the season. Their blocking contributed to Bell being selected as the AFC Offensive Player of the month for December, and he didn’t even play in week 17.

The Steelers will look to exploit the Dolphins 30th ranked run defense, let’s breakdown the matchups in the trenches. Starting on the right, a healthy Marcus Gilbert, coming off a pro-bowl caliber season, will square off against Dolphins defensive end Andre Branch.

Gilbert’s run blocking metric per Pro Football Focus (PFF) is 78.5 for the 2016 season, while Branch graded out at 68.7 at stopping the run. Yes, there’s an almost 10-point difference in performance, or in other words, this is a match-up worth exploiting. Although the Steelers seem to run off-tackle plays more often to the left side of the line (with David DeCastro pulling) than the right, it’s evident in watching Bell this season that if Gilbert creates a crease Bell will find it.

Perhaps the hallmark matchup in the trenches will be David DeCastro against Ndamukong Suh, both players were elected to the Pro Bowl this season. DeCastro is rated as the Steelers best run blocker with a grade of 82.7, and Suh is rated as the Dolphins best run-stopper with a metric of 85.9. If DeCastro can handle Suh one-on-one, the Steelers will consider that a victory at the line of scrimmage. If Suh starts causing chaos at the point of attack the Steelers will need to double team him rather than let DeCastro get beat and incur penalties.

While the Dolphins rush defense is poor, Suh is a very good defensive tackle, and if DeCastro cannot block him consistently then the line will need to adapt quickly rather than let Suh have a major influence on the game. It will be interesting to see if Center Maurkice Pouncey will be able to block back on Suh when DeCastro is asked to pull. Pouncey’s run blocking metric is 73.7, but he is the line’s proverbial general, his ability to make sure everyone is on the same page, and to adjust on the fly, is something that cannot be quantified by a run blocking grade.

On the left side of the line Ramon Foster will be tasked with blocking Jordan Phillips. Foster’s run blocking grade is 82.3, Phillips run stopping metric is a baffling 46.3. One of the lowest grades I’ve seen from an interior defensive lineman that has played over 300 snaps. What makes Phillips poor run-stopping abilities even more stunning is that he’s playing beside Suh who routinely is double teamed. One would think that would make Phillips’ life more easy but that obviously hasn’t been the case.

With an almost 40-point difference in performance between Foster and Phillips’ effectiveness in the running game, and the Steelers preference to pull DeCastro as a lead blocker, don’t be surprised if Bell is running behind Foster for a good portion of his touches.

On the left end of the line Alejandro Villanueva (77.0) will line up against the rotation of Mario Williams (74.5) and Cameron Wake (46.2). While Villanueva has been constantly improving throughout 2016 and his metrics have reflected so. He’s evenly match against Williams, but Wake is a pass-rushing specialist and if he’s on the field the Steelers will have a decided advantage running the ball.

Other blocking contributors that will have an impact tomorrow are fullback Roosevelt Nix (80.5), extra lineman/tight end Chris Hubbard (57.4), tight end Jesse James (68.4) and tight end David Johnson (47.7). Nix has been a revelation since getting healthy and becoming a part of the running game (ask the Ravens) and he’s one of the best blocking fullbacks in the league in limited playing time.

Hubbard did an admirable job filling in for Gilbert when he was injured early in the season at right tackle. His run blocking metric has dropped some since he’s been implemented as blocking tight end, not because his performance has dropped off, but because his assignment is different. As a tight end, he’s asked to work to the second level and linebackers more often as opposed to when he was a tackle blocking mostly defensive ends.

With a set of talented blockers in front of him look for Bell to assert the running game against a poor run defense. While I can’t predict whether Bell will rush for 200 yards against the Dolphins, I can say that he will make his presence felt against an underachieving defensive front. Hopefully with a strong ground game the Steelers will be able to control the ball, the clock, and stretch their winning streak to eight games!