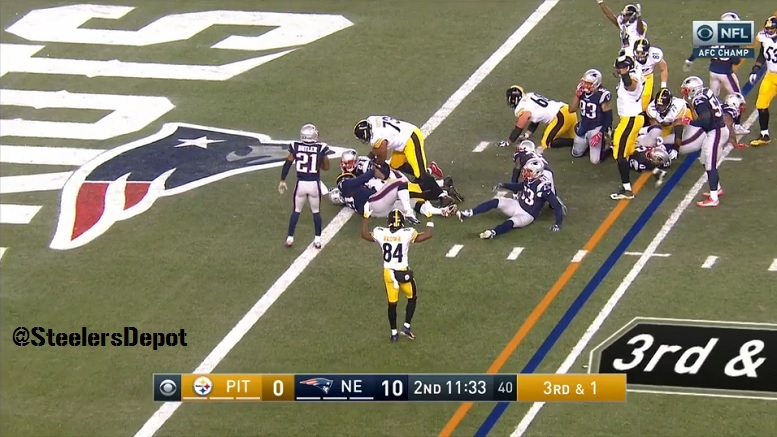 Pittsburgh Steelers wide receiver Antonio Brown was recently accused by Aditi Kinkhabwala of the NFL Network of moping after running back DeAngelo Williams scored his touchdown during the team’s Sunday night loss to the New England Patriots. Because of that accusation, there’s been a lot a discussion since then regarding whether or not Brown is more concerned about his own stats than he is the success of the team.

“Antonio Brown was open in the back of the end zone – he hung his head after that touchdown,” Kinkhabwala said. “He was the last player to walk off the field. Ben Roethlisberger had to meet him at the sideline and talk to him for a few minutes. I don’t know exactly what was said, but I can guess. I can guess that Roethlisberger was saying to him, ‘Keep your head in the game, we’re going to come to you, we’re going to need you.'”

To be clear, the picture above shows what Brown was doing after Williams scored, so I’m not really sure what Kinkhabwala is talking about or if she’s thinking about a different play.

On Tuesday, quarterback Ben Roethlisberger was asked if he indeed had a talk with Brown after that score during his Tuesday morning interview on 93.7 The Fan.

“I don’t remember. … Usually [my memory is pretty good], maybe I got hit or something.” Roethlisberger joked before getting more serious.

“The plays that he makes and has made over his career are so special. And you’re right, we wouldn’t be in the places we are without him and some of those plays he makes. I think that sometimes that overshadows some of the extra stuff — the hands up, the arms up, the frustration, the pouting, things like that.

“But you know what, he’s a great football player, and he will continue to grow, as we all need to. We all need to grow. We all have things we need to grow on. I’m happy he’s on our team. I’m excited about the future with AB, so we’ll look forward to the future.”

A side note before we move on. That doesn’t sound like a quarterback that’s ready to retire, does it?

During his Tuesday press conference, Steelers head coach Mike Tomlin was asked if he thought Brown was indeed unhappy after Williams scored Sunday against the Patriots.

“Not to my knowledge,” Tomlin said.

With the 2016 season effectively ending with Tomlin reprimanding Brown publicly for his Facebook Live video, the Steelers head coach was asked Tuesday if his star wide receiver needs to work on some things moving forward. Tomlin proceeded then to give a lengthy reply.

“That’s normal operating business for all returning players. I think it’s important that they have great clarity about not only what their roles are, formally, but the informal responsibilities that are associated with those ever-growing and ever-changing roles and our conversations will be no different than they’ve been in regards to those things. But the same can be said about all the players.”

Man, this offseason is off to a drama-filled start, but I must say that I like how Tomlin has responded to all of this thus far.

Brown, on the other hand, might need to check himself a little bit moving forward. He’s due a big contract extension this offseason and while I don’t think he’s done anything to jeopardize that, you never know what the people who make the decisions are thinking and they’re the ones that matter the most.