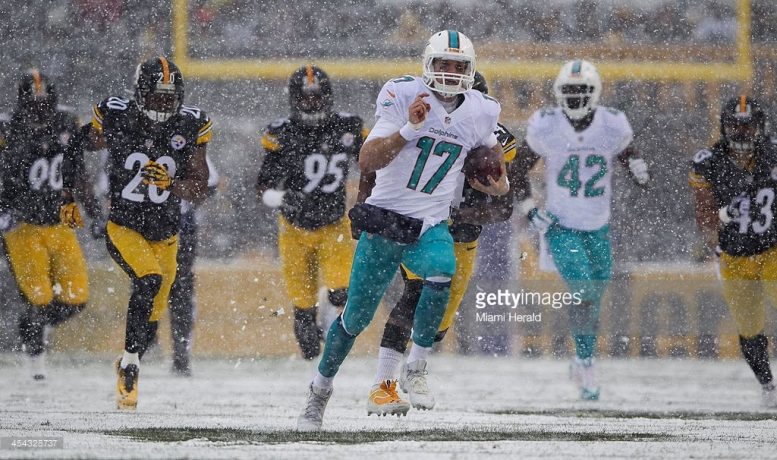 When the Pittsburgh Steelers lost to the Miami Dolphins earlier this season in the state of Florida the kickoff temperature was 81° F. When the two teams meet in again in Sunday’s AFC Wild Card game at Heinz Field in Pittsburgh it will be much, much colder.

As of Tuesday afternoon, weather forecasts are calling for a mix of clouds and sun early on Sunday before becoming cloudy later in the day. A high 21° F is expected along with winds out of the WNW at 10 to 20 mph. Even though it will be bitterly cold for Sunday’s game between the Steelers and Dolphins, head coach Mike Tomlin doesn’t believe his team will have an advantage over their Florida-based opponent because of that.

“I just don’t subscribe to that, I never really have,” Tomlin said Tuesday when asked if it’s hard for warm-weather teams to play in the north during the playoffs. “When I was in Tampa, we talked about cold-weather teams coming down there and dying on the vine in September. As a defensive coach down there, if we didn’t get off on third down, we died on the vine in September.

Hard to argue with Tomlin’s response and especially being as the Dolphins beat the Steelers 34-28 during the 2013 regular season in a game that featured snow and a kickoff temperature of 25° F.

While the Steelers might have more “Florida guys” on their team than the Dolphins do, they also have more players with playoff experience. The Steelers current 53-man roster includes 37 players who have appeared in at least one playoff game while the Dolphins have just 12 players on their 53-man roster who have appeared in a playoff game. Of those 12, three own a Super Bowl ring, while the Steelers have five such players.

No, the Steelers probably won’t have an advantage over the Dolphins on Sunday due to the weather as both teams still have to play in it. What they will have, however, is a home field advantage and a roster full of players who are already used to playing in the postseason.