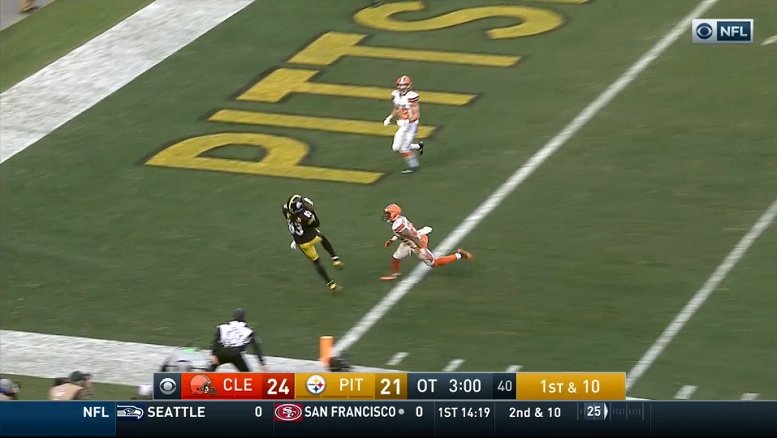 It always seems as if every catch Pittsburgh Steelers wide receiver Cobi Hamilton makes is an important one.

The journeyman is hoping he has finally found a home in Pittsburgh.  Hamilton was an All-SEC receiver at the University of Arkansas setting school records in receptions and yards his senior year.  He even had 303 yards in a single game, but he has had trouble staying on one team since he got drafted.

Hamilton was drafted by the Cincinnati Bengals in the 6th round in 2013, but never made it off of their practice squad.  In 2014, he was signed to the Philadelphia Eagles practice squad, but was released a few weeks later.  Just a week after he was re-signed by the Bengals and was eventually promoted to the game day roster on Christmas Eve.  Although finally on a 53-man roster, he never received a catch, so the journey continued.

In July of 2015, Hamilton was released by the Bengals, but quickly scooped up by the Miami Dolphins.  While making their final cuts to trim down the week one roster, Miami released him.  The Carolina Panthers then signed Hamilton to a futures contract in January of 2016, but even the depleted wide receiver core of Carolina would not be his home.  During the summer of 2016 the Steelers signed Hamilton to a one-year deal for $460,000, but right before the season started he was cut and signed to the practice squad.

Due to the Steelers wide receivers getting injured left and right, Hamilton was promoted to the game day roster on October 15th.  Just one day later he caught his first NFL touchdown pass from Ben Roethlisberger– the career had finally begun.

Today his first real regular season came full circle as he caught the game winning touchdown to give the Steelers the walk-off win in overtime against the Cleveland Browns.  Hamilton has shown glimpses of what he could be if he was put into a bigger role in an offense.  On the game winning drive, Hamilton also produced a crucial 3rd down catch for a first down.

Hamilton ended the 2016 regular season with 234 yards on 17 catches and 2 touchdowns.  With questions surrounding the situation with fellow wide receiver Martavis Bryant, the Steelers have been searching for a complete number two wide receiver to play opposite Antonio Brown.  While Hamilton has yet to show he can be that, he will have a chance this post season to continue to show the Steelers front office why he should return to the team next year as a re-signed exclusive rights free agent.