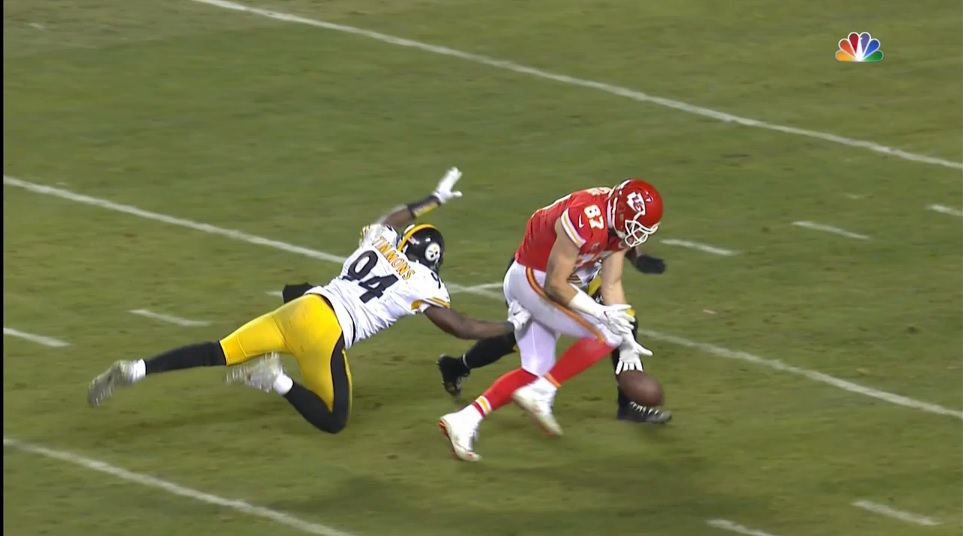 It wasn’t very pretty, but the Pittsburgh Steelers were able to hang on late for a big 18-16 win over the Kansas City Chiefs in Arrowhead Stadium, securing another trip to the AFC Championship Game to take on the New England Patriots in Foxborough.

A few clutch throws from Ben Roethlisberger on the final drive and a career-high playoff performance from Le’Veon Bell led the Steelers to the win.

With that said, like I do every week I’ll take my best shot at grading the Steelers positional group performances.

On the road, Roethlisberger is historically average to below-average. On Sunday night it was much of the same as Roethlisberger struggled with tipped passes at the line, including one that fell for his only interception of the game in the end zone.

Roethlisberger finished 20-for-31 in the win but passed for just 218 net yards with the one interception. At times, it felt like the veteran signal caller was trying to force some throws into tight windows, but at the same time he also benefited with some wide-open receivers to throw to.

But at the end of the game Roethlisberger came up big with two late throws, hitting Eli Rogers to set up a third and short before rolling out to find Antonio Brown for the first down to seal the win on the road.

That being said, Roethlisberger — and the offense as a hole — has to be so much better in the red zone next week if they want to advance to the Super Bowl for the ninth time in franchise history.

Bell had a long of 38 yards on the day, showcasing his terrific patience and wiggle in the open field. Right from the start the Chiefs had no answer for No. 26 on the ground, which made it easy for the Steelers to march up and down the field all night long.

Brown dropped a touchdown pass in the end zone, allowing Marcus Peters to wrestle the ball away, but the star wide out did finish with six receptions for 108 yards in the win.

Rogers had a quiet night, having a potential touchdown go through his hands on a leaping try. The second-year receiver finished with five receptions for 27 yards but came up with some big catches down the stretch.

Demarcus Ayers and Cobi Hamilton added one catch each for six and four yards, respectively. That being said though, the two receivers were non-factors in the win. That has to change next week.

How about a huge game from Jesse James in a big spot? Not bad for a guy who is hit or miss in this offense.

The second-year tight end hauled in five receptions for 83 yards on six targets, often finding himself wide open in the middle of the field for big gains.  On a night in which the Steelers needed another pass catcher to step up in a big way, James came through when the Steelers needed him the most.

I mean, how great is this unit up front?

Against a tough front seven, the Steelers rolled up and down the field on the ground as Alejandro Villanueva, Ramon Foster, Maurkice Pouncey, David DeCastro and Marcus Gilbert got a great push off the ball, allowing the Steelers to routinely pick up chunk yardage on the ground.

In the passing game, Roethlisberger was touched just once or twice, including one sack against a tough pass-rushing tandem of Justin Houston and Dee Ford off the edge.

If you want to see why the Steelers are moving on despite kicking just six field goals, put on the tape of the offensive line.

The Chiefs ran for 4.4 yards per carry on just 14 carries, but playing with just two down linemen much of the night, Stephon Tuitt and Javon Hargrave had their fair share of plays.

Tuitt had one tackle on the night, but he did much of his damage as a pass rusher, recording two QB hits on Alex Smith, while Hargrave added two tackles up front, including one tackle for loss.

Keying in on Travis Kelce and Tyreek Hill all game long, the Steelers defense had a terrific game, and it started with the linebacking corps of Ryan Shazier, Lawrence Timmons, James Harrison and Bud Dupree.

Off the edge, Harrison and Dupree were terrors all game long as Dupree’s hit on Smith forced an interception in the first half, while a great pass rush from Harrison in the fourth quarter wiped out KC’s two-point conversion, leading to the two-point win.

Shazier and Timmons didn’t have their normal number in tackles against the Chiefs, but both were mostly solid in coverage against the speedy KC offense that focused on crossing routes against linebackers.

Mike Mitchell had a terrific game, coming up with some big run stops in the open field while also jarring the ball loose from Kelce deep down the middle of the field in the first half.

Sean Davis took a bad penalty on a huge hit against Chris Conley near the goal line, but I’m not sure what the young defensive back is supposed to do there. A few plays later Davis got dinged up but came through with a great play on KC’s second two-point conversion try to keep Pittsburgh in front.

Ross Cockrell was thrown at quite a bit on the day but mostly held his own, while Artie Burns was really good once again, breaking up a deep shot to Hill while also showing some physicality to work off blocks to make plays on the boundary.

Chris Boswell set an NFL record by drilling six field goals, which also happened to be the second time this season he’s done that, leading to a Steelers victory.

None of his kicks were concerning as he split the uprights each time with plenty of room.

Boswell also did a good job of kicking the ball deep on kickoffs, forcing Hill to kneel down after squibbing one early, giving KC great field position which lead to a touchdown.

Jordan Berry was rarely called on during a game in which the Steelers dominated offensively, punting the ball just once for 35 yards while angling it away from the dangerous Hill.

Kick coverage units were good for the most part as Vince Williams set the tone early with a massive hit on Hill to pin the Chiefs back deep. The Steelers never really let Hill get going, which is something NFL teams haven’t been able to claim in the second half of the season against the Chiefs.

Kick returning is still an issue although Justin Gilbert and Sammie Coates showed flashes. It’s still a major work in progress, though.