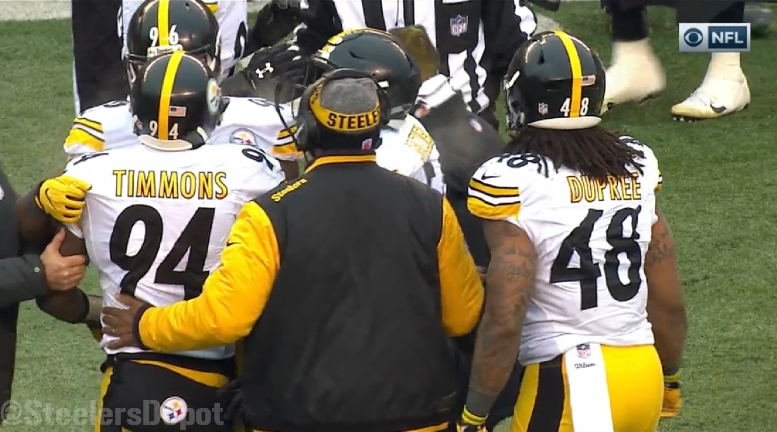 Well, let’s call it a less thrilling game than last week, but I think you’ll take that every year in Week 17.

Sean Davis: Davis put an exclamation point on a strong rookie season, ending the day with his first full sack and picking up a forced fumble when the Cleveland Browns went into full Browns mode and botched a shotgun snap. He continues to be a physical and mostly reliable alley defender against the run. Really fun to watch him improve in such a short amount of time.

DeAngelo Williams: He was asked to create a lot of plays for the Steelers’ today. Perhaps his biggest ones were somehow falling out of his own end zone, twice, to avoid a safety. And though Landry Jones darn near got him killed on his touchdown, Williams eluded the linebacker, and dove across the end zone for the Steelers first points of the game, shortly before the first half wrapped up.

Bud Dupree: Dupree had a sack/forced fumble and it was a really pretty play. Granted, against Cam Erving, an awful linemen playing right tackle for the first time all season. He separated, dipped the corner, got to the QB, and finished the play. On the day, he finished with seven tackles, five of which were solo.

Darrius Heyward-Bey: Some impact on the box score, a lot of impact away from it. He made the tremendous hustle play of the afternoon, tracking down Briean Boddy-Clahoun’s long interception return and swiping the ball out right before he crossed the goal line, which the Steelers recovered and got the ball back.

The Steelers would score on the next drive and tie the game up.

Offensively, he won a jump ball that set up another score. Nice to see that back in the offense and hopefully more to come in the playoffs.

Demarcus Ayers: A great continuation of the game he had last week. It wasn’t all perfect, there was an ugly drop sandwiched in there, but he showed the acceleration his pre-draft numbers didn’t suggest (but his tape did). We’ll have a good breakdown of his touchdown for the morning.

Jarvis Jones: Some love to the big fella, who may be playing in his final game with the Steelers. A sack and a forced fumble, the latter at the very end of the game when the Browns seemed certain to win the game? That’s good stuff. Hats off to JJ.

Tyler Matakevich: He didn’t get a run on defense today but he was his usual stellar self on special teams.

Daniel McCullers: Nice day for Big Dan. Ran through a rookie center on a sack and in overtime, worked off a block to stuff one run. He flashes just enough for you to dream of how good he could be but likely will never become.

Cobi Hamilton: All this guy does is make big plays. Third down, combat catches, and this afternoon, the game-winning snag. He’s been a great find and a valuable member over this win streak.

B.J. Finney: His starts at guard were great. His one at center? Let’s call it the opposite of that. The big difference could be when he played guard, they were against 3-4 fronts (Buffalo, Kansas City) where he was uncovered. Today, he went against a 3-4 front, meaning he was covered by the nose. And a very good one to boot, Danny Shelton, who generally had his way with him.

Blitz pickup and recognition may have been an issue too. Something we’ll look closely out during the week.

Offensive Line: We singled out Finney in particular but truthfully, the entire starting five didn’t play well. The Browns’ run defense isn’t very good, though maybe not as bad as the numbers would suggest, but run lanes weren’t plentiful today. And the pass protection could’ve been better too. Throw in a couple penalties, a false start on Ramon Foster, a hold on Alejandro Villanueva, and you hope – and need – for better days next week.

Eye Discipline: A big reason for the Steelers’ defensive problems early in the game. Struggled to react to the playaction and misdirection of Cleveland’s offense. Not nearly as disciplined as they were against the Buffalo Bills, who do similar things.

Jesse James: Sorta reaching here but was hoping for a more impactful game in Ladarius Green’s absence. The safety made a nice play but would’ve liked to see James come down with his red zone target. That’s his game. Ends the day with two catches for 16 yards.