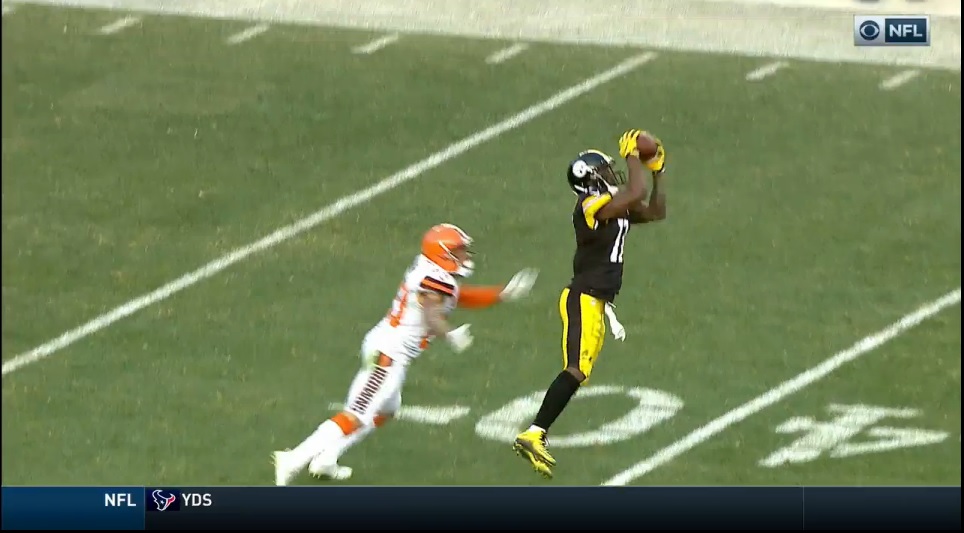 Mike Tomlin said it was business as usual.

For the first half, it felt more like business casual.

But as has become the Pittsburgh Steelers’ way of life over the last three weeks, they mounted another comeback and knocked off the Cleveland Browns, winning in overtime 27-24. It was a touchdown, not a field goal as the score might suggest, that put Pittsburgh over the top, Landry Jones hooking up with Cobi Hamilton from 26 yards out and near the left corner of the end zone. It capped off a downright surgical drive by Jones, nine plays, 75 yards, including a 4th and 2 completion to Demarcus Ayers to keep things going.

Starting the game wasn’t surgical; it was more like pulling teeth. Pittsburgh punted on their first five drives, gaining double-digit yards on a possession just once.

It gave Cleveland opportunity and field position. After an opening series punt of their own, Robert Griffin III took Cleveland on a 55 yard drive. It ended with a playfake to the left, shifting the Steelers’ defense, and then a roll to the right, hitting tight end Seth DeValve in the flat and him crossing into the end zone to go up 7-0.

Two possessions later, Grffin carved up the Steelers’ defense again, going 7/7 and finishing with a four yard slant to Gary Barnidge for another six.

The Browns were driving late in the first half but Griffin forced a ball at the goal line that was snagged by Ryan Shazier. Again though, the Steelers couldn’t do much with it and promptly punted the football away. But Cleveland offered up a reminder that they were a 1-14 team, botching the first snap of their drive over RGIII’s head. Sean Davis recovered and Jones finally breathed life into the offense.

With barely more than two minutes to go, he conducted a seven play, 37 yard drive. A checkdown to DeAngelo Williams, where the back shook off a hard-charging linebacker, served as the Steelers’ first score of the game, 14-7, and they way things ended for halftime.

Late in the third quarter, Jones was picked by rookie Briean Boddy-Calhoun, who snagged it at his own 32 and nearly returned it to the house. But Darrius Heyward-Bey tracked him down across the entire field, swiping the ball out at the one, which then tumbled into the end zone and was recovered by Jones. Ruled a touchback, the Steelers caught the biggest break of the day and the Browns had their season summed up.

With their second chance, the Steelers marched ten plays, 80 yards to tie the game. The run game finally got going with gains of 12, 10, 8 from Williams before he finally plunged in from one yard out.

Williams ended the day with 23 carries for 67 yards and that score. He caught three passes for another touchdown.

After the Browns’ Cody Parkey missed a 49 yard field goal wide left early in the fourth, the Steelers took over with good field position. Finally having settled in, they scored with little resistance. Jones found DHB for 46 yards down the left side and Ayers capped things off with an 11 yard score, the first of his career. Pittsburgh went up 21-14, their first lead of the day, with five minutes left.

But the Browns had an answer back. Isaiah Crowell busted a 67 yard run, weaving across the field and George Atkinson III barreled into the end zone on the next play. The Browns opted against going for two with 3:28 remaining and tied it up with the extra point.

Crowell had a great day with 152 yards on the ground and exactly eight yards per carry. The Browns ran for over 230 yards on the afternoon.

From there, things got weird. And long-lasting. Cleveland got the ball back and following a 43 yard completion to Terrelle Pryor, had the ball at the Steelers five with under a minute left. But Crowell had the ball knocked out by Jarvis Jones on the next play, recovered by Mike Mitchell, and the game would go to overtime.

Cleveland got the ball first and after several penalties, had the ball on Pittsburgh’s two yard line and first and goal, but properly Browns’d things up, and were forced to settle for a 34 yard field goal to go up 24-21.

Pittsburgh got the ball back with one last chance and cashed in. Jones found Rogers three times and Hamilton twice on the drive, including the game-winning 26 yard score with three minutes remaining.

Jones’ rocky day finished out with 24 completions on 37 attempts, 244 yards, three touchdowns, and a pick. He was sacked four times. Rogers led the Steelers in receptions and yards, six and 61, a very slot receiver type line. Defensively, Sean Davis led the team with nine tackles while he, Bud Dupree, Daniel McCullers, and Jarvis Jones had sacks.