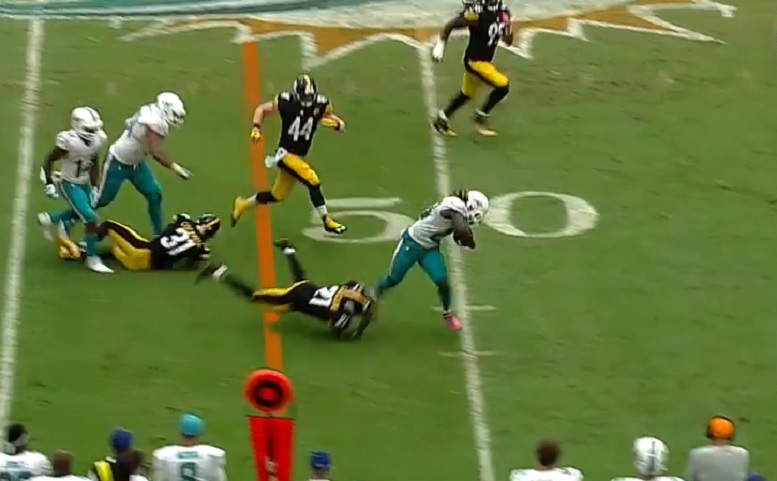 Miami Dolphins running back Jay Ajayi certainly ran all over the Pittsburgh Steelers defense back in Week 6 and with the Wild Card rematch just days away from taking place at Heinz Field, it’s time to review what went wrong that led to him gaining 204 yards in that October contest at Hard Rock Stadium.

In case you forgot, Ajayi had 6 runs of more than 10 yards against the Steelers back in Week 6 and those accounted for 154 of his 204 yards on the ground. We’ll revisit those 6 runs in the order that they happened and where the Steelers defense failed on each of them.

On this first quarter shotgun counter play by the Dolphins that gained 12 yards, we see Steelers outside linebacker Jarvis Jones get stuck inside by the tight end for starters. You’ll also see safety Robert Golden, the force defender on the play, get cracked from the outside. Whenever that happens, the outside cornerback, which in this case is rookie Artie Burns, must replace Golden as the force defender to prevent the running back from getting to the edge. Burns, as you can see below, allows himself to get sucked inside and that gives Ajayi plenty of room outside.

In the second quarter, Ajayi struck again for 14 yards on a simple counter play and one we see the Steelers offense run quite a bit. At the snap of the football, Steelers right defensive end Ricardo Mathews is initially turned inside by Dolphins left tackle Branden Albert. The weak inside linebacker on the play, Vince Williams, follows the pulling right guard all the way over to his block on right outside linebacker James Harrison and in doing so, he makes things easy on the trailing tight end. This results in a huge lane for Ajayi, who then gets more second level help thanks to the left guard’s nice block on inside linebacker Lawrence Timmons. A few broken tackles later and Ajayi has a gain of 14 yards.

In the third quarter, Ajayi registered his first explosive run of the game and this looks very similar to the first run I broke down in this post. Once again, Burns fails to replace a cracked force defender in Golden and the result is brutal. On top of Ajayi gaining 20 yards on the play, 15 more yards were added on to that as safety Mike Mitchell was flagged for a hitting the Dolphins running back out of bounds. I’m willing to bet Burns didn’t have a fun week in the film review sessions that took place.

On this third quarter explosive run by Ajayi via an outside zone play theres a lot to look at. First, watch Williams try out his best impression of fellow inside linebacker Ryan Shazier by shooting a gap behind the front side. Left defensive end Stephon Tuitt is put down on the ground and once again we see Golden cracked from the outside by a wide receiver. Cornerback Ross Cockrell is late replacing Golden and is forced to dive at that feet of Ajayi and the Dolphins running back is once again off to the second and third level pretty much untouched.

The Steelers defensive was bitten again by a simple Dolphins counter play again in the fourth quarter. On this play, look at the defensive personnel on the field for the Steelers. Defensive tackle Daniel McCullers has replaced Tuitt in the nickel front and Tyler Matakevich has replaced Williams due to injuries. McCullers gets himself walled-off to the inside by the Dolphins right tackle while Matakevich is slow getting to the pulling left guard. Golden is cracked again from the outside and possibly held. While Cockrell replaced Golden and eventually made the tackle, Ajayi still manages to get 5 or 6 more yards before finally being brought down.

The Steelers defense got stung one final time by Ajayi late in the fourth quarter with Pittsburgh down 8 points and needing a quick stop following a failed onside kick attempt. This time, another outside zone run does the Steelers defense in as outside linebacker Anthony Chickillo gets stuck inside for starters. With Timmons effectively blocked at the second level by the tight end and Mitchell and Cockrell both locked up on the edge, Golden has a shot at bringing Ajayi down just past midfield but fails to do so. 49 yards later, Ajayi is in the end zone with a 200-plus yard rushing game.

Hopefully the Steelers learned a lot from this loss when it comes to them potentially not allowing Ajayi to have a repeat performance on Sunday at Heinz Field. There’s reasons to believe we’ll see a better showing from the Steelers run defense this go-around as Williams, Chickillo, Golden, Matakevich and Arthur Moats are all unlikely to see any playing time barring injuries. Remember, Shazier didn’t play against the Dolphins in the Week 6 game and nether did rookie safety Sean Davis and outside linebacker Bud Dupree. On top of that, Burns should have learned a lot from that Week 6 loss to the Dolphins when it comes to replacing a cracked force player.

Rest assured that the Steelers offensive card team ran these same plays above all this week during practice in effort to prevent a repeat performance by Ajayi.